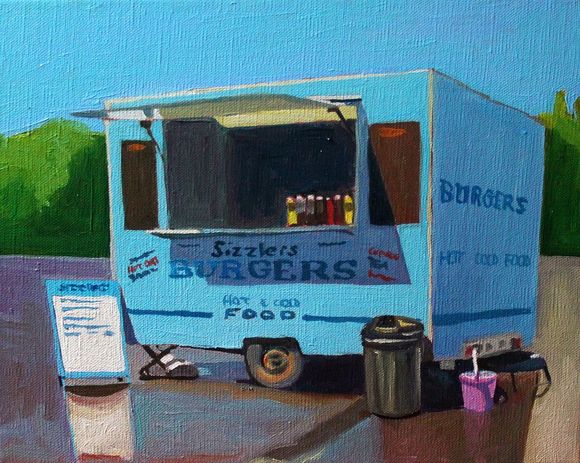 This painting of a burger van I spotted in Wickes’s (DIY Store) carpark in Swansea is part of my “urban minimal” series. I have been influenced by the treatment of light and colour by American realist painters such as Edward Hopper, Jim Holland, John Register, Frank Hobbs as well as by Contemporary minimalists such as Christopher Benson, Leah Giberson, Tom McKinley, Jessica Brilli and Emmett Kerrigan. I aim to bring an American sensibility to a Welsh urban landscape – I half-jokingly call this sensibility “Cymricana” – like Americana only Welsh. Instead of sunshine in a NY diner, its sunshine on burger van surrounded by puddles in a Wickes’ carpark.

2 thoughts on ““Cymricana” – Sunshine and Puddles”