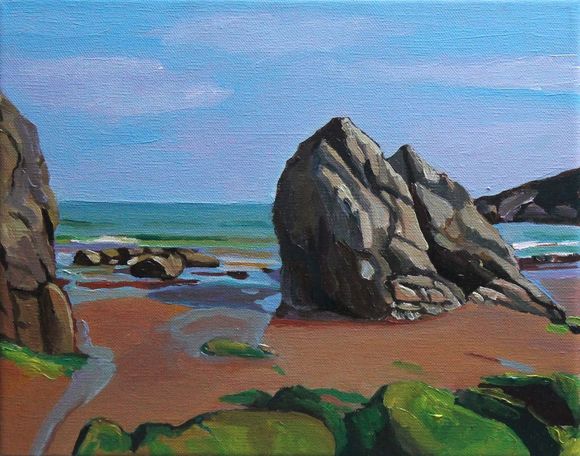 One of the many, many beautiful beaches that dot the glorious coastline of Gower peninsula. Brandy Cove, is located half a mile west of Caswell Bay, and can be reached by the undulating coastal in about 20 minutes.

It is probably Gower’s most infamous beach and is steeped in history and legend. The small cove gets its name from the days when smuggling was rife on the Gower Peninsula and the sands were used to land illicit cargo of tobacco and alcohol. At high tide, only the rocks of the bay are visible. At low tide a small apron of pebbles and sand are revealed by the retreating sea.

It was a very hot summer day when I visited and the cool sea water was an absolute delight to paddle in. At one point that afternoon, there was a large tan dog lying in the shadow of the rock, cooling off. I was drawn to the beautiful dark sand colour after the tide has retreated and the various colours of the monumental Rock in the sand. I really liked the sharp green of the seaweed temporarily stranded at low tide on the rocks in the foreground.  When the tide retreats even further you can walk out past the headland and see Caswell Bay to the East.