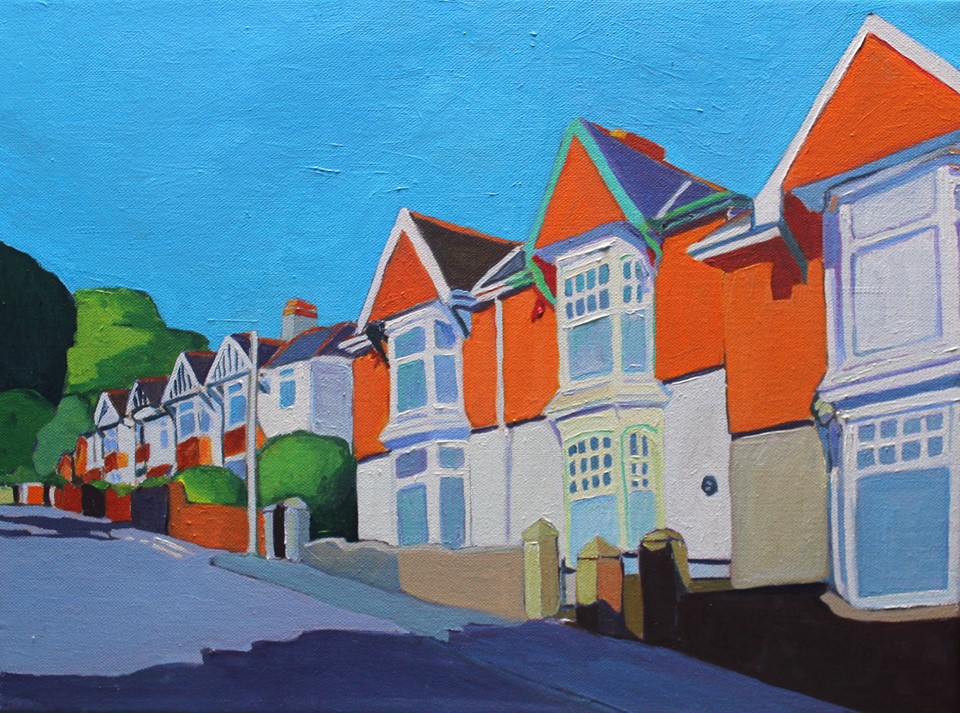 As a trained Historian as well as being an artist, I feel the need to place my “urban minimal” paintings in context. I think it helps me understand the city around me too. Swansea is a town in which nothing in particular has happened. There was no workers’ rising (Merthyr and Newport), no cross-dressing protests (Rebecca Riots to the west of here) although Emily Phipps and the suffragettes were pretty active here in the years before the First World War. Again and again I come back to Poet Dylan Thomas who grew up here.

“Metroland” or “Metro-land” was the name dreamt up by advertisers for the new commuter belt communities to the north-west of London that was served by the Metropolitan Line. The 1920s and 1930s saw the rapid growth of new houses often in a mock Tudor/rustic style. In Wales, the presence of swathes of brand new Metroland-style houses signalled that the middle classes were as respectable (or “tidy”) and as well off as those in England. This was in stark contrast to the working-class mining communities in the South Wales during the Great Depression. They were experiencing destitution and extreme poverty. The 1930s in the Rhondda Valley was all about soup kitchens and the means test, not faux rustic idylls.

Not so in the heart of suburban Swansea. Poet Dylan Thomas, was born in an Edwardian house in 1914. His home was in the bosom of Swansea’s version of Metroland; Ffynone, Uplands and parts of Sketty. He grew up in Swansea in the 1920s, well before the Luftwaffe and the town planners destroyed the town centre. He famously wrote that Swansea was “an ugly, lovely town … crawling, sprawling … by the side of a long and splendid curving shore. This sea-town was my world.”

Writing to his friend, Trevor Hughes, in early 1934 he describes himself as “living in Metroland” in the midst of “respectability and subservient to the office clock”. This is quite ironic as Trevor lived in Harrow, outside London which was part of the original “Metro-land” served by the Metropolitan Line.

Young Dylan clearly found the respectability suffocating. Indeed, Dylan Thomas’s antics were not always to the tastes of the people of Swansea. After all, his birth place number 5 Cwmdonkin Drive, was only made into a museum and restored to its former glory in 2005. As a teenager, Dylan acted in several plays at the Swansea Little Theatre which was based in a small church hall in the sea-side village of Mumbles near to Swansea. His alcoholism was already affecting his life as he frequently needed to slip out of rehersals for a quick drink.

The Antelope and the Mermaid Hotel were closest. He later wrote about breaking his tooth playing “cats and dogs” in the Mermaid. Dylan entered wholeheartedly into the game by crawling about on his hands and knees, barking loudly and finally shuffling outside to bite a lamp post and breaking a tooth! However, when the Company producer gave him an ultimatum at a dress rehersal, he left the company.

It was at number 5 Cwmdonkin Drive that he wrote more than 200 poems in his tiny bedroom before he was 20 years old. Later in the same year he wrote to Trevor Hughes about “living in Metroland”, he left Swansea for Fulham, in London. To live with his artist friend Alfred Janes. He had well and truly left Metroland now.

5 thoughts on “Dylan Thomas in Metroland”