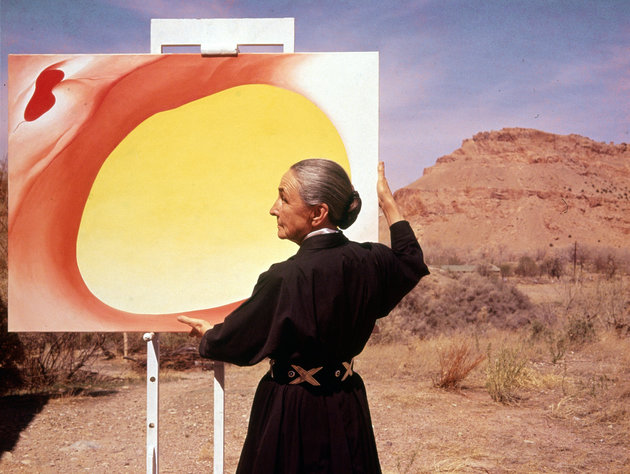 Thank you for all these suggestions. I was unaware of any of the Australian/New Zealanders but very much enjoyed finding out about them, especially Rosalie Gascoigne. It just shows me what a Euro-centric artistic education, I have had.

Georgia O’Keefe– She is best known for her paintings of magnified flowers, animal skulls, and New Mexico desert landscapes. Her Jimson Weed/White Flower No. 1 1932, the most expensive painting by a female artist ever sold at auction. I have never been that excited by Georgia O’Keefe’s work but I suspect that if I saw one of these massive works in real life, I feel diferently about them.

Rosalie Gascoigne, was a New Zealand-born Australian sculptor. She was one of Australia’s leading avant-garde artists. She was also a phenomenon. She did not begin her artistic career until she was in her fifties. She’s an inspiration to all us middle-aged artists. She had her first solo exhibition in 1974, at the age of 57. She showed at the Venice Biennale in 1982, becoming the first female artist to represent Australia there.

Emily Kgwarreye, was an indigenous Australian artist from the Utopia community in the Northern Territory. She is one of the most prominent and successful artists in the history of contemporary indigenous Australian art. Her painting, Earth’s Creation 1, sold for $2.1 million (£1.2m, I think) at auction in Sydney in November 2011. I love the sheer scale of these works.

Margaret Preston, was one of Australia’s most significant artists. She was a key figure in the development of modern art in Sydney from the 1920s to the 1950s. Renowned for her paintings and woodcuts of local landscapes and native flora, she was an outspoken public voice on Australian culture and championed a distinctly Australian style, based on the principles and motifs of modernist, Aboriginal and Asian art.

Grace Cossington-Smith, she is one of Australia’s most celebrated 20th century painters. An important early exponent of modernism in Australia, her work formed part of the first significant wave of Australian responses to European post-impressionism. A brilliant colourist, she drew her subject matter from the familiar surroundings of her home and her experience of Sydney city life, which she transformed into vibrant images of light-infused colour.

Clarice Beckett, nowadays she is recognised as one of Australia’s most important modernist artists. She was a tonal painter and she relentlessly painted sea and beachscapes, rural and suburban scenes, often enveloped in the atmospheric effects of early mornings or evening. After her death her work fell out of fashion and her work was largely forgotten for over 30 years. In 1970 thousands of her neglected paintings were rediscovered in a farm shed in rural Victoria which prompted renewed interest in her work. Her work surprised me, I thought it was very European in tone. I usually associate Australia with strong sunlight and these gentle, hazy works were a revelations.

I have one final installment to make. I thought that these works were so powerful that they deserved “space” to breathe rather than being crammed into an overlong list. If you have any more suggestions as to who I should include please add them in the comments section.