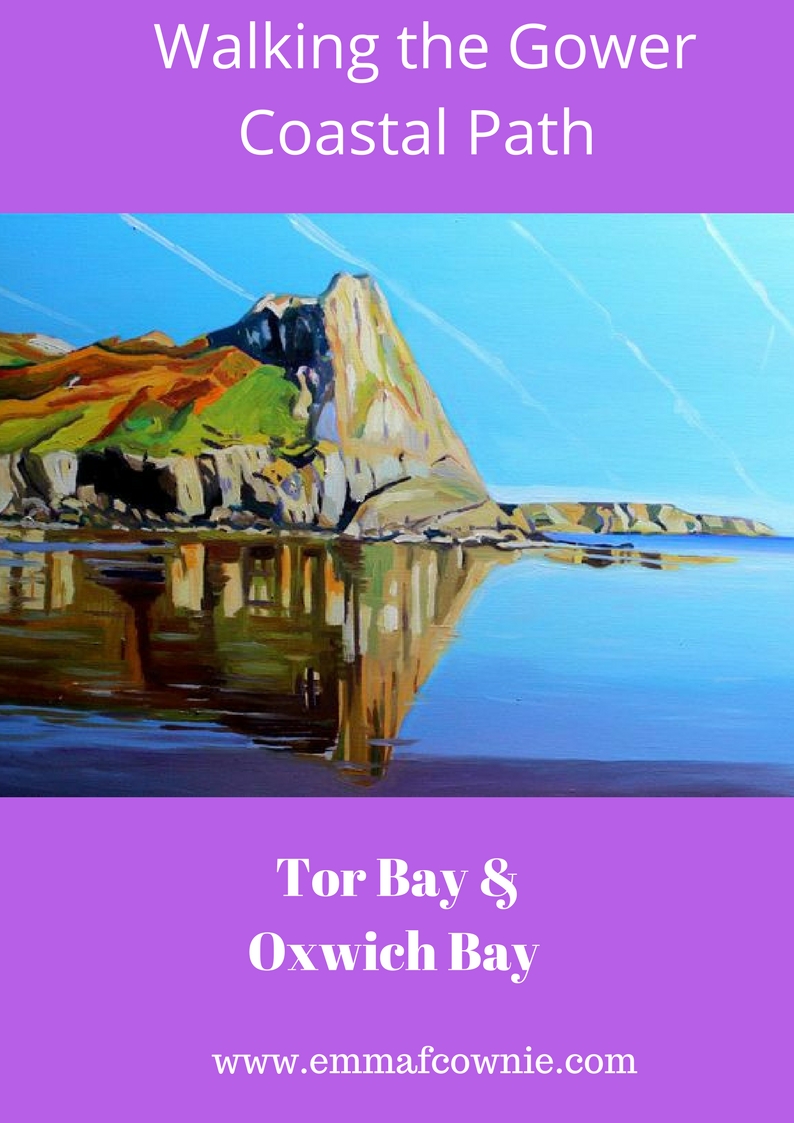 I am shattered. My legs are so stiff, I can hardly walk up and down stairs. I have been this way for days. My problem is that I can do activities, running, yoga, walking but often “pay for it”afterward. I don’t really understand how much this is to do with life post-PTSD, if at all because you never fully recover from PTSD, but you learn to manage with what you have. Maybe it’s middle age. Maybe I do too much or just can’t tell when I am doing too much. I am pig-headed. When I see a sunny forecast I am looking at maps and bus timetables and planning my next walk. OK. A word about bus timetables. The ones for Gower are very confusing. The ones for the Swansea (including Limeslade, Caswell and Pennard Cliffs) are great. I understood them. The buses ran frequently. Once you get past Pennard Cliffs and change bus companies, however, the timetable becomes impenetrable. I have spent hours looking at the little rows of numbers and columns of place names trying work out how they connect or don’t. I have woken up in the night worrying how I am going to complete this coastal walk. It seems that I can get to several of the places I want to go in the morning OK; Oxwich, Rhossili, Llangennith (if I can get to the bus stop at 7.40am). It’s the coming back that’s a much dodgier affair. There seems to be one bus in the late afternoon. Maybe. If I have downloaded the correct timetable from the internet as there often seem to be several versions and I am not sure when one is the one the bus drivers will be using (see my earlier blog for my rant about lack of tourist or bus information.in Swansea). Part of the problem is that I am trying to get to places outside the main tourist season June-August when there are slightly more buses running. Maybe this wouldn’t matter if I knew that I could walk 20 miles in a day, or 11 miles, but so far I have only done 3 or 4 miles and found them pretty tiring. So this is a long-winded way of saying that I have broken my rules. Just to remind you. They are:- 1. Travel in a clockwise direction around the Gower coast 2. Travel by public transport and by foot. 3. Walk on sunny days. So Rule No. 2. I’ll fess up. For some parts of the coastal walk, I got in my car and drove to the places that I was struggling to figure out the public transport links for. That was until Ceri from woman walking blog recommended traveline.com to me. Rule 1. Clockwise direction? Not always. This particular walk was done in two parts. The first from Tor Bay in a westerly direction (with both human and canine company) on a breezy, sunny day but the second part was done from Oxwich (alone) in an easterly and thus anti-clockwise direction (and looped back to my car). It wasn’t very sunny. So I broke all the rules on that day. It didn’t feel good but nevermind. I’m just doing it badly. It’s a coping strategy. I came across it recently. The thinking goes, if you are paralyzed by anxiety and a fear of failure: “Just Do It, Badly.”Once the summer bus timetable is action, perhaps I’ll be a perfectionist and do it “properly”. We’ll see. I’ll pick up from last week’s blog about Three Cliffs Bay. The climb up from western side of Three Cliffs Bay itself is pretty tiring as its very sandy but the view at the top is worth every bit of the struggle. At the top is an Iron Age fort. The Iron Age was a very long time ago – about 2,500 years.  It has a fantastic view of Three Cliffs Bay (the ramparts are covered in primroses).

Following the coastal path around the very windy edge of the cliffs, you eventually reach around the top of Great Tor and Tor Bay below. At low tide Tor Bay can be reached by walking along the beach from Three Cliffs Bay in the east and also from Oxwich Bay in the west, but at high tide the sea cuts off the little bay. It then can only be reached by a path down from the cliffs. This path is very sandy at the bottom end making it considerably easier to walk down than up it! This is a detour and not part of the coastal path walk! It was a windy day and the clouds and their shadows were racing across the sands. It was really delightful watching the light and colours change on the cliffs tops and beach. We saw only three people and one day on this mid-week walk.

My two canine companions Biddy and Mitzy had a great time, especially when they found something really stinky to roll in, on top of Little Tor. There were streaks of “it” in their coats. Like brown dog-highlights. Urgh! It smelt really bad even out in the fresh air, despite a dip in the sea. It was even worse in close quarters in the car home. Needless to we drove with the windows open and they were bathed as soon as they got through the front door with lots of lovely dog shampoo. On the path above Tor Bay is a curious stone building with two archways going nowhere. A useful shelter if you are caught out in the rain or in a hail storm was we were a few months back. It’s actually a lime kiln. Gower is dotted with these buildings in which which limestone was burnt or calcined to produce quicklime. The path then undulates along the headland until it reaches little five bar wooden gate with a wonderful view of Nicholston Burrows (dunes) and Oxwich Bay on the other side.

The path continues until you are given the choice of carrying on down through the woods on the right on down to the sandy beach on the left. I took the long sandy path through the dunes down to the beach, the smell of the sea calling me all the way. If the tide is out you can then loop left round to Tor Bay or right and walk along Oxwich Bay.

Oxwich Bay is a wide expanse of water and sand. It’has a sandy beach which is about 2 1/2 miles long, flanked by sand dunes, patterned by a maze of tracks. Beyond the dunes lie lakes, woodlands, salt and freshwater marshes. Apparently, it’s rare to have so many different habitats in such a relatively small area in the UK. They are all part of the Oxwich nature reserve.

The beach and the dunes are bisected by Nicholaston Pill, a small river that flows out from the marshland and reeds. I’d forgotten that there’s a little wooden bridge over the river, tucked away in the dunes.

There was a middle-aged couple sitting on the sand dunes with their dog. I stopped and we had a long chat, in which we discussed in quick succession; the weather, buses, Cardiff, Swansea’s one-way traffic system, the council, the Slip Bridge and buses again. Eventually, after a very long walk on soft sand, past much flotsam, I reach the end of the beach. There lies the village of Oxwich. In summer this is a very busy beach.  This is the second largest beach on the Gower peninsula after Llangennith. There is a large car park, a flat beach, a cafe, and toilets so it’s rather popular with visitors, apparently, an incredible a quarter of million of them each year!

There are several caravan parks within walking distance too. When we first came to Gower we used to come here and I once attempted to surf here. It didn’t go well as I paddled too far out and got scared. Set just a step back from the beach is the Oxwich Bay Hotel. It is an imposing building, its steeply pitched tiled roof reminding me of French architecture for some reason. The tiny village Oxwich lies on a road leading inland from the sea. That because this was not a fishing village. It probably won’t surprise you to learn that the woodland areas of Oxwich were quarried for limestone and exported, using Oxwich bay as a small port.  So the cottages of Oxwich were once the homes of the local quarrymen. At the start of the Napoleonic Wars, in which Britain declared war on France, the Royal Navy was forcibly “recruiting”, or press-ganging, men from communities situated along the British coast. This included the Gower coastline. Late one Thursday evening in October 1803, the HM Press Gang called at Oxwich and took 5 sailors, one of whom was a ship’s boy, who had happened to come ashore from a merchant vessel.

Once upon a time, all the houses in Oxwich would have been thatched. Now few are except the cottage that has gained fame for being the place the Methodist Minister, John Wesley once stayed in 1764. It was known as the “Nook”. The well-traveled Wesley was impressed by the people of Oxwich as he noted in his diary that “all the people talk English, and are in general, the most plain, loving people in Wales’. There is no pub in Oxwich and it has been suggested that the influence of John Wesley may have had a bearing here! So I broke the rules (including the staying on the official coastal path one) but I have made it past my “block”.  I have had to pay the price as must have walked for about 5 miles on the sand. Hence the very stiff calves. Maybe, next time I will take the woodland walk! I did it badly today but I did it. Next time I will walk Oxwich Head and experience mild peril.