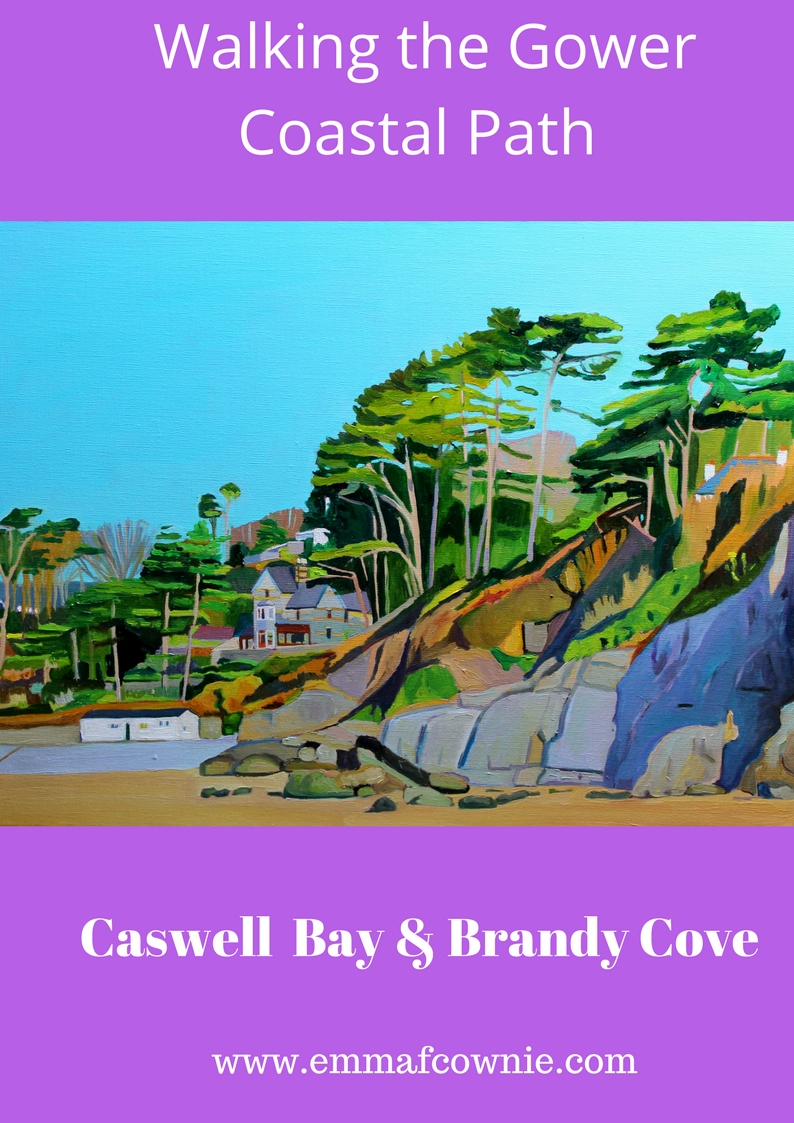 After my adventures on my first walk along (or rather off) the coastal path from Limeslade to Caswell, I was left with legs that were covered with scratches from the sleeping-beauty-brambles that smothered the path I was stupidly trying follow. I didn’t discover these until later on that day when I was in the bath. I looked down at my legs and marveled at all the scratches that I didn’t realise were there. I had walked just under 3 miles but I was very tired and very stiff the next day. My toes hurt, my legs were stiff and my back ached from carrying my rucksack.  The going up and down hills is more arduous that you’d think.

It took a weekend’s rest and a sunny forecast to tempt me out again. It was the spring Equinox. The day when light and dark are balanced before the days lengthen into spring. I got up earlier this time and caught the 9.20am 2C bus on Oystermouth Road to Caswell. The same bus driver from my first bus trip to Limeslade was driving this bus.

Unlike the bus to Limeslade that snaked all around the houses Langland before it reached its destination, the bus to Caswell is pretty direct, travelling through the villages of Mumbles and up a hill into Newton then before the long descent  of Caswell Road, past the Summercliffe Chalet park with its very expensive chalets (£150K to buy one, if you are asking). There are some very different chalets nearby, tucked away in the woods and easily missed. These chalet fields are Holtsfield and Owensfield.  They started as holiday huts but became permanent homes after families were bombed out of their homes during the second World War.

At the bottom of the hill is the beach. Caswell is a very popular beach with locals and tourists alike. In the summer the car park fills up and  if you leave too late in the day, they close the car park and you just cannot get in!

When I arrived at Caswell the tide has just turned. High tides make a big difference to how much beach there is here and all along the Gower coast. This is because the Bristol Channel has the second-highest tidal range in the world. The low tides expose vast stretches of golden sands while the high tides flood the bays create cozy bays of sheltered water. When the tide is out there is more than enough beach for everyone.

This morning, however, the high water meant that Caswell Bay was cut into two small bays.

So why are there two bays at Caswell? Apparently it because there are two neighbouring faults, one along Caswell Valley (beneath the car park) and another directly under that ugly block of apartments behind the western arm of the Bay.  At the foot of the western cliff (called Redley Cliff) runs a small brook, which starts at nearby spring.  In the past water from this stream was stored in a massive concrete cistern and supplied to the houses of the bay by gravity-feed from a wind-pump situated on the top of the cliff. You can just about make out the windmill on the top left hand-side of the old postcard below.

We have a wonderful insight into what Caswell used to look like in the mid-19th century, thanks to photography pioneer, John Dillwyn Llewelyn. John was what you might call a Victorian playboy scientist. He was very rich did not have a “proper job”. His father Lewis Weston Dillwyn managed the family-owned Cambrian Pottery in Swansea. This meant he was in the very lucky position of being able to pursue his interests in science, botany and astronomy full-time. John’s wife, Emma, was the cousin of pioneer photographer William Henry Fox Talbot and this clearly inspired John to take up this new science. John actually became a one of the most important amateur photographers in the 1850s and he took photographs of the holiday home, Caswell Cottage, he built at Caswell.

He was also an inventor of new techniques. One of his innovations was a camera shutter that allowed him to capture the movement of waves at Caswell at approximately 1/25th of a second.

These photographs of an unspoilt Caswell make me sad because in the 1960s the local planning authority decided that this beautiful bay would be “improved” by the knocking down Caswell Cottage to make a car park and also knocking down Redcliffe House (once home to the family of Dylan Thomas’s poet friend Vernon Watkins) to build the brutalist-style Redcliffe apartment block. As my husband says, “I like 60s’ architecture, but it’s like an office block has been randomly dropped into the countryside”. This makes painting nice paintings of the bay difficult because the 1960s block, in my opinion, is not very pretty. It might be great to live in, with lovely views, but its not great to look at, or paint.

Still, at least we are still left with the handsome Bay House. Three sisters Emma, Agnes and Alice Morgan built and lived in this house in 1877. The sisters also planted many of the bay’s distinctive pine trees.

If you look closely at the photo to the right you may well be able to spot a helicopter. This house is currently owned by the flamboyant boss of the Welsh supermarket chain “CK’s” who is a keen helicopter pilot. He’s got into trouble a few years ago when he flew his helicopter into Heathrow airspace and caused a security alert. In Chris Kiley’s defense he was late for lunch at a nearby country house, and although he’d been given directions he didn’t have coordinates! Its seems that he’s gone off living Caswell because the house is up for sale for £2.5 million (that’s around $3.5 million dollars).

Today, the tide was in, so I had to walk along the road, to find the coastal path. Usually I’d walk across the beach and climb up the cliff path, which is what I did in 2016 (see photos below).

I decided to take the higher path and this time I was determined to follow the map. I find it hard to follow instructions, I don’t know whether its my sense of curiosity, laziness or plain stupidity that makes me think I know a better way. Mind you, looking at my Pathfinder Guide, I realise why I find it so difficult. Although the maps are useful, the rest of the page is pretty much solid text, no gaps, bullet points, paragraphs, so its difficult to follow. No wonder I just look at the maps!

Not today. My coastal path map (picked up for free from one of those information points in Swansea) has no instructions just a big map on both sides of the page. That suits me just fine. The map tells me that the path joins the road further up the hill so I start walking. This road, however, does not have a pavement for pedestrians for much of its length so I have to keep stepping back onto a narrow grass verge when cars pass by.

Eventually, towards the top of the road I find the path and follow it although it did not feel very “coastal”. In fact the path takes a short cut across Redley Cliff and down a long flight of steps cut into the earth to Brandy Cove. I love going down steps like these.

The woods on the way from Bishopston to Brandy Cove inspired an early painting of mine; Brandy Cove Stile (see below).

Writer Wynford Vaughn Thomas called the Gower Peninsula “a secret people hug to themselves”. Brandy Cove is bit of a secret places in Gower because you can only get here on foot. You can walk down narrow lanes and paths from Bishopston village or via the coastal path. It is a little cove that is made of mostly pebbles and rocks at high tide but at low tide looks very different as golden sands stretch out into the Bristol Channel. Its a lovely place to swim in the summer and usually deserted.

I had read somewhere that it used to be known as Hareslade. All the locals call it Brandy Cove, however, thanks to the pirates/smugglers who used to maraud the length of the Bristol Channel and unload their illegal tobacco and alcohol goods here during the eighteenth century. Think Ross Polark with a Welsh accent and you’d be about right.

In the 19th century Brandy Cove was later home to a silver and lead mine, although mining had probably taken place in this area in Roman times.

One of the mine shafts was put to a much darker used in the early part of the 20th century when the dismembered body of Mamie Stuart were dumped by her murderer. Mamie, from Sunderland in the industrial North East of England, was dubbed a “chorus girl” by the local press. She had been used to a life on the stage but she’d given that that up and married Cardiff-born George Shotton in 1918 and moved to Swansea. The marriage was mistake. It was a very unhappy one and Mamie wrote to her parents complaining that her new husband beat her. After these complaints they heard no more from her. She vanished.

Her suitcase turned up in a Swansea hotel. Despite a national serach, she was never heard of again. It turned out that there was already a Mrs Shotton who was living in Cardiff with a daughter. George did 18 months’ “hard labour” in prison for bigamy, but the cad got away with murder because by the time her remains were discovered in Brandy Cove in 1961, he had been dead three years. Poor Mamie.

In my next post I carry on and visit one of Gower “hidden” villages and visit a Gower bay that many people have never heard of.