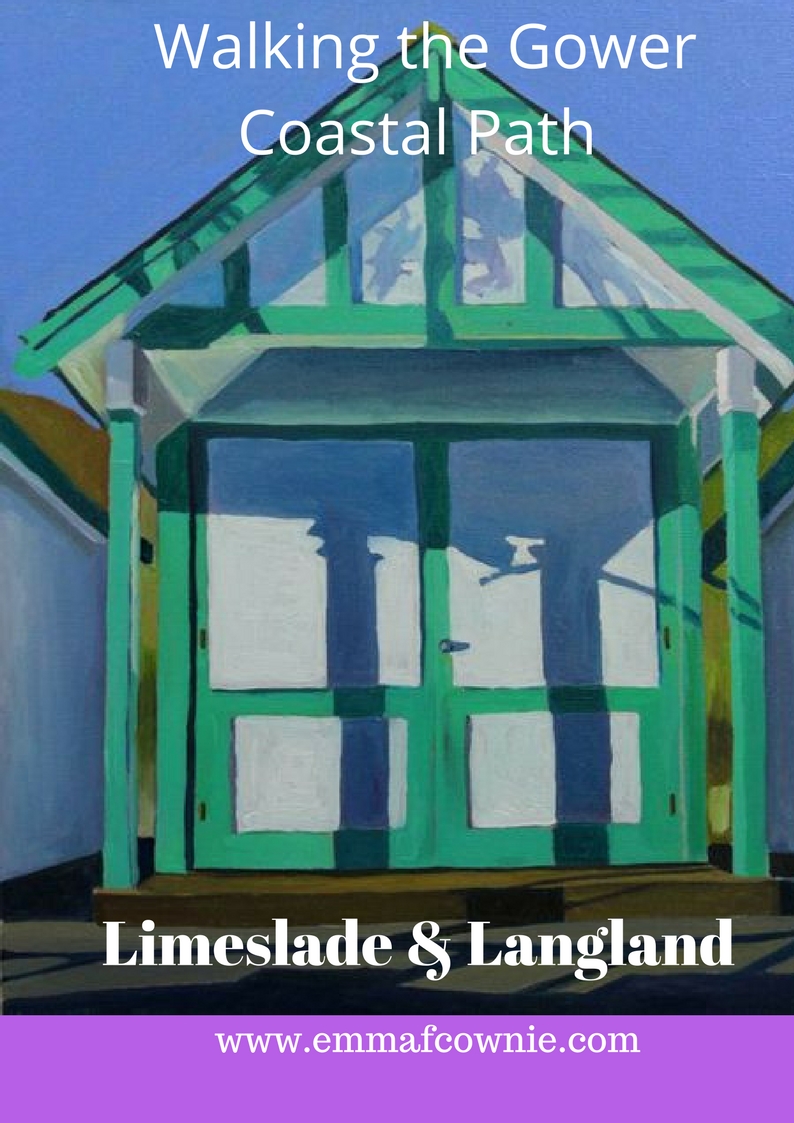 This was all my sister’s idea. She suggested I walk along the Gower coast and paint the bays and beaches. I had no idea how difficult the logistics of this would be. I had the daft idea that catching buses and walking the coastline would be easy. After all I had a jolly looking-leaflet “Gower Coast and Countryside with out a Car” with a photo of a bus on the front.

Sadly, it turns out that Swansea Council have changed their mind and aren’t that keen for walkers to come and visit this “Area of Outstanding Natural Beauty” (since 1956, you know).

I’d picked up that leaflet two years ago. I had called into the Swansea Tourist Office,  sensibly located next to the bus station. There were two helpful ladies who gave me lots of leaflets where told me where I could get up to date bus timetables.

When I tried to revisit them last week, however, I was horrified to discover that the office was closed. There was no notice about where to get tourist information. Swansea council claims that 11,100 people are employed in tourism in Swansea but they can’t find the money to fund two people and some leaflets in a tourism office!

Not to be defeated, I called by the bus station, in the hope of getting up-to-date timetables for Gower bus services. I had to wait several long seconds whilst the youth on the information desk pondered over his suduko puzzle, sighed, and looked up. When I asked about buses round Gower he tore off two A5 sheets of paper for the week-day buses to North Gower and to Rhossili. He then went back to his puzzle. I wasn’t filled with confidence about getting around the coast by public transport.

I went home to look up on the internet where the office had been moved to.  It hadn’t; it was gone. The tourist information office in Mumbles has been closed too. I emailed the tourism people for help. I was tartly informed that information was moved online and supplemented by a series of “information points” around the city where I could get help. I initially thought that these might be sort if dedicated tourism-related computer terminals. turns out that these “information points” are leaflet racks. I wqs informed by the tourism person that they were “a network of Visitor Information Points (VIPs) across the destination, offering a drop-in facility for visitors with plenty of advice, maps and leaflets at the ready!” I didn’t feel very encouraged by this. So I went back into to town to have a look. The first information point I visited was in the foyer of Tescos. There was no one to speak to here.

I then visited the foyer of the Grand Theatre where they had a number of racks filled with leaflets. There were staff there. They were sitting behind a glass screen at a counter. There was a queue of people waiting to buy tickets. When the queue went so did the counter staff. I lost heart. I didn’t think they’d thank me for asking them about buses to Port Eynon and I knew that they’d direct me to the bus station, so I left. Whilst was at the Grand Theatre, I did pick up a leaflet which spoke volumes about Swansea Tourism’s much reduced ambitions for tourism the area.

Instead of “Gower Coast and Countryside without a car”  it’s  now “Mumbles and the City of Swansea without a car.” Swansea and Gower really need the money that tourism can bring to the local economy but the local council just fail to provide the infrastructure that is needed. I’ll come back to the issue of bus timetables later, as it is something that has kept  me awake at night trying to figure out how to go and get back from places in Gower.

Limeslade. This is where I decided to started my Gower Coastal Walk in 2018. The “First Cymru” buses from Swansea Bus station run every hour along Oystermouth Road. It is a very good service. As a shy teenager I had a terrible fear of speaking to bus drivers. Not anymore. These days, I gabble at them and give them long questions about the right ticket and the correct time.

The bus travels along the seafront road to Mumbles and then snakes its way around the bungalows of Langland. Many cheerful white-haired passengers got on and off the bus with their bus passes. Many of them seemed to know each other and they chatted away to each other and waved at friends out of the window. The sunshine has cheered everyone’s spirits. Finally, at the bottom of Plunch Lane, the sea reappeared and I dismounted.

Here there is a little rocky bay called Limeslade Bay, which is a five minute walk round the corner from Mumbles Pier and Bracelet Bay.

Why is Limeslade called Limeslade? Well, limestone is a big feature of the Gower landscape. From Mumbles to Oxwich, the coast is made entirely of Carbonifeous Limestone that has been faulted and folded. There are many little valleys along the Gower coast called “something-slade” and that’s what “slade” means -in an old English word (“slaed”) meaning a low valley, dingle or an open space between banks or woods. Which might surprise you that a Welsh coastline has so many names of Old English origin rather than Welsh. This reflects that fact that Norman landlords claimed the more fertile southern part of the peninsula and left the wilder, less profitable northern parts to the Welsh.

There are two paths you can take from here. There is the official Coastal path which snakes along above the sea following the many inlets. I have taken this path many times before.

The second one, sneaks up alongside the left hand side of Fortes ice cream parlour, up a steep muddy track onto the Rams Tor. This is the path I took.

It is worth the climb. There is a great view of the lighthouse and the Coastguard station, and if its clear enough, further across Swansea Bay to to Port Talbot and Porthcawl.

This is where the coast feels more like West Wales. The stubby trees and gorse bushes all lean lean to the left thanks to the prevailing westerlies. Once on the headland the walk is quite easy, if not a bit muddy. You pass by a few of the houses that lookout over the sea but as you carry on further along the path, the houses recede, with fields in the way. Quite quickly, Langland Bay comes into view. I love the view of the coast where you can see the bays of Gower off into the distance.

There is a small cove before the main sweep of Langland Bay. This is Rotherhide. Beteen the two bays is Storrs Rock which the French Impressionist painter Alfred Sisley painted in 1897 whilst on staying  at the Osborne Hotel, which overlooked both Langland Bay and Rotherslade Bay, which was also called Lady’s Cove. His stay here must have been very a bitter sweet. He had come come  to marry his partner, so as to legitimize their two children, but both he and his wife were dying of cancer. He painted Storr’s Rock at many times of the day.

Langland Bay is very popular with surfers and day trippers but its unusual for modern day sea-side towns, as it has not been hollowed out by holiday lets. That’s because Langland is an expensive place to live and its tiny lanes are often filled with Mercedes and BMWs. Wales’s first millionaires, the Merthyr iron-masters the Crawshays, set the tone in the mid-19th century when they built their massive summer residence here. It was originally known as Llan-y-Llan and looks as if it was ripped intact from the Scottish Highlands. It was later part of the Langland Bay Hotel but is now called Langland Bay Manor and been converted into swanky apartments that wont leave much change from £300K.

The clean lines of green and white beach huts have become another status symbol. These  striking green and white huts were built in Victorian and Edwardian times. They used to be dolled out to families on a lottery basis, at the very reasonable price of £236 for a three months lease. More recently, however, a cash strapped council decided it would raise money by selling some of the refurnished hut’s leases at a whooping £10,000. You would get to use of your hut for ten years and although the huts can be used every days of the year, you cannot sleep in them in overnight. I don’t know if anyone checks this! None of the huts were in use when I walked past but it was a chilly midweek day in March.

I continued my walk around the bay and again instead of following the official Coastal Path, I climbed up Newton Cliff which is alongside Langland Golf Club to look across Langland Bay.

After the climb up Newton Cliff I was starting to get tired. This is when I made a stupid mistake. I left the beaten track. In stead of following the footpath down the hill to rejoin the official coastal path, with its easy tarmacked surface, I decided to try and follow what I thought was a path along the top of cliff along the edge of the golf course. The sun had gone in and it started to spot with rain. This was a disaster, I ended up struggling down paths covered in brambles sleeping-beauty-style, only to eventually admit defeat and retrace my steps. It was a long detour. I ended up asking directions from some rather bemused looking golfers. I could tell one of them wanted to tell me off for being on the golf course but I was apologising so much, he just said “you shouldn’t really be here” and then directed me back to the official path.

By the time I reached Caswell Bay, I was very tired indeed. I had eaten the single banana I’d brought to eat long ago so I queued for minutes in the very crowded “Surfside Cafe” and bought a chocolate ice-cream which revived my spirits considerably. I then waited at the bus stop for the hourly bus back to Swansea.

What I got right

Next post – Will lots of chocolate biscuits see me through to see the stunning views from Pennard Cliffs?

P.S. Here’s some drone footage of the coast and Langland Bay (BTW The sea isn’t usually this colour)

36 thoughts on “Walking the Gower Coast; Limeslade and Langland Bays”