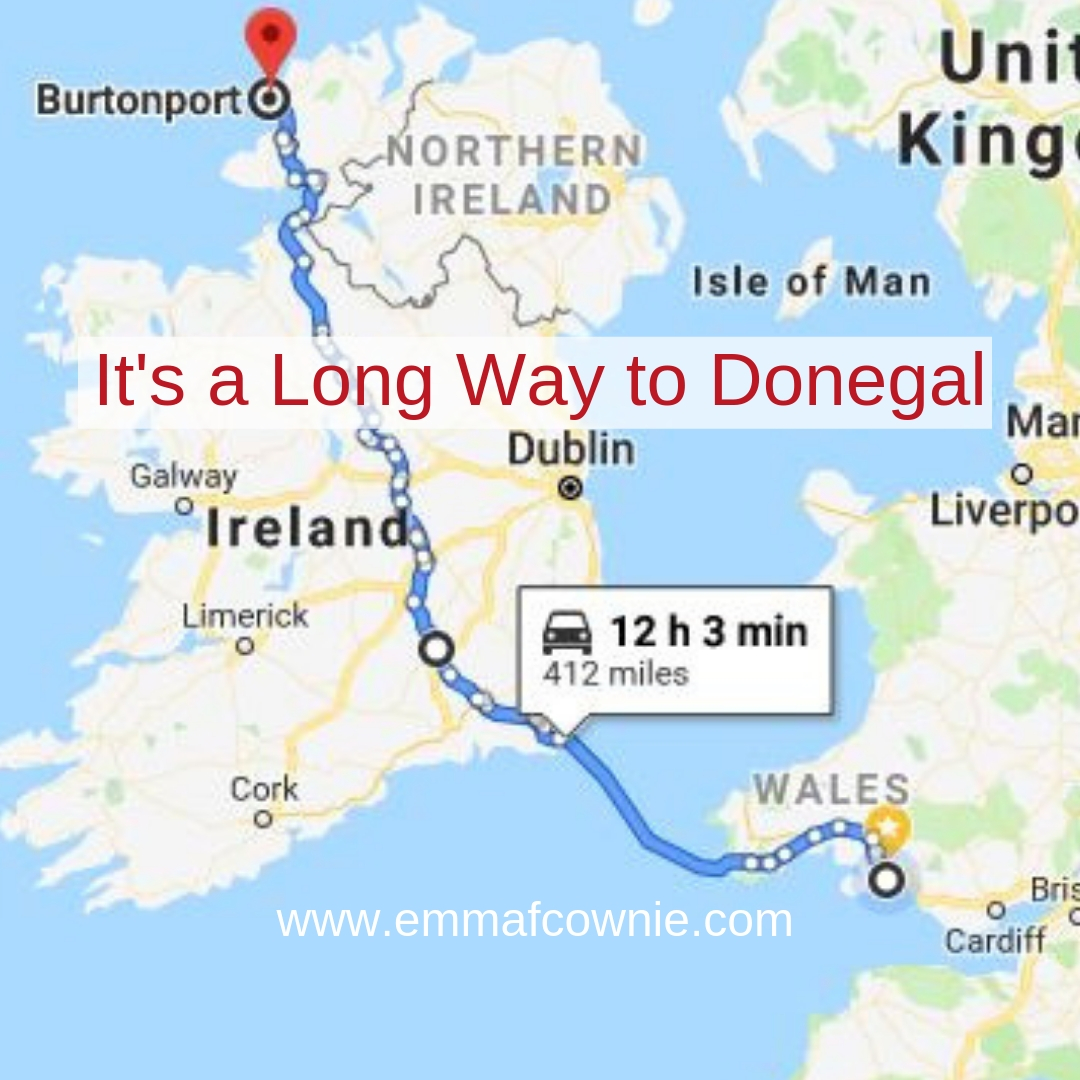 It’s a long way to Donegal. About 400 miles. That includes the bit of sea, St George’s channel, that lies in between West Wales and the Republic of Ireland.

I know Google maps says you can do the journey in 12 hours in 3 minutes but that doesn’t take account factors such as ferry crossing times, day-light and human exhaustion and how slowly I drive.

I avoid motorways. I have a phobia of driving on motorways. It was triggered by a panic attack that occurred at night on the motorway bridge between Neath and Swansea many years ago.

I have had hypnotherapy, read countless books but to no avail. So, my top speed is about 60-miles per hour but I tend to cruise at about 50 (depending on the conditions and the speed limit, of course). I took me a while to get to 60 miles per hour.

I usually only drive locally so it took me a while to feel comfortable driving over 60 miles per hours.

I did all the driving, my husband in the passenger seat, taking care of the dogs and navigating our route to Donegal.

We decided to break the journey up and Seamas had booked four separate B&Bs to stay in en route (with our dogs) to ensure that I could cope with the driving. I have been back in the UK a week, have come down with a cold but it was worth every bit of effort.

Driving through a country is a real education; it is quite different from flying. Where you mostly see the insides of airports, although the flight into Donegal’s tiny airport is absolutely stunning and no wonder they been voted most scenic landing in the world for the last two years running.

Ireland is a big country (I expect those from North America & Australia are scoffing at that statement) but it’s not quick to travel across unless you are flying. Correction, it’s relatively easy to get to Dublin but not so easy to get to Donegal. There is no railway line (they were closed in the 1940s), no motorway and the most direct route cuts through Northern Ireland, which is only a problem as the “A” roads in Fermanagh are small, windy and not as quick to drive along as the “N” routes in the Republic of Ireland.

The Republic of Ireland has changed a lot since I first visited it in the early 1990s. The impression you get driving across the South-Western countries and the Midlands is of a, modern, confident, prosperous and fast growing country.

The rolling landscape of Kilkenny reminded me of Monmouthshire on the Welsh borders with England, the Midland counties are full of farms and the roads, whilst busy, are in no way as hectic as British roads.

Crossing into county Donegal and then approaching Donegal town, I felt real excitement at the sight of dramatic mountains looming in the distance.

It felt like seeing Snowdonia or the Highlands of Scotland.

This was a different part of the world. The road behind me and ahead was almost completely empty. This helped a lot, crossing a massive bridge on the “N” road, as I could slow down without annoying other road-users, thus helping with my anxiety.

Burtonport is an area of Donegal known as the Rosses.

Along the west side lies the Atlantic Ocean, it’s sometimes merciless and raging, at others it is as smooth as a silk sheet and as clear as glass.

The coastline is full of inlets and tiny islands. Inland the landscape is strewn with loughs with massive granite rocks. It’s like no other landscape I have seen. It has more in common with the Highlands of Scotland (they used to be part of the same continent millions of years ago) than anywhere else in Ireland. It feels different from the South too.

The accents here are very different too as they are Ulster accents. Ulster is the name given to northern-most counties of Ireland. There are nine countries in total, six of which, since 1921, lie in Northern Ireland and three, including Donegal, in the Republic of Ireland. This part of Donegal is in the Gaeltacht, which means that Irish spoken here. It means that many of the signs are in Irish. The roads signs are usually bilingual in all of the Republic of Ireland (we have bilingual road signs in Wales too) but here the signs don’t always have the Anglicized name so if you don’t know that “An Clochan Liath” is the Irish for Dungloe or “Ailt An Chorrain” means Burtonport, you may miss the turning! Thankfully my husband is a student of the Irish language and so he could direct me.

What I particularly love about the Rosses is the little rocky inlets, smothered in seaweed at low tide and turquoise sea at high tide.

Lots of houses and cottages dot the landscape, with many islands having a house (or two) perched on top, with little jetties for returning boats.

Each with its idyllic view and solitude.

Yet, if you want company and good chat Donegal is the place to come. As my husband says, having a good chat is the first order of the day. Everything works around that.

Many an in-depth chat was had about the world with people we met. The issue of Brexit and the border-question was on a lot of people’s minds, businessmen were particularly worried by its implications.

My husband, being Irish, was a lot better at chatting at length than me. His record was a two-hour chat with a man he met on a morning walk.

I am going to leave you with one of the first paintings I have finished since returning to Wales. I have had a lot of social media stuff and commissions to catch up on since returning.

I really enjoyed my break and will regale you with thoughts on life with less internet/tv in another post.