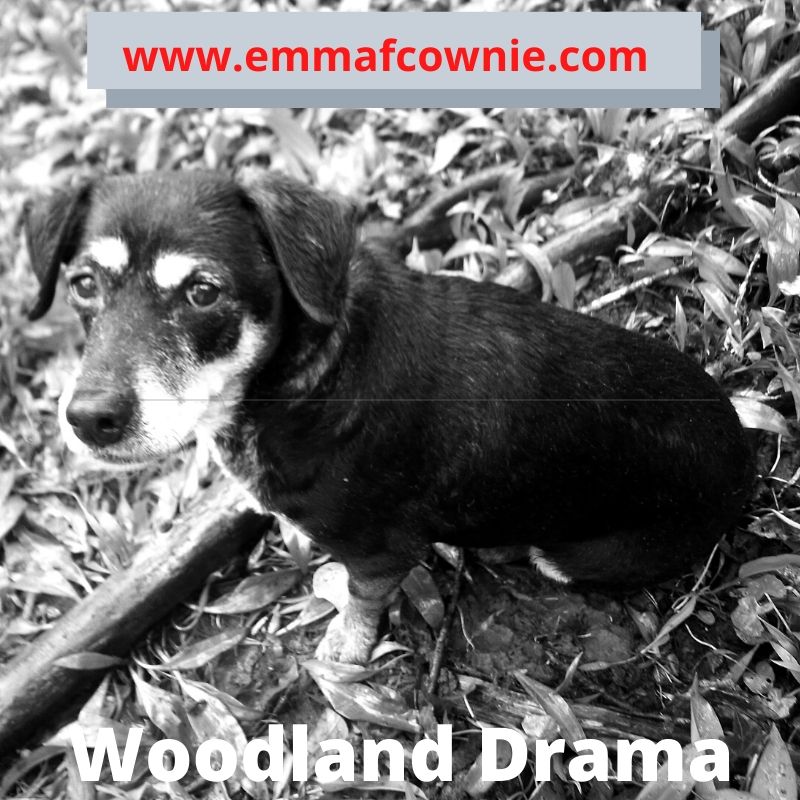 While the rest of the world is on coronavirus lock-down I am confined to my bedroom with my leg in a very heavy plaster. Moving from the bed to a chair involves a lot of hopping and a zimmer/walker frame. It all takes a lot of effort to achieve simple things that I never gave much thought to before.

I broke my left leg. I have broken both lower bones and dislocated my ankle. Six days ago I had an operation to pin the bones in my ankle. My brother asked if breaking a bone is more painful than a toothache. The answer is definitely yes. I have endured 50 shades of different pain since I went for a walk with our dogs 2 weeks ago in my favourite woods, near Ilston, Gower. It was just about the worst time to break my leg, to be honest.

I had walked about half a mile along the side of the stream. I had bought a new camera with me and my attention was caught by the sunlight on a mossy tree. I decided I would move closer to take a photo.  Instead, I stumbled over a muddy stick and as I put my left foot out to steady myself I felt it twist and a sickening snap. I rolled on the wet ground, hoping against hope that I hadn’t done something dreadful but the horrible pain told me that I had. My foot was bent out of shape. Just to think about it makes me feel ill, even now.

As I lay on the ground, I wondered what to do. I tried shouting “Help” a few times but felt silly/useless. What could I do? My husband was in Ireland. Fortunately, I had my mobile phone in my handbag and it was charged with credit so I rang for an ambulance and waited, and waited. The call handler told me not to move. It was cold on the wet mud. I took a photo of my bent leg. I have not looked at it since. I don’t think I can bear to.

I assumed that the ambulance would not be too long (I was very wrong on this score) and I started to worry about my two dogs, what would happen to them?  I rang my neighbours Rob and Liz and told them what had happened and where I was. Rob said he would come for the dogs. So I waited. I lay and looked up at the sky. Blue patches and white clouds drifted by. It started to rain. Then the sun came out again. I was still lying on the ground. I don’t remember what my dogs were doing but they were nearby. I think Biddy, the collie-cross, tried to present me with a few sticks to throw for her. I clutched my injured leg, it really hurt. I rang my husband. It went to voicemail. “I am lying in Ilston Woods, I think I have broken my leg. I have rung for an ambulance. I have spoken to Liz and Rob. Rob’s coming for the dogs….” I felt bad about leaving him a message when there was nothing he could do.

After a long time, a family appeared on the track, a couple with their two girls. “Help, I think I have broken my leg”. I think they were surprised by this as they walked towards me very slowly. I told them that I had called for an ambulance and my neighbour was coming. They took my phone number and said they would go down to the road and look out for Rob and/or the ambulance.  So they left me and I waited and waited. Company had distracted me from the pain in my leg and being on my own meant being with the pain. I rang my husband again and then Biddy started barking. It was Rob. Thank God.

“How long have you been lying there?”

“45 minutes. The Call handler said to stay where I was”

“That’s stupid advice. She can’t see your situation. You will get hypothermia. We need to get you up”  So with great difficulty, Rob helped me up off the wet mud and I hopped in slow agony to a mossy tree, where I first leaned against a trunk and later sat on a low branch. He had brought a heavy hi-vis coat which he put around my shoulders. It was blissfully warm.

I wish I could say that was the end of it. That the ambulance came soon after but they didn’t. We waited and waited and rang the ambulance again. It was difficult explaining where I was to call handlers who were not local. They wanted to know the name of the church at Ilston. Ilston is the tiniest of Gower villages. There are about 10 houses. There is only one church. What did it matter what saint it was dedicated to?

So after another long wait, I asked Rob to walk down to the house opposite the church at Ilston to ask them to ring the ambulance, perhaps they would be able to give better directions. We had often passed the people who live here, they waved in a friendly manner and I was hopeful that they would help. Rob left with my two dogs, Biddy and Mitzy, in tow.  I sat and waited. The pain was worse when I did not have any company to distract me. I looked at the mud by my feet. I was dimly aware of a robin on a branch a few feet away from me. And then like a miracle, little Mitzy appeared by my side. She was collarless. I was so glad to see her. She was not leaving me. Good loyal rescue dog to the rescue. I took her photo as a distraction from the pain.

Rob returned with David (and Biddy on her lead). David is 73 and lives in the house opposite the church. He made several trips along the track, and brought me many very welcome items like a big blanket, gloves, hat and a hot water bottle. I was really thirsty and he also bought a bottle of water but David’s wife had said I could not drink anything, her advice turned out to be right, so I just washed my mouth out with it. He made several trips. The last one in the dark with a torch. He took quite a risk, helping us in the dark. We got excited because the beam of his light reflected in the stream and it looked like two people were coming along the track, but it was just him. It got very dark, The moon came out and a barn owl hooted. We told him to go home, we were worried about him in the cold night air. He reluctantly set off.

I started to think that no one was ever going to come. I was so cold. It would be difficult enough to get me out of here in daylight but in the dark? I kept thinking up with ideas for getting how to get me back to the road; What about a horse? A wheelbarrow? One by one my desperate ideas were politely considered and sensibly dismissed. Rob was a reassuring presence. They will come he said.  Then eventually, Rob said, says, “I think I can see lights along the track, more than one!”

At long last, the ambulance service had come. After 5 hours of waiting.  Two figures dressed in green, a woman and a man, carrying torches were coming along the path, with David and his brother-in-law leading the way. I was so relieved. Once they were there, I knew they could sort everything out. And they did. Lyndsey the paramedic was lovely and reassuring. She worked under very difficult circumstances. It was dark and very cold. She checked my blood pressure, temperature and although I felt so cold my body temperature was normal (hurray for thermal vests, I say). I was given a small dose of morphine which had me seeing stars and then liquid paracetamol. They called Sketty Fire Brigade to put me on a stretcher to carry me half a mile down the track (and over the church fence) to the waiting ambulance. It was a long journey looking up at the cold frosty stars through the tree branches from that stretcher. It was a full moon. They carried me wordlessly. There was a short snort of laughter when I said “Well Done” after they had hoisted me over the churchyard railing.

It was a very long night. The journey to Morriston Hospital Hospital seemed slow. Where are we now? I would ask. It was the pain that made it feel that way. We waited outside A&E in the ambulance for quite a while. Lyndsey told me her mother was the first baby born in the NHS and called was Aneira, after the Welsh founder of the NHS Aneurin Bevan. Eventually, I was taken in for my first X-ray. I was visited by a number of doctors who introduced themselves to me by their first names;  Jeremy, Mohammed, Chris there were others but I have forgotten them. After a wait, the doctors in A&E manipulated my leg (I was under light anesthetic) and put it in plaster so that the agonizing swelling could start to go down. The leg was X-rayed again. Everything was aligned nicely. Every now and then the average waiting time in A&E was announced on the loudspeaker. It started at 8 hours, later it was 13 hours and then by lunchtime the next day it was down to 2 hours. I lost track of time. I didn’t get much sleep in A&E. It was a fascinating place, very hectic. No wonder there are so many drama series set in Emergency Rooms & Casualty Departments.

Anyway, to cut a very story short I waited a day for a bed in the trauma ward. I then spent another 7 days waiting for the swelling to go down so the ankle could be pinned. I was “nil by mouth” for 4 days in a row but never made it to the operating theatre. Thankfully, on Monday I did, finally. It was probably just as well as the ankle specialist was working that day. The coronavirus emergency meant that the ward was rapidly cleared, as they needed the beds and staff elsewhere. I was sent home on Tuesday via Red Cross Ambulance.

Postscript:- Biddy and Mitzy went home with Rob and slept all the next day. Seamas flew back from Ireland on a plane full of racegoers heading for the Cheltenham Races.

56 thoughts on “Woodland drama (or how I broke my leg)”