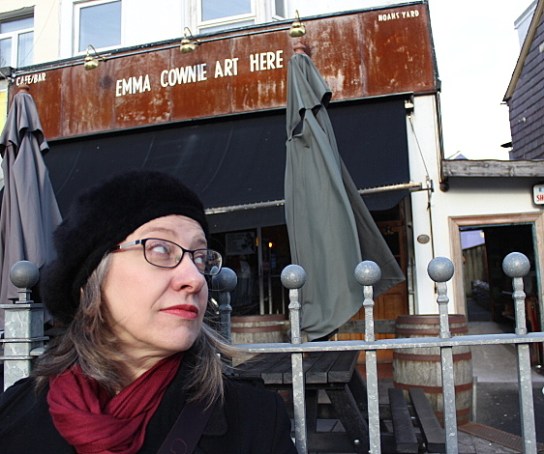 I recently came across this article in The Atlantic which really interested me as it was sort of explaining some of the strategies my husband and I have been using in the last few years to promote ourselves as artists. I have often thought of my husband,  Seamas, as a creative director so was very interested by the term they use in this article, Creative Entrepreneur.

To give the reader some background, I had a car crash which led to PTSD and left me at my wit’s end, worried about my future, whether I could return to my job as a teacher and then returning to painting in order to help me cope with the emotional and psychological effects of my PTSD and simply just get through the day. Seamas encouraged me to paint as he knew it was helping me therapeutically. He then noticed my style was changing post PTSD and made encouraging remarks about certain areas to explore. I started building up quite a number of paintings as I painted everyday, all day, and would sometimes have 3-5 paintings per week. Seamas suggested trying to sell some of them via these online galleries he had come across on the internet.

We tried in hope rather than expectation to be honest. We were not sure if anyone would like them or if we were wasting our time. Fortunately we started selling paintings and giclee prints right from the start which was a merciful relief. However, we were still a relatively unknown “commodity”, I had not been to Art College, I did not have a following or a supportive network of artists to call on for support or attendance at exhibitions etc. We had to introduce ourselves to a local and an online community from “out of nowhere”? I was not attached to any Gallery as well, although had featured in a number in the South Wales area.

My husband was left with the dilemma of trying to promote an artist in a way that explained who she was, her work and her inspirations, where she was coming from artistically and so on. How could we connect with many in a short time how could be introduce ourselves and let others into our creative world and somehow be part of the process? Seamas had often talked about the power of telling personal stories, sharing experiences in order to connect with like minded minds.

First he got as many followers as possible on social media, twitter and facebook mainly. Secondly he set up a website on ArtWeb which is linked to over 20,000 other artist’s websites. He started this blog for me to write about my work. We started telling my and then our story. We let others into the creative process. That is how we got to know each other.

We then started blogging, we started writing about the work, the PTSD, our inspirations, we wrote long descriptions about the work to accompany work added to online galleries e.g. Artfinder,  blogged about “Me At Work” we made short videos e.g. about building a gallery in the back garden, all informing artlovers and collectors of the experience we had making or rather “producing” the art, as well as our influences, inspirations, in an effort to make them feel part of this process, this artist’s journey. It may have also helped sell some work we believe although if is difficult to say for definite, to correlate so to speak.

We believe the more an artist can take the artlover on the journey or the more you can share the story around the work, the more they will feel involved with the final work, in short it will mean more to them. They will have invested more, emotionally, into the work. They know more and appreciate more about the work. If they buy the work they often have already started a dialogue, a conversation about the work.

When we meet people at galleries I have exhibited in, people would often have very knowledgeable conversations with us about certain works, where they were painted, how they were familiar with this area, how the work resonated with them because of not only the depiction of this area but in the shared appreciation of this area. We shared a, or bonded over, a love of the area as well as how the painting interpreted this area.

The paintings were becoming more than the paintings. They already had added meaning. The text and words around the paintings provided a neutral space whereby we could meet others and discuss the work and it’s inspirations. The painting was not just our painting anymore. it was more than that. It “belonged” to others out there on the internet, in galleries, it belonged to the collector who had now hung it on their  wall, it belonged to the online gallery who had featured it and loved it because it was one of their favourites.

There was a life for a work beyond the actual painting. In fact there was life for the painting before painting. In the scouting for good locations, the photo shoot, the preparing of suitable images to paint.  All prior to birth.

So from the onset, we have been aware that talking about art, about paintings, the areas that inspired them, the artists that inspired us, what we were trying to communicate all seems to add value to the work. It allows others to be part of. We are of the view that it also helps sell the painting. In the art world the use of words and text is well known and established, especially in conceptual works, where sometimes words are the actual artistic materials just as oil can be for oil painters.

So we have always liked to join words to the final image, the final painting. Words allow one to celebrate the painting, to add to, to enhance, to embellish. If one can write half decent prose to a rural landscape, for example, it deepens the experience we believe. Anyway that is how Seamas and I have been proceeding for the last four years.

Sometimes I had to be convinced but Seamas always had this intuitive sense that this value added creativity counted for something, especially in terms of sales. So back to the article. We think The Atlantic article is  very pertinent in explaining this new role of having to be creative not only in crating art but in marketing and selling it. In their explanation of Art now involving the need to include those “online” in the process of and experience of creating this art and in the final appreciation of it. We add that it was mainly the Artfinder website that allowed this entrepreneurial creativity to work as it is a quite geeky website that allows greater interaction with those who may love or wish to buy your work. Online galleries have also led to the “democratization of taste” moving art from a sometimes elitist curator-led model to a more meritocratic one, perhaps?  Although it seems difficult to be purely non-curator.

“The democratization of taste, abetted by the Web, coincides with the democratization of creativity. The makers have the means to sell, but everybody has the means to make. And everybody’s using them. Everybody seems to fancy himself a writer, a musician, a visual artist. Apple figured this out a long time ago: that the best way to sell us its expensive tools is to convince us that we all have something unique and urgent to express. “Producerism,” we can call this, by analogy with consumerism… And the democratization of taste ensures that no one has the right (or inclination) to tell us when our work is bad…we’re all swapping A-minuses all the time, or, in the language of Facebook, “likes.” It is often said today that the most-successful businesses are those that create experiences rather than products, or create experiences (environments, relationships) around their products.

So we might also say that under producerism, in the age of creative entrepreneurship, producing becomes an experience, even the experience. It becomes a lifestyle, something that is packaged as an experience—and an experience, what’s more, after the contemporary fashion: networked, curated, publicized, fetishized, tweeted, catered, and anything but solitary, anything but private. Among the most notable things about those Web sites that creators now all feel compelled to have is that they tend to present not only the work, not only the creator (which is interesting enough as a cultural fact), but also the creator’s life or lifestyle or process. The customer is being sold, or at least sold on or sold through, a vicarious experience of production.”

It seems that we have caught the zeitgeist in some way over the last few years. We were unaware that others were articulating this, until this article. Today we need to see and read more about the “producer” of the work and often where it is “produced”. When we share photos of me or where I work, they get many more “likes” than the actual works. When we post a painting on facebook we have often observed that the painting when reposted as sold often gets more “likes” than before. People seem to like and applaud success and success stories. They like to be engaged in or part of that story and if an artist has a following over a number of years and those followers have (mostly)  been happy to share the ride to success, then there have been a number of years of followers had emotionally  invested also in the artists journey like “emotional shareholders”.

The art is not alone or isolated, it has been reared in a online community where often others, mainly strangers care for it. How do they care for it? By supporting, commenting, sharing kind words and words of encouragement, by talking about the work to others, by buying work, by retweeting, sharing and so on. They are active parts of the team. The producers thus are not just the artist but the followers as they are part of the production team. They also encourage certain works, in certain areas, and can discourage others, in certain areas. They keep you going when times are lean, in terms of sales and confidence.

Artists do not need to be starving artists in the garret. They can be successful be engaging this burgeoning online family. Many are eager and happy to help promote work if they love the work and in the realisation it is so tough to make a living as an artist.  Artists and those who love art are some of the most supportive people as they realise the heavy odds stacked against the artist. Work often sells through the promotional efforts of this community of supporters and followers. The more an artist shares with them, the more opportunity they get to engage and emotionally invest. They can not only help motivate the overall production, but also of specific types of work (who doesn’t take heed of “likes”?) in a strangely democratic, mass curating. The market also talks back and artist may profit from listening to the advice given.

The artist has moved from one of isolation to embracing a community of like minded others.  It is relationships that partly determines success. It is in engaging the populace not just the elite.

7 thoughts on “Art as “Shared Experience””