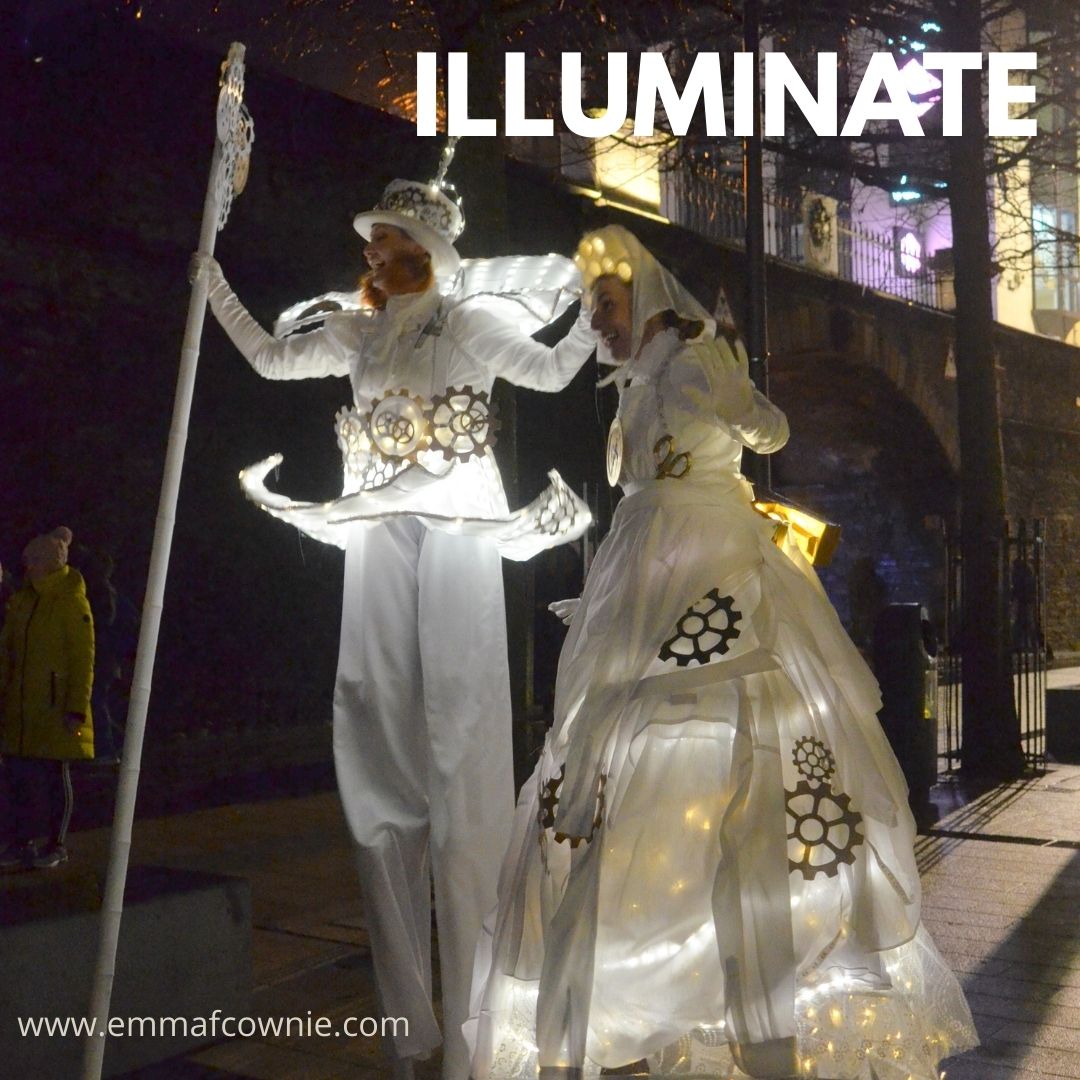 We have now moved to our permanent home in Derry. We will return to Donegal when it is warmer.

The winter weather wasn’t the problem as such, as I enjoyed the storms and changeable skies. It was living in a draughty cottage without central heating, just storage heaters and a wood burning stove.  We were living on biscuits to keep us warm! The cats and dog just LOVE the radiators in our house in Derry. So do we.

We also love exploring the Historical City of Derry.

The ‘Illuminate’ festival is running over two weekends in Derry, 17th – 20th and 24th – 27th February, from 6pm – 9pm. We visited it on Thursday night. It was very cold (double socks and thermals weather) but mostly dry. This was important was all the sites we visited were out of doors.

We followed a “magical illuminated trail” which told the story of the city. At each of the locations were live projection shows, cast upon the wall and facades of the ancient buildings. They were accompanied by soundtracks, music, singing and narration. They were very affecting at times.  It might have helped if we had taken the map below with us because we started at the Guildhall, which I think is towards the end of the series of six sites. It didn’t matter too much, as we looped around and visited it a second time. We also missed a couple of sites and will have to go back to see them.

The route along the 400-year old city walls is about 1.5km long but can be walked at a leisurely pace, and there is plenty of time between each light show.  These were a mix of audio-visual, digital media and outdoor projections. On Thursday night there were lots of families with small children  with prams (although many toddlers ended up  riding piggy-back style on dads’ shoulders)  and dogs on leads.

Here’s a flavour of one of the Projection shows – in two parts.  Seamas filmed it and wouldlike me to explain the wobbly camera work at the beginning is because Biddy our dog was pulling on the lead. The barking along to Amazing Grace in the second clip, also thanks to Biddy! I had to take her on a quick walk at this point.

There are also a numbers of intimiate music gigs (read more here) and street performers. I never thought I would have been so pleased to see fire jugglers as on a cold February night in Derry!

All in all, it was a brillant introduction to Derry, its History, people and its creativity. We thoroughly enjoyed the experience and even better, its running next weekend too so we can do it all over again. Oh, and I forgot to mention. The Live Projection shows and The Sound and Light Trail are free too.