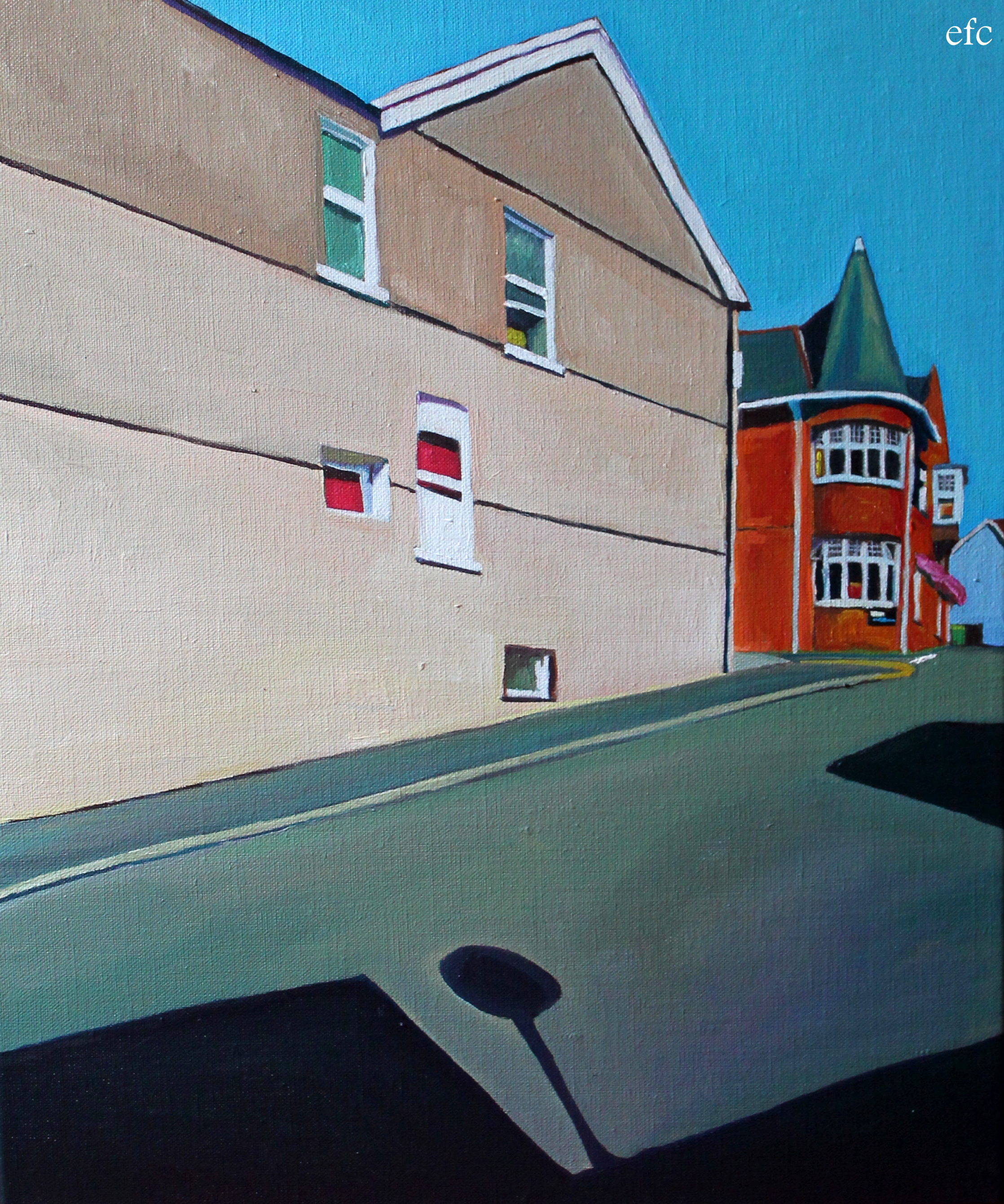 The schools have gone back. Unusually its raining. When I was teaching, the first weeks of term usually would enjoy an Indian Summer. It made the pain of returning to work after  the long break a little easier.  Not this year. The students are returning. Term does not start for another month but quite a few students have been here over the summer.

The roads are starting to fill up with cars. The empty kerbs are vanishing. The stretch of road in this painting is often packed with cars on both sides. The local bus struggles round this bend and down the hill towards the viewer. The shadow to the far right is that of a rather tatty old coach house which has suddenly been converted into student accommodation over the summer. The Rhyddings pub is perched at the top of the hill.

In term time at the start and end of each school day a “lollypop lady” ushers the junior school children and their families across this stretch of road. She does her job well. She gives motorists a very fierce look as she steps out into the road with her stop sign. She says hello to all the children as they cross. I have not seen her for weeks. Today must be her first day back at work too.

It all looks so peaceful but recent events in North Korea remind me not to take peace for granted. During the Second World War, air raids killed several Brynmill people and damaged homes in the area. In September 1940, Brynmill had a lucky escape. A single plane dropped 3 High Explosive bombs over Brynmill just before 9.00pm. One failed to explode and there was slight damage to Langland Terrace but no casualties.

In the following year, in February 1941 was what is commonly referred to as ‘The Three Nights’ Blitz’ took place. It  lasted for nearly 14 hours, killed 230 people, injured another 397, wiped out entire streets of residential houses, made 7,000 people homeless and left the town centre of Swansea a terrifying inferno of total destruction. Some bombs fell on Brynmill too. The glow of the fires could be seen as far as Devon, and the west part of Wales in Pembrokeshire. My grandfather, who lived in Cardiff with my grandmother and mother, came to Swansea to help with the aftermath. Surprisingly, some of Swansea’s oldest buildings, the Castle, Swansea Museum, the Glynn Vivian Art Gallery survived but the town’s commercial heart was razed, with the Ben Evans store, which seemed to have supplied everyone with everything for upward of fifty years, was flattened.

I think that Swansea people think that the blitz only affected the town centre and the docks. The last raid on Swansea was two years later on the sixteenth of February nineteen forty-three. The Germans called the raid “Operation Wasservogal”. It started at nine-thirty in the evening and the target was the docks.  A German bomber, possibly getting rid of its last bombs before it returned to Europe, dropped a bomb that fell on 24 Park Place and killed Elizabeth Fabian and Selina Mogridge outright. Selina’s 24-year old daughter, Hilda, later died of her injuries at Cefn Coed Hospital, just under 2 miles away in Cockett.

Thankfully, the Luftwaffe never came again. Later in the war, in spring of 1944 1,566 American troops were stationed in hundreds of tents at Camp X3 in Singleton Park in preparation for the D-Day landings. The officers, apparently, were stationed in Mumbles. The Americans were using Gower’s sandy beaches backed by cliffs to train for the D-Day landings on similar terrain in Normandy. Jim Owens has collected many stories about the GIs in Swansea in 1944. The local kids clearly thought they were both glamorous and generous.

If I remember rightly, there used to be photos of Prime Minister Winston Churchill visiting Swansea after the blitz in the Rhyddings pub.