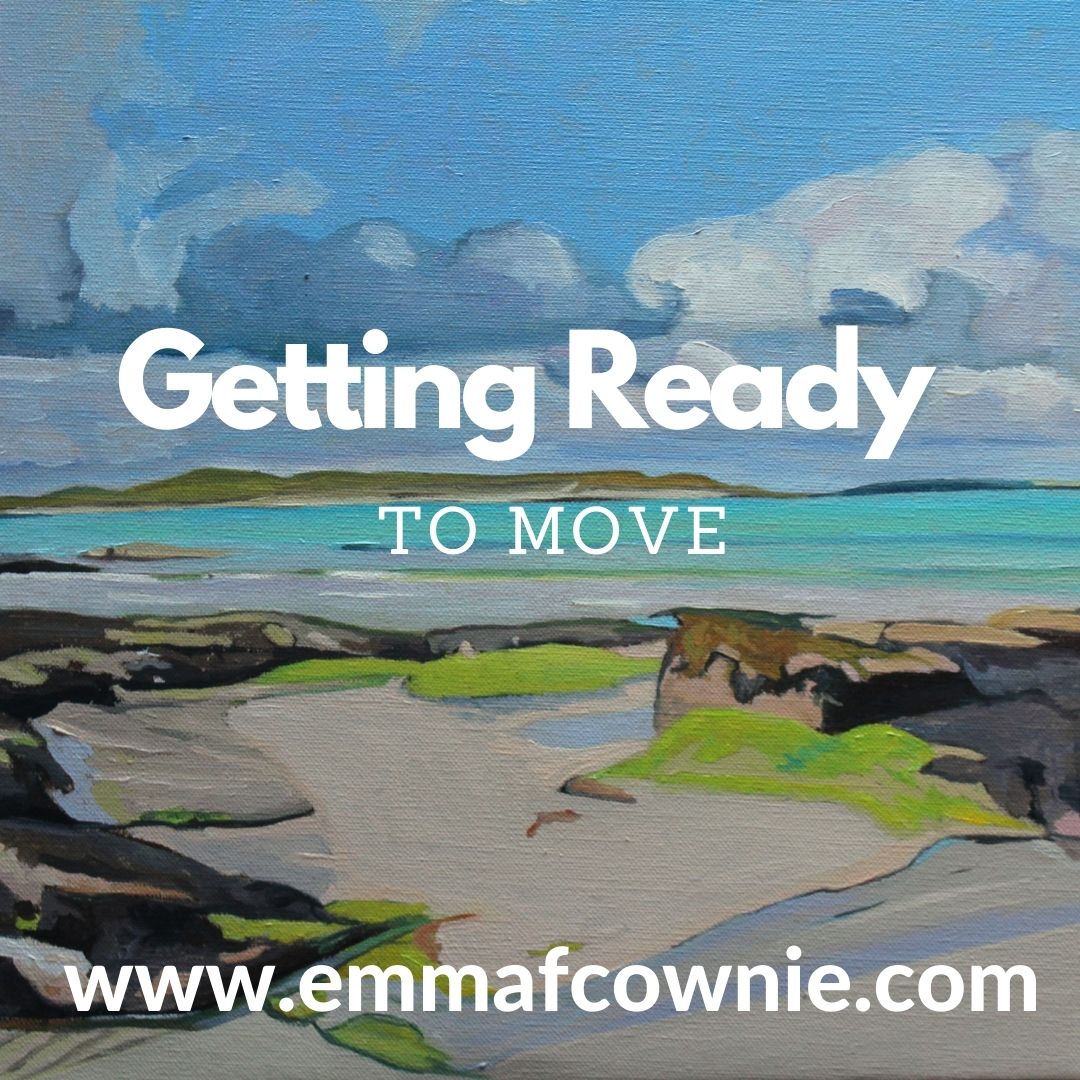 I like this painting. I  find it very calming. I especially like the clouds. I also like the emptiness of the beach. That is something I aspire to in my home.

This painting is actually wraped in bubblewrap in in the upstairs hallway. It had been hanging in our bedroom with three others for a couple of weeks. They had been refugees. They were evacuated from my attic studio because I had needed to paint the ceiling.  I have since painted the bedroom wall. I still have the floor to finish.

All of my other paintings are wrapped in bubblewrap and stored elsewhere.  We are in the midsts of packing up and redecorating the house to put it on the market and move to Ireland. It is a mammoth task. The more we do the more it seems to grow.  We are at the wall-papering-and-painting-floors stage. I say “we” but  I should say “he”. My husband, Séamas, has done 98%  of it.  He has spent months and months working at it. I have been putting stuff in boxes and labelling them. I have only recently started helping with the decorating. It is exhausting. I wake up every morning and think, “I am so tired”. It has taken me weeks but I am 80% there. Unfortuantely, I feel like I have been 80% there for several weeks now. I once read somewhere that you should start packing a month before you intend to move. I have been doing this for at least three!

I initially spent months trying to pretend it was not happening because I found the thought of it too stressful. I am not alone, many people (only 40% amazingly)  say that moving house is more stressful than going through a divorce and most people (60%)  say they are put off moving because of the change involved. That’s me.

I have been getting rid of stuff for well over a year and a half now. I started with selling my surf boards on ebay then my old academic books on Amazon, but the pandemic put a stop to that. I have been getting rid of other stuff lately; clothes, china, novels, picture frames. I have found it utterly exhausting and it provokes all sorts of emotions, not all of them pleasant. There is a wierd sort of grieving in throwing things out.

A visit to the Council Dump (sorry, Recycling Centre) is one of my favourite things to do. It takes so much emotional and physical energy to get stuff there, it’s a joy to come home without it. There has been the occasional jumper or pair of shoes that I decided to keep or put on ebay rather than send to a charity shop, but mostly it’s gone. I cant believe how much stuff I still have. It’s like a bottomless pit. Everytime I think I am getting there I open another cupboard or wardrobe and find more! Our house certainly has a lot of storage space.

This process has been like shedding many “skins” that I inhabited in the past.  One skin has been the academic books from when I was a lecturer and researcher in Medieval History. Another were the “tidy” clothes and lots of History books and DVDs, from when I was a school teacher.  I threw out a lot of running gear. I have accepted that after breaking my leg so badly that I will never pound the streets for exercise again. So the boots and shoes with anything but the flatest of heels went for the same reason.  I also finally admitted to myself that I will never go back into the classroom as a teacher. It has been 4 years now. Who am I kidding? I didn’t renew my teacher’s licence this year. What a relief. Come to think of it, I don’t think I was sent a renewal notice. Never mind. It amounts to the same thing.

This has made me see how we gather “stuff” around us. I think I do it to give myself a sense of security and identity.  Maybe this is because I moved house a lot as a child. I lived in 5 houses in three different parts of the country and went to 7 different schools before I was aged 11.  Apparently,  moving house when you are a child isn’t terribly good for you. Setting off for university, my father had to tell me to decant part of my record collection because there just wasn’t enough space in his car for my stuff and us! He had to bring it all back at the end of term too! As an adult I have lived in three different cities; Cardiff, London and Swansea. We have been in Swansea for 21 years. I have gathered a lot of “moss” that time. Séamas has also gathered a fair bit of DIY stuff,  those sealing guns in particular (see illustration).

I don’t know where I get my hoarding from. Not my mother that’s for sure. She has been doing her version of Swedish Death Cleaning for years. “Welsh Death Cleaning”, you could call it. It is a sort of a minimalism for older people. She very disciplined about clearing stuff out so that she can either a) move smaller one day or b) so we don’t have to do this when she is no longer with us.  No object or piece of clothing stays in my parents home for very long if a) it is no longer worn on a regular basis b) regularly used or c) very decorative. Otherwise, off it goes to the local charity shop. Many years ago, when my sister moved to London “temporarily” to do an MA at the Royal College of Art, she left her old Morris Minor car at my parent’s house . After a few years, when it was it clear that she wasn’t moving back home, my mother sold the car. She gave the money to my sister.  Jane is still a bit mifted about it. If you left to her it would still be in the drive! I guess all that moving house over the years taught my mother discipline.

When we bought this house over 20 years ago, I declared I was never going to move house again. My mother said that’s what women say after giving birth, but most of them go on to have more children! Yes, life has a way of making you eat your words. Here I am preparing to move house.

My tendancy to gather of stuff accelerated after I had my breakdown. I once tried to do the Marie Kondo thing (in fact I found a few rolled up in my airing cupboard Maire Kondo-style) but I got overwhelmed. I couldn’t keep it up. I lacked the energy to do anything much, let alone decide what to chuck out and then do it. It is a form of hoarding.  Yes, it’s an ugly word.  I am not as bad as those poor souls they make TV programmes on Channel 5 about, yet. I am still somewhere on that unpleasant spectrum. It’s a sort of compulsion. I can’t let go. Breaking my leg, didn’t help either. When everyone else was decluttering in the early days of the first lockdown, I was confined to the bedroom! Then, when I was ready to get rid of stuff, all the non-essential charity shops were shut! For months.

The strange thing is that once I have cleared space, I can see and appreciate what I have choosen to keep better. I now look at stuff and think, do I really need that? I go back to the packed boxes and take things out; thinking: why did I pack that? It’s like the ebb and flow of the sea. I clear out stuff, feel some satisfaction and then I find more stuff and have to go through the process all over again.  The other side of the coin is that twice yesterday, I went to find something, only to realised that I had chucked it out!

I need to be tougher and get rid of more stuff. I follow “Be more with Less” decluttering account on Instagram in the hope that some of the inspirational quotes will sink in. I know I have a long, long way to go.  The only “skin” I want now is that of an artist and blogger. I don’t kid myself that I won’t buy more stuff in the future, but I hope I will be better at shedding it more regularly. I will be following my mother’s example! She’ll laugh at that!

Here’s another of my recent paintings, it was also hanging in the bedroom.