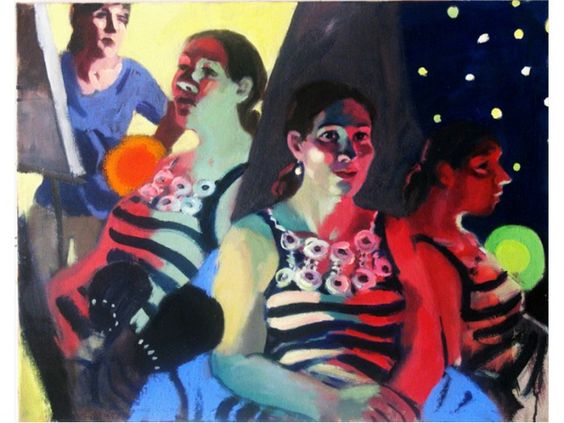 I am only including living artists in this list (my husband, pointed out that I had missed Gwen John). These are based on suggestions made to me and a few more that I have discovered on Pinterest. I have enjoyed looking up female artists and found it quite inspirational. Many of these artist work on large-scale pieces and I often lack the confidence (never mind the space) to tackle large works. Certainly, it seems that quite ordinary work can become exciting when it is over a metre in size! I was also interested in the artists who used their work as social commentary, especially the Americans. What makes female artists different from male artists? Is it a lightness of touch? Subject matter. Gone are the day when female artists contented themselves with paintings of flowers and families.

Betty comes from a family group and community which has produced some of the most famous and influential Aboriginal artists. She is the daughter of famous artist Minnie Pwerle.

Jenny Sages She was a freelance writer and illustrator for Vogue Australia until the 1980s before starting full-time painting in 1985 at the age of 52.

Nalda Searles, works in fibre textiles and her has a strong connection to the Australian landscape.

Wendy Sharpe, is amazing. Her atmospheric paintings have such energy. They love her in Australia too as she one of Australia’s most awarded artists. She has been a finalist in The Sulman Prize twelve times, and The Archibald Prize six times. She has held over 59 solo exhibitions around Australia and internationally.

Bev Lee, usually works in pastel. Her portraits have a wonderful lightness about them.

Amy Sherald is based in Baltimore (where “The Wire” was set). Her work started out autobiographical in nature, but has taken on a social context ever since she moved to Baltimore.

Anna Valdez, originally trained as an archaeologist, and her still life paintings, especially the very large ones, are bursting with colour.

Her work explores her personal journey of having been born in Nigeria then moving and assimilating into American culture in conservative Alabama.

My final list will be of deceased female artists and it will include all the suggestions that have been made to me via this blog (as well as a few of my own).