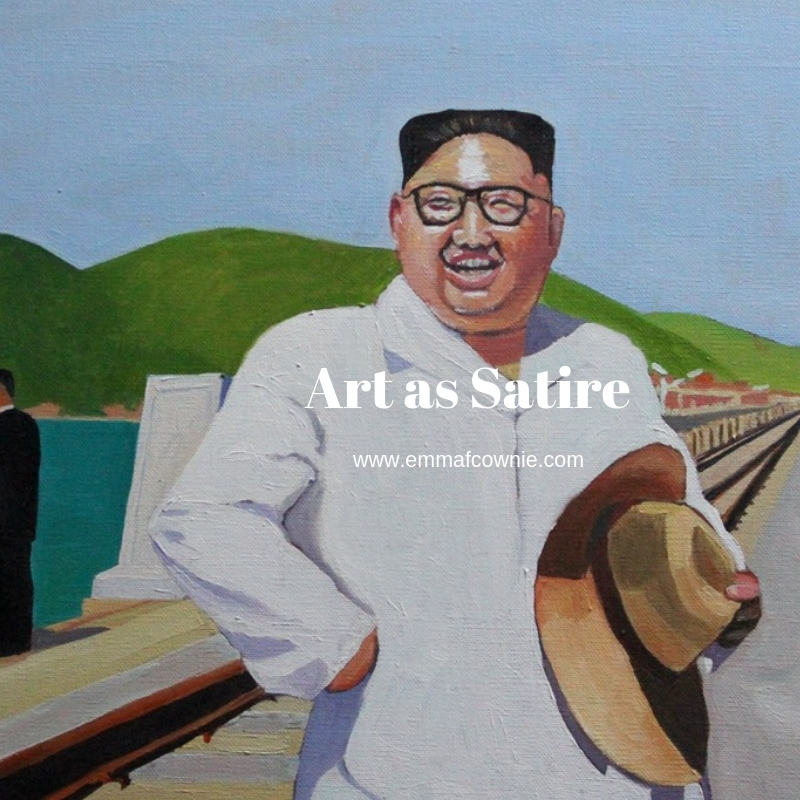 I paint commissions. Most commissions requests are pretty standard, say a beloved dog, a favourite landscape or the owner’s house. Some commissions, however, are different. I recently painted two commissions that quite different from the typical paintings of animals/landscapes. My client sent me two images, both were photographs cut out of the New York Times, with little or no explanation. They were both clearly political in nature. I was given free rein to interpret them as I liked.
I find these commission interesting as these are not my usual subject matter. I *usually* paint landscapes or observational people portraits. However, in painting these images I am forced to look at them carefully and consider the wider implications of what I am observing. I don’t research the image beforehand only afterwards, I just observe.
The first image I painted was of an internment camp. So with “Suffer the Children”, the tents reminded me of  the 1970s medical comedy/satire M*A*S*H which was set during the Korean War. In its early years, M*A*S*H was clearly a commentary on the Vietnam War but later on the Cold War in general. It often questioned, mocked, and grappled with America’s role in the Cold War. It was funny and thought provoking.
I knew that the figures lined up in my source photograph were minors. Teenage boys, I guessed from their size. I didn’t know where they were, but I guessed that they were somewhere in the USA near the Mexican border.
It eventually dawned on me that the white squares on their colourful T-shirts were actually I.D. tags, a bit like those luggage labels evacuees wore during Britain in the Second World War. Turns out that these were teenage boys who had entered the USA illegally. This is, in fact, is a secret internment camp at Tornillo, outside El Paso, Texas. I call it secret because no reporters have been allowed to visit although the New York Times wrote an onion piece on its existence. The photos were presumably taken with a drone.
When I painted this image and shared it on social media there were the usual “likes” but little commentary. Few comments. No one said how terrible it was that children were held indefinitely in these camps, in the “free” west. Or that similar “immigration removal centres“ also exist in the UK, where people, men women and children, are locked up without time limit. Perhaps, they think “immigrants” and then lose interest. Perhaps people missed the satire of the title “Suffer the Children”?
I drew a very different reaction with the second commission. This was a photograph of North Korean leader Kim Jong Un standing on a bridge. I know plenty about the North Korean leader and I think that North Korea must be a dreadful place for its citizens to live in, as they are lied to, starved and any disent is swiftly punished with time in work camps. Also know that that we in the west are told a lot of nonsense about the Korean, such as North Koreans only being allowed a choice of 15 “official“ hair cuts. It all needs to be taken with a pinch-of-salt.
I initially thought this image had been photoshopped. The two figures either side of Kim didn’t look real. In fact they sort of reminded me of a Pink Floyd Album cover, “Wish you were Here”. If you are not familiar with it , it shows of two men in suits shaking hands. One of the men is one fire.  As the image was made in 1975, those are real flames. Not photoshopped. Which makes the image especially mesmerising.
As I looked athe Kim Jong Un, photograph I realised that two suited men were his security detail. The image was as “real” as the Pink Floyd one, but also just as staged. All photography and images of Kim have to be officially sanctioned. North Koreans can’t draw or paint him unless they are official state artists.
This photograph, then is how Kim wants to be seen. As a relaxed and smiling leader on a modern railway bridge. There are no ordinary North Koreans in sight on the train platform in the distance. If I was a North Korean citizen, the act of making this painting, however, may lead to me and my family spending time in a prison camp, Hence the title “Wish You Were Here” (no question mark) is ironic.
Turns out that this was a new railway bridge in Gwangwon Province and photograph was taken less than a day after Donald Trump called off his planned meeting with Kim. North Korea had said that Kim was still willing to meet Trump “at any time”, so the title is doubly appropriate.

Wish You Were Here

When I posted this image on facebook and twitter, hashtagging it #statire, it was met with a storm of outraged comments from people who assumed that it was some sort of endorsement of the North Korean state. I was bemused. I wasn’t expecting this sort of reaction. Is it really very likely that a western artist would paint a fan portrait of a dictator?
There were many outraged comments on how Kim Jong Un killed people in work camps and was an evil man. These came mostly from American and Asian commentators. Interesting, in the light of the fact that Trump’s government imprisons children indefinitely and China also detains muslim uighur people in Xinjiang province. I could go on. Hypocrisy is rife. It’s also interesting, it was only British commentators who got the joke or just commented that it was “bizarre”. I’d be interested to see what sort of reaction I’d get if I painted a portrait of Donald Trump or Putin.
There is a long tradition of satire in Britain and Ireland. Although satire is usually meant to be humorous, its greater purpose is often constructive social criticism, using wit to draw attention to both particular and wider issues in society. Hence Jonathan Swift’s famous ‘A Modest Proposal’ which he published in 1729 in which he suggested that the people of Ireland sell their children as food. This outrageous idea was never meant to be taken as face value. Satire is never meant to be taken at face value yet in this social media era things often are, which is why we are all such suckers for fake news, no matter how outrageous it is.
We can scoff at Trump supporters who believed his lies about Clinton and the pizzagate conspiracy but just yesterday a lot of people on twitter in the UK got worked up about a supposed protest by the far right against the new vegan sausage rolls. These sausage rolls had been introduced by Greggs the Bakers. It’s a long story, but a right wing TV commentator Piers Morgan had started the “controversy” when he called the company out on Twitter calling them ‘PC-ravaged clowns’ writing: “Nobody was waiting for a vegan bloody sausage.”

This tweet appeared in my feed yesterday. So as you can see the tweet was “liked” thousands of times and there were many outraged and puzzled comments about how the far right were pathetic and stupid.
Five hours after the original tweet the person who posted it tweeted, backtracked, presumably after realising he’d got it wrong and another tweet claiming it was a “joke” or “banter”, as he called it.

The traditional print media put everyone right, eventually.
So we all need to slow down and think about what we are looking at. Take a minute to see beyond the surface. I’ll leave you with an quote from Jonathan Swift to ponder.

23 thoughts on “Art as Satire”