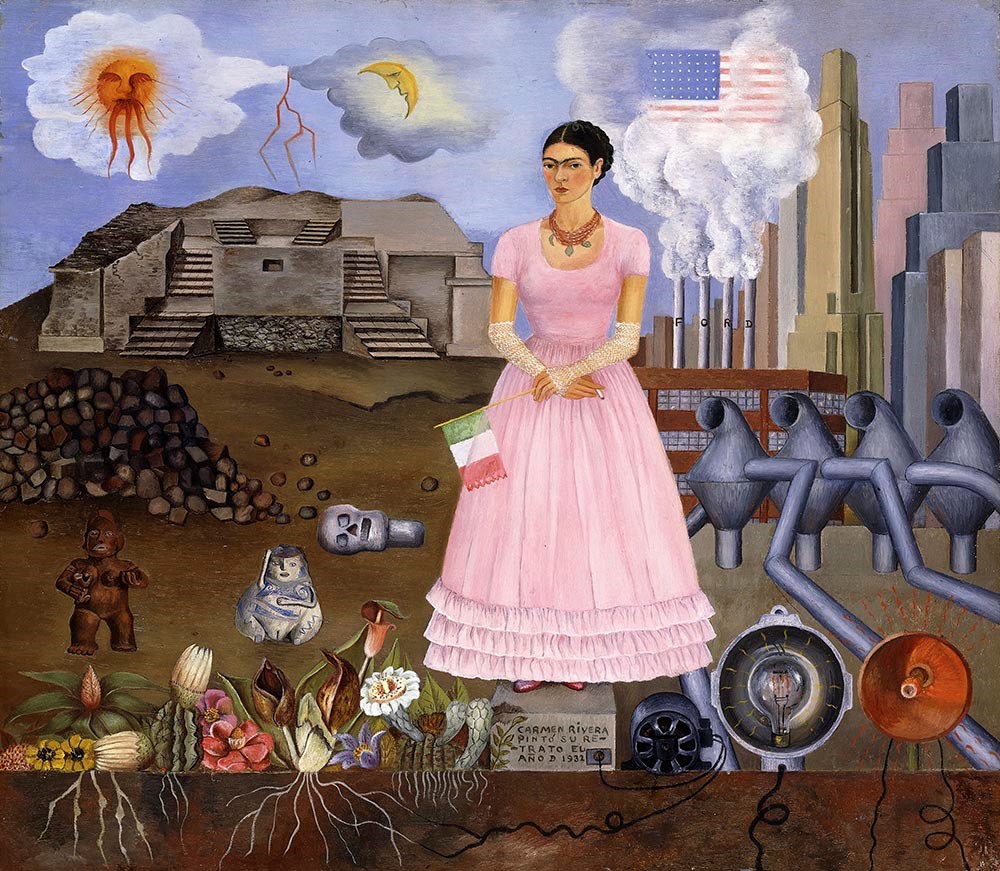 This weeks’ offering is from the early twentieth century. It’s quite an eclectic selection. From the wonderful geometric designs of Clarice Cliff and Sonia Delaunay to the decidedly whimsical Cicely Mary Barker to the whimsical (in a hard-edged traumatized way, maybe fantastical is a better word), Frida Kahlo.

Clarice Cliff   Clarice is working class hero. She was a ceramic artist, whose designs typify the 1930s for me. She was from Stoke-on-Trent in England, an area with a proud history in pottery. She started working in the pottery industry at age 13. She learnt how to paint pottery freehand in the day whilst time studying art and sculpture at a local Art School in the evenings. Clarice Cliff’s fame and success in the 1930s was unprecedented, the newspapers loved her. Her work is still very popular today and you can still bid for pieces on ebay.

Cicely Mary Barker AKA the flower fairy artist. As a little girl I was mesmerised by these paintings, especially the Fushia Fairy. I would study the details again and again. She was born in Croydon, south of London and suffered from epilepsy as a child. Like Clarice, she started studying art at age 13 at an evening class at Croydon School of Art. Her earliest professional work included greeting cards and juvenile magazine illustrations. At age 17 money from this sort of work became vital in supporting her family after her father’s death. The 1920s saw a sort of “Fairy Fever” in England with The Coming of the Fairies by Sir Arthur Conan Doyle, Peter Pan by J.M. Barrie, and the fairy-themed work of Australian Ida Rentoul Outhwaite. In 1923 Cicely’s Flower Fairies was published. It depicted botanically accurate drawings with the enchanting fairy images based on real children from Cicely’s sister’s nursery school.

Lyubov Popova was a Russian avant-garde artist (Cubist, Suprematist and Constructivist), painter and designer. She worked in a broad range of mediums and disciplines, including painting, relief, works on paper, and designs for the theater, textiles, and typography. I am no fan of cubism, its too intellectual for my tastes but I absolutely love her textile designs – especially the hammer and sickle print.  I think that many avant-garde paintings and designs still look fresh and exciting today. Sadly she died in her 30s, of scarlet fever in 1924 in Moscow.

Sonia Delauney  Sonia Delaunay was a from a wealthy Jewish Ukrainian family and she became as multi-disciplinary abstract artist and key figure in the Parisian avant-garde in the 1920s. Alongside her husband, Robert Delaunay, she pioneered the movement Simultanism. She was a talented painter, interior, textile, stage-set and fashion designer. She was also the first living female artist to have a retrospective exhibition at the Louvre in 1964, and in 1975 was named an officer of the French Legion of Honor.

Tamara de Lempicka, was a Polish painter active in the 1920s and 1930s, who spent her working life in France and the United States. She is best-known for her polished Art-Deco portraits of aristocrats and the wealthy, and for her highly-stylized paintings of nudes. There was a resurgence of interest in her in the 1980s thanks to Madonna who used some of her images in her videos such as Vogue .

Frida Kahlo is another artist who was rediscovered and reinvented as a feminist icon in the 1980s, long after her suicide in the 1950s. She was a Mexican painter, who suffered prolonged ill-health, including polio as a child and injuries from a tram accident. Inspired by Mexican popular culture, she employed a naïve folk art style to explore questions of identity, postcolonialism, gender, class, and race in Mexican society. Her paintings often had strong autobiographical elements and mixed realism with fantasy.

Emily Carr of British Columbia. She was a Canadian artist and writer inspired by the Indigenous peoples of the Pacific Northwest Coast. One of the first painters in Canada to adopt a Modernist and Post-Impressionist painting style, Carr did not receive widespread recognition for her work until late in her life.

Finally, I will end with a photographer whose work captured the suffering and deprivation of 1930s America during the Great Depression, Dorothea Lange. Her photographs of migrant workers were often presented with captions featuring the words of the workers themselves. I find her portraits of women and children of the Depression particularly affecting. Her first exhibition, held in 1934, established her reputation as a skilled documentary photographer. In 1940, she received the Guggenheim Fellowship.

A family traveling between Dallas and Austin, Texas. “The people have left their home and connections in South Texas, and hope to reach the Arkansas Delta for work in the cotton fields,” Lang wrote in her notes. “Penniless people. No food and three gallons of gas in the tank. The father is trying to repair a tire. Three children. Father says, ‘It’s tough but life’s tough anyway you take it.’