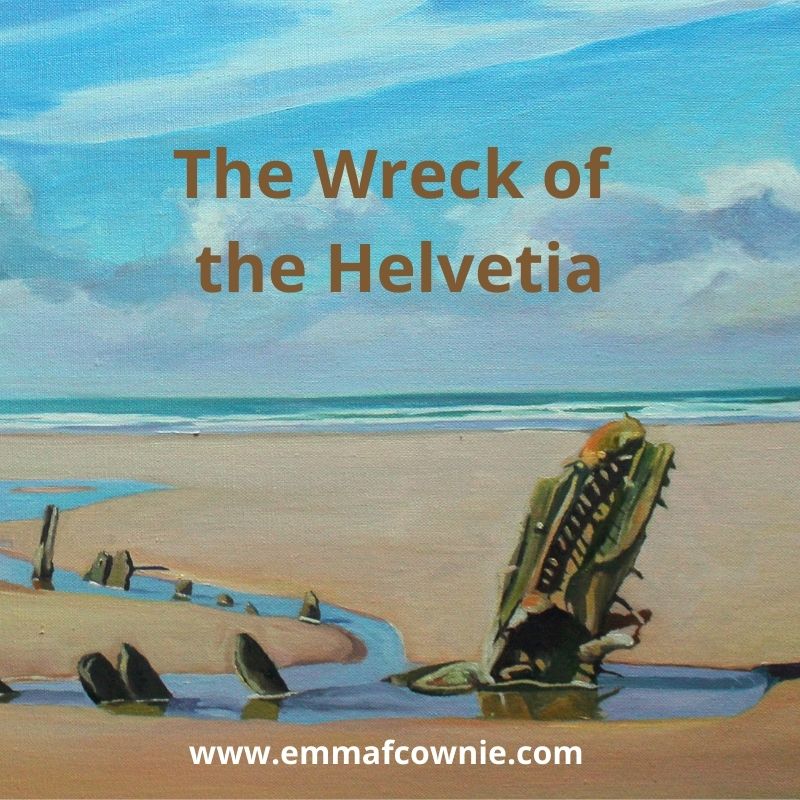 Rhossili Bay is a vast beach. The beach is 3 miles long. Photos do not do it justice.

A number of landsmarks are frequently photographed (and painted) along this great expanse – Worms Head the tidal island that stretches along at the Southern end of the bay, the old rectory that looks out from the middle of the shelf above the beach and in the midst of the sand, the Wreck of the Heletiva.  If you look very closely at the photo above you might just be able to make it out.

Need help? It’s the group of shark-like fins that  are poking out of an impossibly small pool in the midst of the sand. The Helvetia sank into the sand over 130 years ago and only her stubs of her wood ribs remain.

From on top of the Rhossili cliffs, it looks tiny. I have only been down onto the beach to visit it once. It’s usually surrounded by people photographing it.

A quick online search will turn up many, many images of this wreck close up; some with shadows, others with reflections, lots with beautiful sunsets, and a few stunners with starry skies. I don’t know how they arrange it when more than one photographer wants to take a photo at sunset?

She is surprisingly small.  These remains must be just the “nose” of her bow.  I am very taken with how organic she is. She is made of greenish rotting wood. Presumably being underwater for long parts of the day means that she is only rotting very slowly.  Up close, the rotted bow looks dragon-like. The iron nails that protrude from the wood are like the teeth of the beast. The rust from the iron colours the wood orangey-red.  Red and green, the colours of Wales.

I wanted to find out more about this ship. What did she look like before she sank? Did anyone die? Why was she called Helvetia?

I discovered that The Helvetia had been a Norwegian barque, which is a kind of sailing ship. She had been built in 1855 and registered at the port of Bremerhaven (in modern-day Germany).  She had sailed from New Brunswick, on the East coast of Canada in late October 1887. Although the sea around the Gower coast seems tame in comparison with the wild North Atlantic off Donegal, the coastline has seen the demise of many ships over the centuries. The Helvetia was caught in bad weather and hit the dangerous sandbank of Helwick Sands. She was then swept around Worm’s Head and into Rhossili Bay. Her captain decided to drop anchor but the galeforce wind meant her anchor was ripped free from the sand and she was wrecked on the sands of Rhossili beach. Fortunately, no lives were lost.

During the following weeks, her cargo of timber was collected from the beach and gathered for auction sale. The wreck itself was sold to a local man, who intended to strip the precious copper keel from the vessel but before he got the chance, the Helvetia sank into the sand. Local legend says that he had to settle for salvaging the ship’s deck boards!

I tried to find a photo of the Helvetia before she sank and I discovered that there are many ships that have born that name in the past and in also in the present day. Here are some examples.

This got me wondering why Helvetia was such a popular name for ships. What did it mean anyway? So I did a bit of research and found out that Helvetia was the personification of Switzerland, like Britannia, is for Britain, Marianne for the French Republic, or Erin is for Ireland. So why were Norwegians naming their ship Helvetia? It seems I was totally on the wrong track here.

I did some research and I found that Hel is also an Old Norse word. It has several meaning. It could mean “Hel” who in Norse mythology was a goddess who ruled the underworld, Helheim, or Hel. Hel-Víti thus means “Hell-torment”. That would be a great name for a Viking ship, I think. Hel, however, also means luck which is possibly a better name for a ship, especially as sailors are incredibly superstitious people. If you made your living on the changeable sea you’d be very superstitious too. On a tangent, it was apparently customary among Vikings to say “hell og lykke” (luck and happiness) when they met. This is supposedly were English speakers get the greeting “hello” from.

Anyway, I had assumed that there was a rule that only one ship at a time could bear a particular name – like the Ark Royal, but it could be reused again and again. No so. There were many other ships in the C19th with the name Helvetia – more than one of these ships were passenger ships that took people who wanted to emigrate to the USA, another Norwegian ship, SS Helvetia spent much of the 1870s & 1880 steaming across the Atlantic from Liverpool to New York.  Conditions must have been poor as there was a cholera outbreak on one of these voyages in 1866 and the ship was forced to return to Liverpool.

I found another Norwegian ship called Helvetia, operating across the Atlantic in this period. On the “Noway Heritage” website this ship is described as a Bark (Barque) like the Rhossili ship. This ship was also built in Bremerhaven, but in 1858 not 1855, and was wrecked in 1888, not 1887. I don’t know if this is the same ship as the Rhossili wreck. Quite possibly. There is an online passenger list for the Bark Helvetia from her 1861 voyage from Germany to New York here, and you can see the names of the framers and skilled-labourers who were looking for a new life in the United States.   According to the “Norway Heritage” website, the Bark Helvetia also sailed to Quebec, in Canada, on a regular basis.  She also sailed to Swansea twice in 1866. This Canadian link makes me think that it is the same ship. She regularly sailed from Norway taking hundreds of passengers presumably looking for a new life in Canada in the 1860s (you can see the passenger list here). Incredibly, between 1825 and 1925, more than 800,000 Norwegians immigrated to North America—that’s about one-third of Norway’s population! Most of them immigrated to the US, and lesser numbers immigrating to Canada.  Hunger and poverty pushed them to leave their homes. The voyage must have been grim beyond belief. In 1861 a ship called the Helvetia, possibly not the Rhossili ship,  is recorded as carrying 344 passengers in steerage from Drammen (Haagensen) but by the time they arrived in Canada, there had been five deaths. Looking at the other ships that arrived in Canada in that summer, smallpox, and measles were also rife on board the crowded ships. Deaths were not uncommon.

Later on in the 1870s the Helvetia sailed from London and then Truro, in Cornwall. I am guessing that she took English passengers to North America and brought timber back to Europe. This intrigued me. Distant relatives of mine left Scotland in the 1860s and started a new life in the States, setting up a successful business selling furs in snowy Des Moines, Iowa. Perhaps they traveled on a ship like the Helvetia? Interestingly, many Norwegians settled in Iowa too.

For a sea-faring nation, Britain has preserved precious few sailing ships from the past. The Helvetia (and her many namesakes) deserves to be remembered as one of the thousands of ships that played a role in the mass migration of peoples from Western Europe to North America in the 19th century. She may have met her end on in the sands of a Welsh beach, but she had been a workhorse of the North Atlantic and it was very fortunate that her final cargo was timber and not people. It seems very fitting that this Scandinavian ship lies on the sands of Rhossili Bay. As behind her off to in the distance another dragon, the Wurm, or  Worms Head stretches across the horizon.  Wurm is a Viking word. It means “dragon”.

The Wreck Of The Helvetia, Rhossili, Gower

I was contacted by Sam Zhang who had an image of a model that was made of the Helevtia in her hayday It is a cut out from The Illustrated Times news paper in German, dated 6th August 1859. unfortunately the article it is for is cut out and most likely lost. I am very grateful to Sam for sending me this image.
Read more about the Helvetia

My Walk Along Worms Head