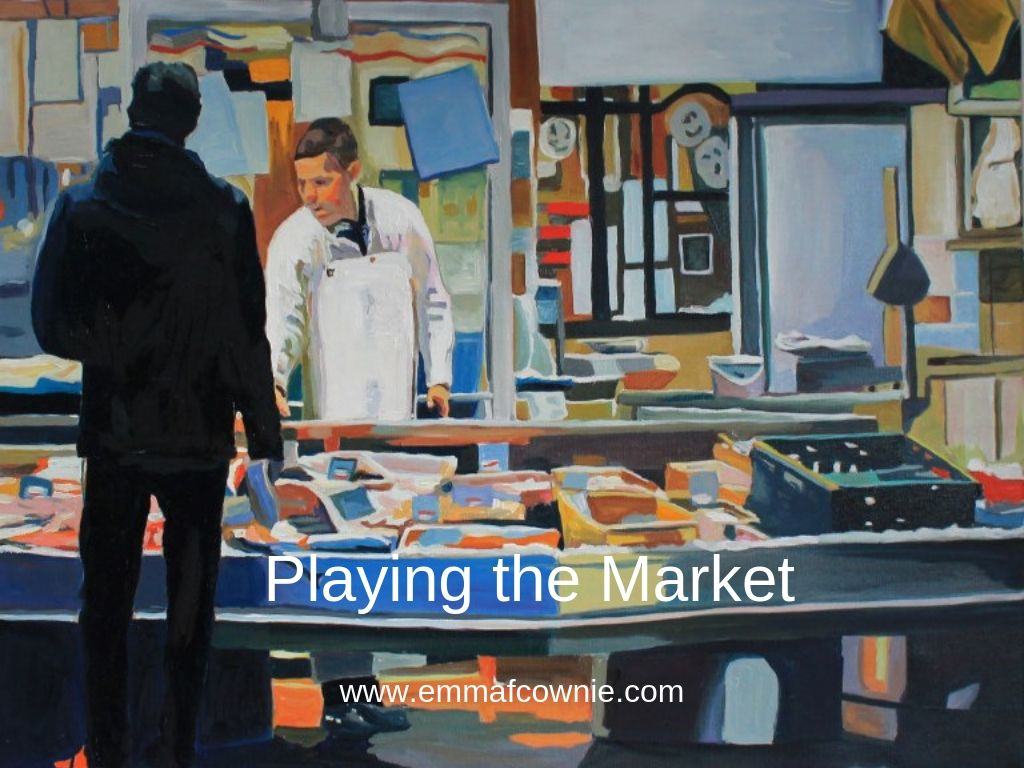 I love markets. I love outdoor markets and indoor markets alike. A busy market is fun to visit as a shopper, but even better for an artist. To be honest I often just look at the people and stalls and don’t buy a lot. It provides inspiration. There are lots of things to look at, the light, in particular, is what attracts me, whether it’s indoors or outside, there is always lots of natural light at a market. I also like the distracted people, and also the bright colours of the stalls and the people shopping or sitting outside at cafes (both in summer and winter).

Swansea has a cracking indoor market that was rebuilt after the original market was blitzed during the Second World War. It has a wonderful barrel-shaped roof. The light is a combination of natural light and artificial light. The light in the painting below is natural sunshine that was streaming in from the roof.

Outdoor markets are more variable, the rain can make them rather sad places to be in but in the sunshine, they are great fun. The Uplands, in Swansea, has a monthly market.

I particularly like the dogs that come along too. They are usually on leads but also sitting with their owners at outdoors cafes at and near the markets. The strong winter shadows make for a dramatic composition.

I also like the little “unobserved” vignettes, such as these children playing with a typewriter. I like to imagine the conversation this smart-phone generation might be having about this relic from the last century.

There is a Victorian indoor Market in Cardiff too. It reminds me of a railway station, with its steel fixtures, supports, and arches, the huge glass, skylit, two-tone ceiling. They have a record shop upstairs and several cafes.

There is a fish stall by one of the two entrances, it gets natural light from the left side. This stall is particularly expansive, the fish and crabs are displayed in a generous display shelf. There is plenty to choose from. Again, it was the light that drew me to this composition. Although we cannot see the customer’s face, only his back, I am speculating on the conversation he is having with the fishmonger. I love that word “monger”. Its a wonderfully old-fashioned word (probably Anglo-Saxon) for someone who deals in a particular trade, there are others like an ironmonger, cheesemonger and more unsavory ones like fleshmonger, scaremonger and warmonger.

My parents live near Stroud, in the Cotswolds and I sometimes visit markets, there’s an indoor market most days of the week as well as an outdoor farmers market on Saturdays. I visited the market last Saturday.

Again, its the dogs that catch my eyes. There are lots in Stroud of different shapes and sizes. You can tell a lot about an area by its dogs. Fashions come and go in towns and cities like Swansea. Huskies used to be all the rage, then smaller dogs like French Bulldogs became popular, more recently cockerpoos are everywhere. When I visit Cirencester I see lots of dachshunds, in Stroud, there’s more a mix from larger lurchers, Jack Russells (my favorite dog), and very cute Chihuahua-mixes with Jack Russells. In Ireland, the towns also favor smaller dogs but in rural Donegal, it’s larger collies and black Labradors that are very popular. So as we drove the length of Ireland, I noticed that little Mitzie (our Dashund/Jack Russell cross) got admiring looks in Wexford but it was Biddy (our Collie cross) who was more popular in Donegal.

Again, it’s the “unobserved” that I am interested in. A dog on its own isn’t as interesting as one with its owners unless it’s looking “out of shot” at its owner. In “Just a Second” the dachshund is obviously hoping its owner is going to produce a treat from her bag. I doubt it somehow.

In “Table for three”, my most recent painting, the little pooch looks very much loved by its family, after all, as she has the best seat. I would not be surprised if she has been fed a biscuit or two or a slice of cake. Look,  there is a knife, and a stack of plates under the coffee cup on the left, evidence of food eaten.  There is a clearly comfortable vibe between the two women, whom I am guessing have been in a relationship for a long time. There are no smartphones to interrupt their revery in the sunshine. The woman on the left has difficulty walking as she has a walking stick in her hand. I love the rich red color of her hair, catching the sunshine. That color says to me I am still young at heart. It chimes with the red stripes of her partner’s top. This painting has caught a moment. It may an illusion. For all I know, they could be having a row, but I really don’t think so. I enjoy looking at the details in the picture and speculating and writing a story about them.

If you want to see more of my people and or animal paintings please click here.