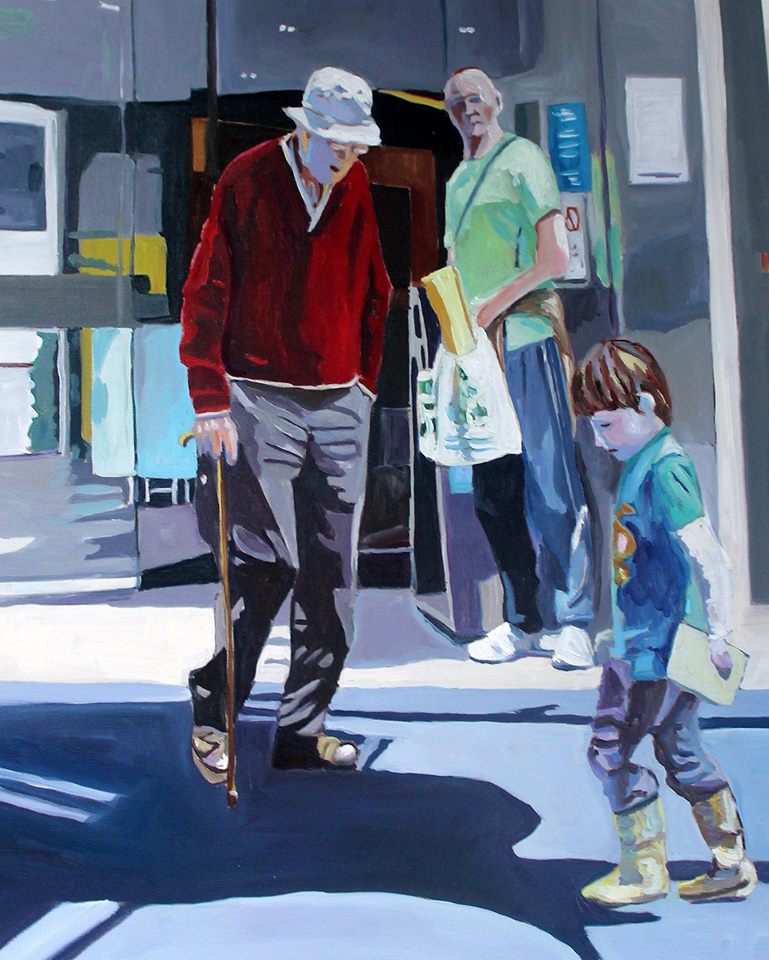 A new oil painting “The Shadows We Cast” this oil painting is inspired by watching three people waiting, on a brilliant sunny day, on the High Street for their loved ones inside the shop.

“Although the old man who was waiting for his wife and daughter, he is not with the man who is protectively looking on as his son plays with the shadow cast on the pavement. They both wait for their wife and mum.
However, they all seemed connected, and this is heightened by them by being male and in the act of waiting.

I was going to call the painting “The Three Ages…” (of man) as we can see Bampi (grandfather), father and son but then thought the “Shadows We Cast” more lyrical as it not only describes literally the shadows cast, by the sun on the hard street and equally by the old man and boy, both “playing” in the contrasting darkness as they wait, which is in contrast to Dad’s watchful eye but also lyrically the protective loving effect others have on other lives and they have on other’s lives.

The old man is connected to the the two others in that he is waiting for the legacy he has in this wife and daughter and the man look on at his legacy in his son, a sense of now and the future in his facial expression, a wondering of the shadow he is casting in his son.

The father is a great juxtaposition here as he is seriously intent and firmly in the present reality of the moment whereas the son is in a fantastical revere of play and the oldman deep in the imaginary of a fondly remembered past.

The past can also cast a shadow on this sunny moment just as the child’s playful musing?

Only the father is resolutely here in the sunny present, perhaps allowing the other two their play?
Perhaps that is the shadow we cast, the protection that allows others to be happy and secure in their play, in themselves?”