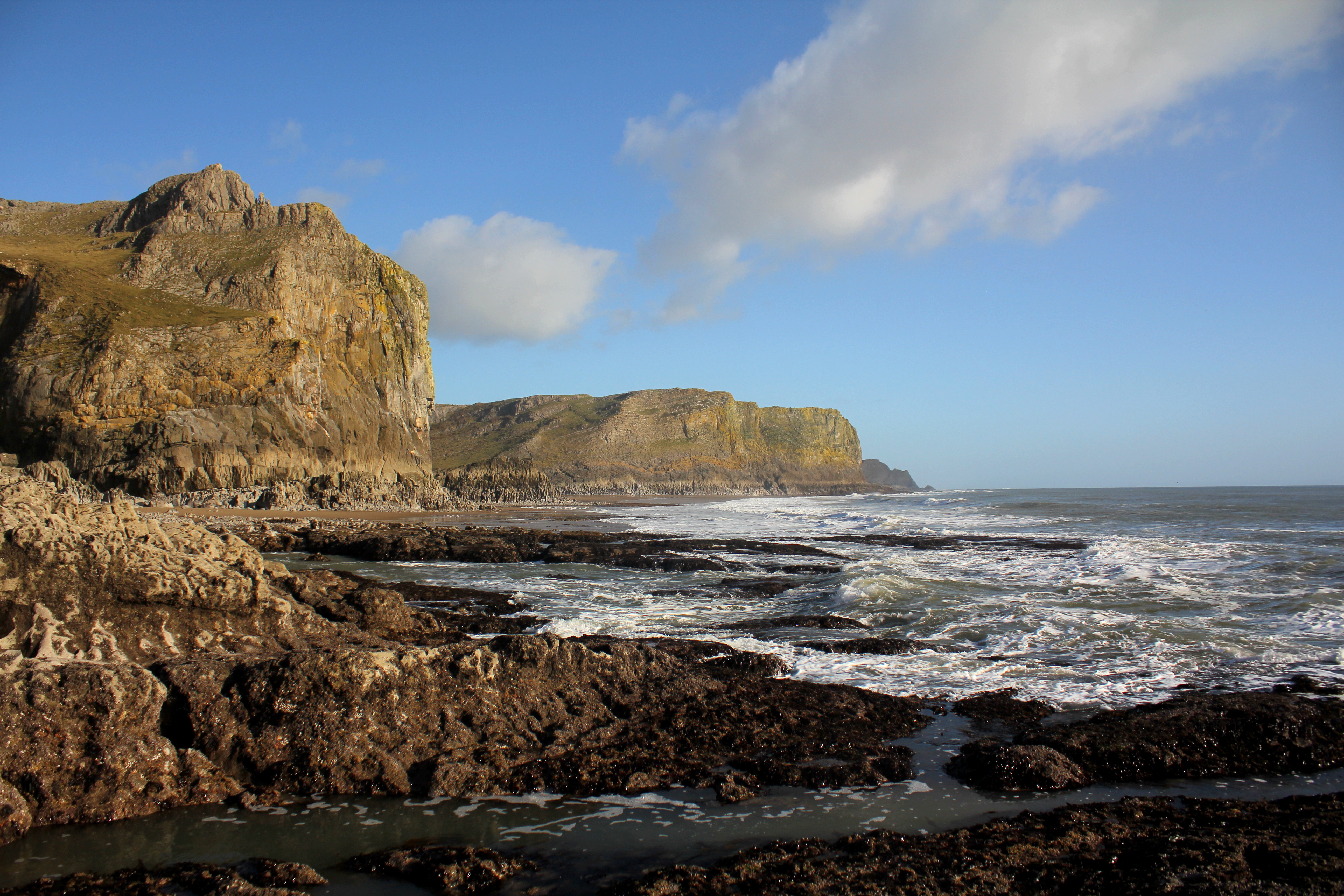 The sun is out. So I am out too with my camera. Looking for inspiration for some Gower landscape paintings. We drove down to Rhossili at low tide to look at the rocks. My husband is from Northern Ireland and he was feeling homesick for some monumental rocks like those at Giants’ Causeway. Now, Gower doesn’t have pillars of amazing basalt rock but we do have some pretty grand tors.

The walk from the National Trust car park at Rhossili was certainly bracing. The wind was super cold and strong enough to make me nervous about approaching the cliff edge to take photos. People have fallen to their deaths here. The sheep are all pretty blase about it, though.

Behind the bay rises Rhossili Down to a height of 600 feet. It is the remains of an old beach level much eroded later on by the ice sheets of the last but one ice age. The bench of land below, with the Old Rectory in its middle, was caused by earth slumping down from above during a cold phase. Although, it seems like a wild and out of the way place, people have been here for a very, very long time. A Neolithic hand axe – the oldest human artefact found in Wales – was found here and is now on display in The National Museum in Cardiff.

We walked into the wind and past Worms’ Head with its exposed causeway and found a flock of sheep eating turnips scattered amongst the straw-stubbled ground. We walked along cliff tops, and looked over a long dry stone wall inland to the medieval strip farming that still continues in the fields there. This is one of only a few Medieval “Vile” Field systems left in Britain.

The path then splits. You can continue along to top of the cliffs to Mewslade or take a path to the right which dips down to the top of Fall Bay. There is a small collection of wooden boats way above the beach, some are attached to metal rings embedded into the rock. Its a lot easier to make your way down to the beach through this path than it is via a gap in the cliffs at the east end of the beach.

The high parts of Gower are made of the oldest rocks. The downs that loom over Rhossili  and Cefn Bryn are made from Old Red Sandstone.The rest of Gower is made from Carboniferous Limestone. The coastline cuts across a bed of folded of Limestone at an angle of 45 degrees towards the sea, to expose curious diagonal layers of rock.

So here my afternoon takes a slightly wetter turn. I had climbed onto rocks that lay between Fall Bay and Mewslade Bay further along the coast. The sea was crashing around me. I felt quite safe. The rocks were not slippy. I thought the tide was still going out.

Then my husband shouted at me “The Tide’s Coming in” and I looked at my watch. It was exactly 3 o’clock. Low Tide. For some reason, I then decided that the crashing waves were coming a lot closer. I hesitated, the patch of beach I had jumped from onto the rock was submerged in incoming water. I waited. The water just got deeper.

Then, my stupid PTSD head kicked in. It goes for the worst scenario. What if it never retreated? What if was going to get washed away? I was going to get washed away! I was certain. So, I panicked and jumped into the water. It came up to my calves. It was really cold. The bottom half of my jeans were very wet and my walking boots full of water. I sloshed through the sea water and onto dry land. Emergency over, I tried to cover my sense of foolishness by blaming my husband for “frightening me”.

I didn’t drown or even catch cold for having to walk back to the car with wet boots and drive home again. I had a hot bath as soon as I got home but there’s always part of me that believes that you have to suffer (or at least go to great lengths) in the process of creating your art so I find mild exhaustion and hardship rather satisfying. As if deep down I think it will somehow make the paintings better!