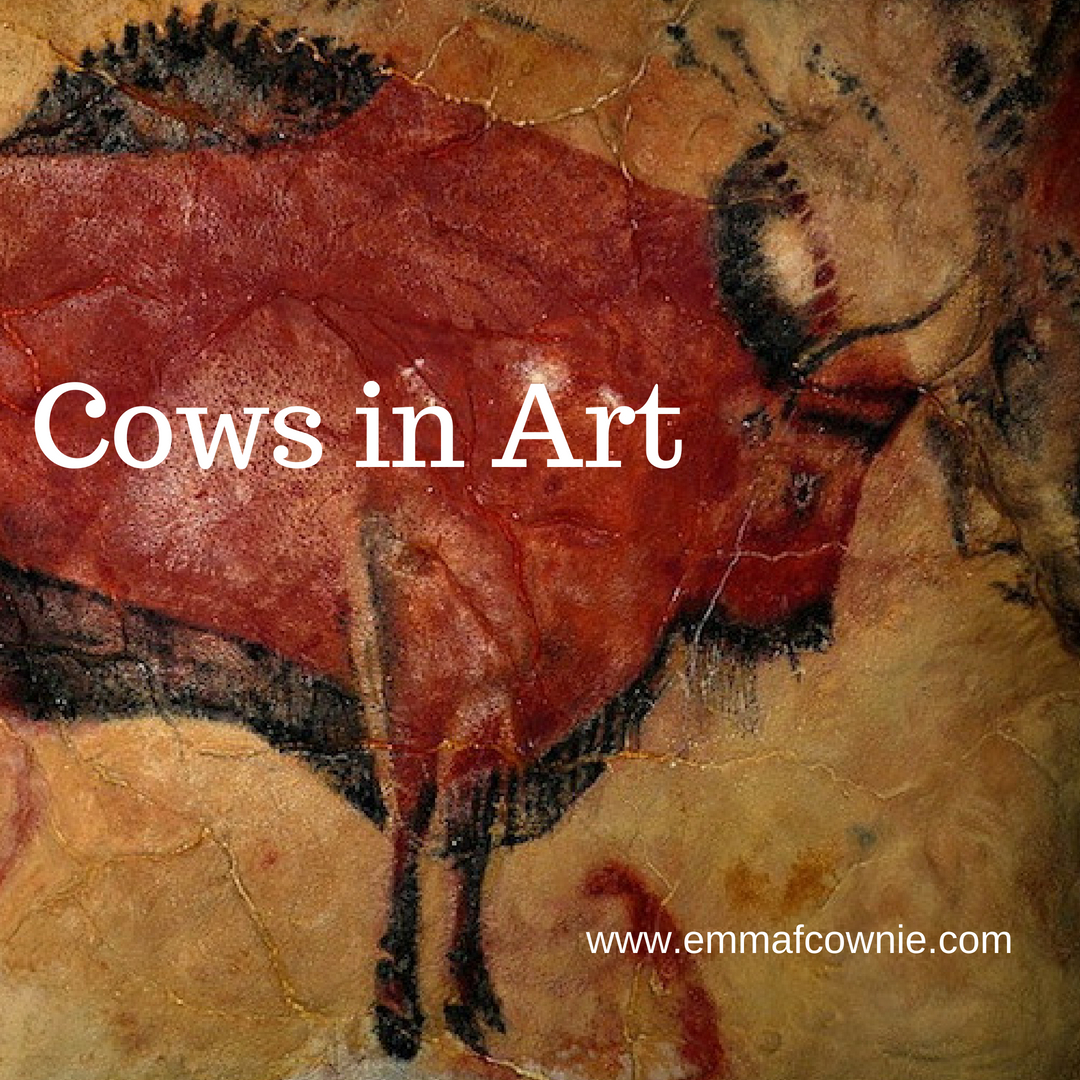 Well, here I go down another wormhole of History/ Art History. This time I have been pondering the place of the humble cow or ox in figurative art in History. It’s such along one I have had to divide it into two parts. It could easily be a book! It’s a very long history which is not surprising as humans have depended on cattle for their survival. Cattle have represented at different times such things as life, wealth, power and even the divine.

Man and cows, ox, oxen, cattle, go back a long, long way. People have been hunting, and more importantly from our point of view, painting bison and wild cattle in Europe for more than 17,000 years. I use the term “people” advisedly, as there is evidence, based on measuring hand prints, that the first figurative artists could have been women. Men may well have hunted these beasts but women would have been very familiar the anatomy of these beasts from cutting up their carcasses for food and clothing.

One of the largest animals in the “Hall of Bulls”, painted on the walls of a the Lascaux, caves in France, is a black bull. He is an incredible 5.2 metres (17 ft) long, making him the largest animal discovered so far in cave art.

There are many representations of cattle in prehistoric art in caves and on rock faces in Spain, India and Africa. Who knows what function these images served. were they meant to exert some sort of magical power over these animals? Were they a sort of prayer, or a pictorial shopping list for the gods?

If, wild cattle were important to prehistoric people, the domesticated version, were even more so. About 10,500 years ago, cattle were domesticated from as few as 80 wild oxen in southeast Turkey. These cattle could now be used for food and clothing but also as a beasts of burden, pulling ploughs and carts.  The Ancient Egyptians, who ruled Egypt over 5,000 years ago, used them in agriculture, for food, milk, leather, and also for sacrifice. These animals fulfilled dual practical and spiritual roles (as many animals did in Ancient Egypt).

Cattle for the afterlife

They came to be considered so important that many Egyptian gods were considered to have the form of cattle, notable deities being Hathor, a very popular female god, Ptah (as the Apis Bull), Menthu (as the Bukha bull), and Atum-Ra (as the Mnevis Bull). The cow and bull are repeatedly represented in Egyptian figurative art, 2D and 3D, many bulls were also mummified.

Cattle had dual practical and spiritual role in the other Ancient Mediterranean agrarian societies too. The Egyptians, however, were unusual in honouring the female aspect of the animal through the worship of the goddess Hathor. She one of the most important and popular deities in Ancient Egypt, who personified the principles of love, beauty, music, dance, motherhood and joy.

Bulls were regularly sacrificed on altars in the ancient Greek religion, usually at an outdoor altar with hymn and prayer.

After the introduction of a metal coinage into ancient Greece, this method of exchange was commemorated by stamping the image of an ox on the new money; while the connexion between cattle and coin as symbols of wealth has left its mark on the languages of Europe, as is seen in the Latin word pecunia and the English “pecuniary,” derived from pecus, cattle.

The Greeks seem to have been very impressed by the strength and virility of the bull, worried by it even. I say this because a very famous Greeks/Cretian myth concerns a beautiful white bulls that King Minos cannot bear to have sacrificed, whom he saves only to have his wife also fall in love with the bull and later produce a bull/man hybrid baby, known as the Minotaur.

King Minos later had the Minotaur shut up in the “Labyrinth”,  an underground maze, and fed Athenian youths and maidens to him on a regular basis. That was, until Theseus, a prince from Athens, came and killed him and found his way out of the maze with the help of a ball of thread.

The Ancient Minoans also engaged in a spot of bull jumping, presumably before the ritual sacrifice of the animals. Again, this all seems tied up with virility and a conspicuous display of masculinity.

The Ancient Romans also sacrificed bulls for the well being of the people and the state and they are depicted in many bas reliefs.

The bull was also used a decorative motif in the mosaics that decorated the villas of wealthy Romans. Some of these designs show that bulls were also used as sport, in the gladiator’s arena.

There was a sacrificial element to these bloody games but also a punitive one too as “damnatio ad bestias” (damnation to the beasts) was reserved for military traitors, conquered foes, and convicted criminals bound for execution, which included those Christians accused of sedition and treason.  This is how early Christian saints, Perpetua and Felicity, were martyred in North Africa. They were sent to the amphitheatre and repeatedly gored and thrown by a bull before they were dispatched by a soldier’s sword.

The bull also inspired an instrument of torture that was also used on early Christains. The brazen bull, bronze bull, or Sicilian bull, was originally designed in ancient Greece. It’s not clear if it really existed or was really good “fake news” made up to frighten people. The life-size bull was said to be made entirely out of bronze, hollow, with a door in one side. The condemned were locked inside the device, and a fire was set under it, heating the metal until the person inside was roasted to death. It was repudely used to kill several early Christians including Saint Eustace, with his wife and children, Saint Antipas and Pelagia of Tarsus.

Interesting, after all this maleness and display of masculinity, bull sacrifice, as taurobolium, also became connected with the worship of the Great Mother of the Gods, Magna Mater, from the mid-2nd century onwards.

Another Roman cult, popular with soldiers, in which a sacrificial bull played a role was that of the 1st–4th century Mithraic Mysteries. In the so-called “tauroctony” artwork of that cult, and which appears in all its temples, the god Mithras is seen to slay a sacrificial bull.

So, after all this blood and violence of the Greco-Romano world, it will probably come as something of a relief that my next post will explore the somewhat gentler world of the cow/bull in Medieval and Modern society and culture. The spiritual/virility/wealth aspect of the cow/bull continues to be explored. However, we are reminded of the continuing violence and brutality meted out towards, the cow/bull in the work of artists of like Picasso and Hirst.

16 thoughts on “Cows in Art (The Ancient World)”