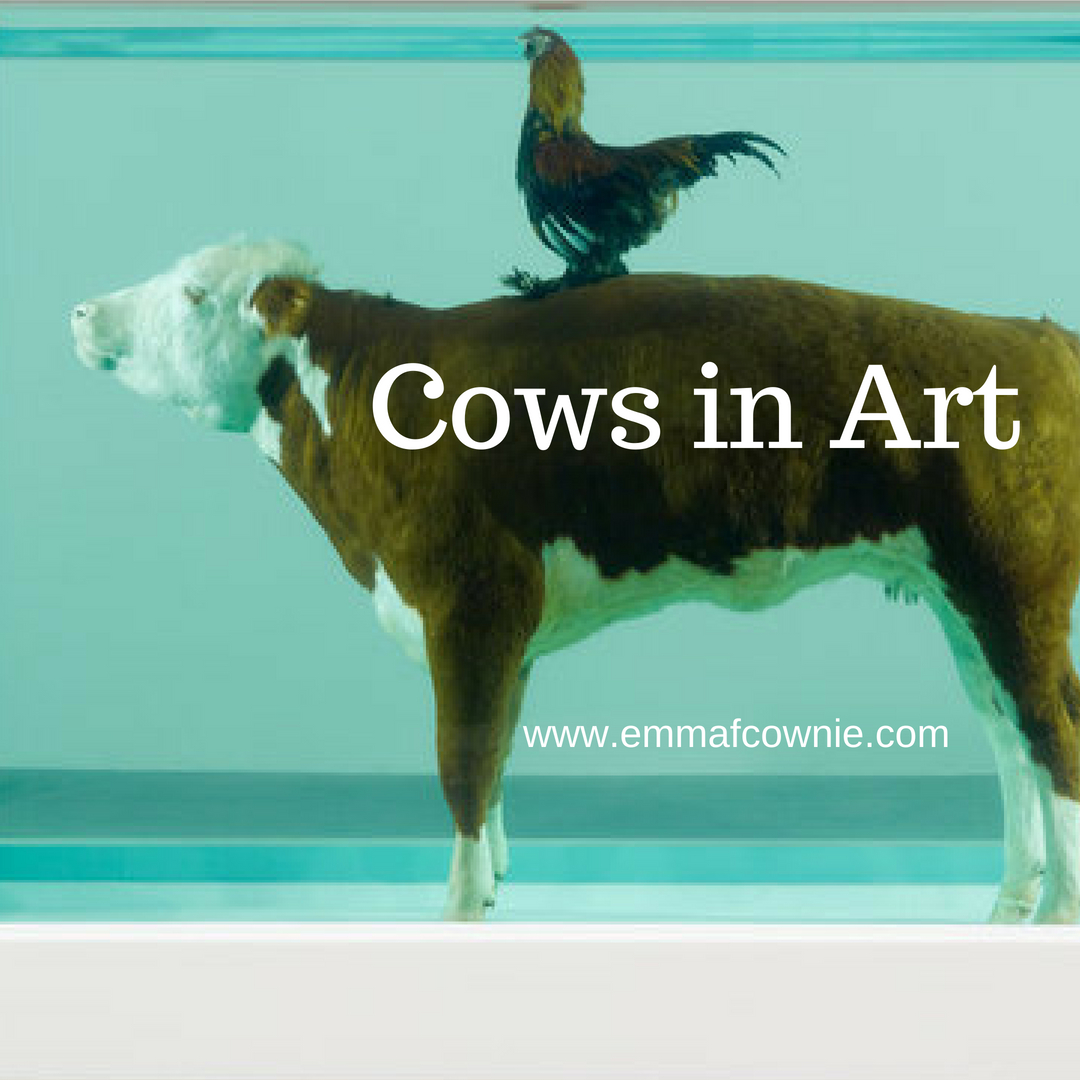 In terms of figurative art, before the thirteenth century, the sort of ox you were most likely to see in a Medieval manuscript was one with wings. He was usually depicted near a man with a halo around his head either writing or holding a manuscript. This man is Luke, one of the four evangelists, who were credited with writing one of the gospels of the New Testament. The winged ox was meant to not only represent the Luke, Evangelist, but also an aspect of the nature of Christ, as well as of the virtues required of a Christian for salvation. In this case, the ox was a figure of sacrifice, service, and strength.

Later the ox became a regular feature of Nativity scenes. St. Francis of Assisi, that well-known animal lover, is credited with staging the first nativity scene in 1223. He did this so that Christians who could not afford the dangerous and expensive pilgrimage to the Holy land, could venerate Christ. Apparently St. Francis set up a manger with hay and two live animals—an ox and an ass—in a cave in the Italian village of Grecio. He then invited the villagers to come gaze upon the scene while he preached about “the babe of Bethlehem.” It was a massive hit. Within a couple of centuries, nativity scenes had spread throughout Europe and is still with us today. It also became an incredibly popular subject for religious paintings. The ox and the donkey, were a very successful double act, first of all living creatures the to venerate Christ.

14 British library Nativity Description: [Detail] First scene.The Nativity. In the foreground, the Virgin lies in bed, and Joseph leans on his staff. Christ lies in the manger, with the ass and ox behind, and the star above Title of Work: Psalter of Robert de Lisle Author: – Illustrator: Madonna Master Production: England {London?]; circa 1310 Language/Script: Latin / –

We get glimpses of the non-religious importance of cattle as a source of food in the Bayeux Tapestry, which shows Sussex cattle being “requisitioned” by the Norman invaders before the Battle of Hastings in the 11th century. Norman servants have taken the rounded up livestock and are slaughtering it. The little boy with his dog might be tugging on the axeman’s tunic to implore him not to slay his family’s ox.

Medieval book of hours were Christian devotional books made for lay people.  They usually contained a collection of texts, prayers and psalms and were richly illustrated, providing us with an important record of life in the 15th and 16th centuries.

Art underwent a crisis with the coming of the Protestant Reformation in the 16th century. Artists in Protestant areas of Northern Europe painted far fewer religious subjects for public display.  Instead, many of these artists countries diversified into secular forms of art like history painting, landscapes, portraiture, and still life. Thus, the cow and ox began to appear as a sort of status symbols in rich patrons’ paintings.

Or as part of a bucolic landscape, with pretty milkmaids; it’s religious significance now pretty much abandoned.

When the agricultural revolution got underway in the 18th century Britain, cattle were part of the drive to make farming more efficient and scientific. Cattle were now seen as products of this new way of framing.  Paintings were a celebration of the success of selective breeding. Thus we see enormous musclebound animals with tiny heads and legs! They were now status symbols.

A PRIZE COW IN A LANDSCAPE by Richard Whitford (British d.1890) at Powis Castle, Powys, Wales. The painting was commisioned by the third Earl of Powis. Oil on canvas, 50.8 x 61 cm. This animal won third prize at Smithfield in 1872.

During the 1820s and 1830s, fine art was dominated by history paintings (with subjects that were political, historical, or religious). John Constable, the realist English painter, led a quiet revolution against this fashion.  He worked directly from nature “en plein air” , painting many full-scale preliminary sketches of his every-day landscapes to test the composition in advance of finished pictures. Cattle appeared as part of his real English landscapes.

Constable’s work was embraced in France, where he sold more than in his native England and inspired the Barbizon school who included artists like Jean-Baptiste-Camille Corot, Théodore Rousseau, Constant Troyon and Jean-François Millet.

French artist Rosa Bonheur was also influenced by the work of the Barbizon school. She was a very successful animalière (painter of animals) and sculptor, known for her artistic realism. Her cattle are noble and beautiful.

During the late 1860s, the Barbizon painters attracted the attention of a younger generation of French artists studying in Paris, including Claude Monet, Pierre-Auguste Renoir, Alfred Sisley and Frédéric Bazille. In the 1870s those artists, among others, developed Impressionism and practiced plein air painting. Cattle also appear in a number of the paintings of Dutch and Breton landscapes by Gauguin and Van Gogh.

The Iberian Peninsula,  Spain and Portugal, unlike the rest of Europe, never given up the tradition of bullfighting. The Spanish artist Pablo Picasso often used bulls as a metaphor in his art. Depending on its context, they have been interpreted in various ways: as a representation of the Spanish people; as a comment on fascism and brutality; as a symbol of virility; or as a reflection of Picasso’s self-image.

Pop Art (such as Andy Wharhol’s screen prints) and advertising for products such as mass-produced cheese triangles (Laughing Cow – La Vache qui rit) are almost indistinguishable. Here the cow is a commodity.

British artist, Damien Hirst uses real dead cattle in his work. His Turner Prize-winning “Mother and Child Divided” installation featured the bisected corpses of a cow and calf in closed tanks, preserved by formaldehyde solution. These works look like large-scale version of the gruesome things I saw in jars my biology lab at school. This is no accident. They are suspended in the same liquid, formaldehyde.

Hirst was reportedly advised to use alcohol to protect his artworks. He chose to use formaldehyde instead for its hazardous, skin-burning properties. The exhibition summary on Tate’s website states that Hirst was attracted to the compound because “if you breathe it in it chokes you and it looks like water”. He claimed to be using it to “communicate an idea”, rather than as a preservative.

I find his work rather upsetting. I initially wondered if these works were a comment on the cruelty of modern factory farming and mass production of meat and milk. Dairy cattle are separated from their young to produce milk for humans. It seems, however, instead he is drawing on the religious symbolism of the arrangement. Hirst who attended a Catholic school is drawing on religious iconography. Instead of the joyful unity of mother and baby, which the traditional image celebrates, he presents a “mother and child not only forever separated from one another, but also fatally severed in themselves”.

I don’t know if Hirst has spent time watching cattle. A few days ago I spent an hour or so watching a small group of free-range heifers with their calves on Pennard Golf Course. One cow spent a good 5 minutes washing her son who then licked her back as if to say, thanks Mum. The bond between them was palpable.

Damien Hirst has attracted much controversy for his use of dead animals in his artwork. It has been claimed that he may have been responsible for the deaths of as many as a million creatures in the name of art! The toll has included 13 sheep; seven Holstein Friesian cows; five calves; four bulls; three baby horses; two pigs; one brown bear; one zebra; 27 sharks and 668 fish. Apparently, in 2012 more than 9,000 butterflies died during the 23-week exhibition In and Out of Love at the Tate Modern Gallery in London. The controversy does Hirst no harm as he’s said to be the world’s richest artist with a claimed personal fortune of around £215m.

I will end with an artist who, unlike Hirst, clearly loves animals and paints with tenderness and lightness of touch.  Benjamin Björklund is a self-taught Swedish painter who works in watercolors and oils and I love his work.

In last two thousand years, the cow has gone from a symbol of sacrifice, service and strength, to a commodity and a status symbol and most recently in the work of Hirst, to something whose dismembered carcass is designed to shock and repulse viewers.  I personally prefer the sensitivity of the work of artists like Björklund who recognises cows as individuals and as essentially gentle creatures or even the Medieval artists portrayed the Ox and the Donkey as reverent witnesses at the Nativity. However, I think I have to recognise that Hirst’s work is a comment on the violence that humans visit on the cow.