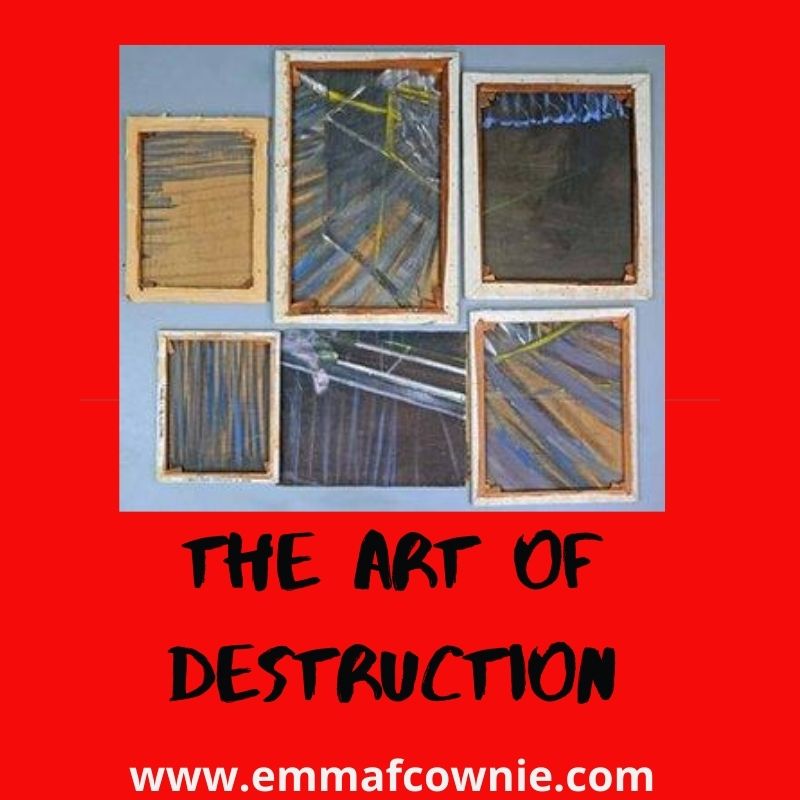 “When a picture isn’t realized, you pitch it in the fire and start another.” (Paul Cezanne)

Artists create. Over the years they can create a lot. Not all of it is good.

A while back I read an article about a man who had been left hundreds of paintings by a relative of his, an aunt I think, who was an enthusiastic amateur artist. My recollection of the paintings is that they were bad. Really bad. I mean, I would have struggled to keep one of them (hidden in a dark corner of the house) but he had hundreds of them! Sadly, they weren’t quite bad enough to be added to a collection of the wonderful Museum of Bad Art.  Yet, the loving nephew was going to keep and treasure them all! This story has haunted me. As artist Robert Glenn wrote, “There’s enough bad art in the world already and we don’t want to add to it by leaving substandard stuff out and about.”

I just don’t have the room for everything so a cull has been taking place. I have been destroying old paintings of mine that I don’t think are up to the mark. It’s a form of curation. In fact, I believe that destruction and renewal are central to the all creative processes. Writers cut and redraft. I think of the time I wasted reading Harper Lee’s “Go Set a Watchman”, which turned out to the first draft of the much-superior “To Kill a Mockingbird”. Harper Lee was right not to want to publish it. Painting is the same.

An element of destruction and renewal has always been part of my process. If part or all of a painting isn’t working, I would much rather scrub the paint off the canvas and start again than let it dry and attempt to paint over the error. I usually have to work myself up into a minor frenzy to do this. I feel better looking at a scrubbed canvas than one that is “wrong”. Sometimes, I might spend a whole day on a painting that I scrub away and start again the next day (to the dismay of my husband). Usually, this is down to poor light. I don’t often do this, but I think its important to be able to”kill” your work so that better work can come forth. It’s reassuring to know that great artists like David Hockney have also destroyed unsatisfactory work in the process of creation.

Over the years I have stored older, or just less successful paintings away in the attic, behind stacks of other paintings. They fall into two categories a) early work done on cheap canvases. These are easy to destroy with a metal spike. You get what you pay for, I suppose. I actually like some of these paintings, especially the animals and so I have taken a sharp knife to them and carefully cut them from the stretchers.

I have decided to store these in a large folder the rest will destroyed; and b) work done on linen canvases I don’t think are up the mark. I wont show these to anyone. Again I will cut the canvases from the stretcher to keep the wooden frames to reuse with a fresh canvas. The canvases will be cut up and thrown away. If I had a large garden I’d burn them.

I have tried reusing canvases in the past by sanding them down and painting gesso on them but I am never really happy with the result. I use paint too finely. i like a smooth surface. This is a luxury. In his early days as an impoverished artist, Picasso would often paint over pictures he thought unsuccessful because he didn’t have the money to buy a fresh canvas.

It is important to conduct the destruction in private so no one can make you feel bad about it. I have found the process quite cleansing. I did not realise that every time I looked around my crowded studio and glimpse the edges of an unsuccessful painting that it brought me down. They reminded me of my failures. That I was a lousy artist. Out comes my imposter syndrome! Ironically, if an artist sells a lot of work, they have little evidence of their successes around them.

I think that most artists have to come to terms with destroying work that isn’t up to the mark. One of two duff paintings can make all the others look bad. It’s sometimes difficult to decide as many artists develop their style, improve their technique, or just explore new themes so their earlier works can seem at odds with their later stuff.  How to decide if it is bad or just different? Lucien Freud is an excellent example of an artist whose style changed significantly throughout his career as he found his own style of painting.

I once went to an exhibition of Cezanne’s early work In Paris and decided, that with the exception of the House of the Hanged Man, most of it should have been burnt. We know that Cezanne burnt his poorer work so it must have been really, really bad! We are best not seeing it.

Likewise, Vincent Van Gogh should have burnt more. Before he discovered colour and light in the south of France in 1888, he produced a lot of dark and miserable work that no one wanted to buy. Yes, its interesting to see his journey as an artist, but I don’t think the world would have many of these early brown works if he’d burnt them.

Claude Monet was prolific. He painted around 250 “Water Lily” paintings over the last three decades of his life—but originally, there were many more. Before an exhibition of the paintings in 1908, Monet destroyed a group of them with a knife and a paintbrush, disappointed by their quality in comparison to “better” canvases. Time magazine called this a “rage of perfectionism”.

Monet was at this time struggling with his eyesight and was diagnosed with cataracts in 1912. Over the next decade, both his vision decreased progressively as well as his colour perception. Monet had surgery in 1923. He recovered excellent near vision and reasonable distance vision in the affected eye, but he complained bitterly about the world appearing too yellow or sometimes too blue. It took almost two years before he finally told friends that his color vision felt normal. After his surgery, Monet destroyed many canvases, maybe as many as thirty of them. I can only imagine his rage as I saw these substandard works.

Francis Bacon also frequently destroyed work he was not happy with. He worked on the Screaming Pope paintings for about 20 years and some of them turned up as recycled canvas which had been used by an amateur painter, Lewis Todd. When these scraps were discovered the Todd paintings shot up in value. They are still on the lookout for a pope’s screaming head! Below Todd’s paintings (left) Bacon’s scraps (right)

Francis Bacon was not at all thorough about destroying his work. In 2007 a group of damaged Bacon paintings was found in a skip outside the artist’s London studio by electrician Mac Robertson. He sold them.

Georgia O’Keeffe, was another painter, like Monet, who had difficulties with her sight, and who destroyed her own work. Her decision to destroy work was also about keeping her reputation strong. Curation.

She had been diagnosed with macular degeneration in 1964 at the age of 77, and by 1972, her vision had fallen below 20/200 despite attempts at laser treatment, and towards the end of the 1970s she gave up painting altogether. In the 1980s “she wanted to go into storage to destroy some of the paintings that she didn’t think were at her level,”  Some allegedly destroyed works have apparently slipped through the cracks.

Red and Green II (1916), one of her first watercolors, is listed in her notebooks as having been destroyed after she showed it once in 1958 at New York’s Downtown Gallery. Yet the work surfaced in a Christie’s New York American Art sale in November 2015.

Some conceptual artists have made a career out of destruction but that’s not what I am talking about here. I am talking about Monet’s “rage of perfection”. It is not vandalism if its your own creation. Sometimes, after a distance of months or even years, you can see your creations clearly. I once only “saw” a painting of mine clearly as it was leaving the room in a collector’s arms.  “Ah”, I thought “That’s a lovely painting”. It’s not always the way. Sometimes, I look at a painting from several years ago and wonder “What was I thinking?” I hadn’t been able to see it before then.

Being able to let go and destroy work is a sign of emotional health. I am not doing so well as many of these paintings were done over a decade ago. I don’t think Edward Munch, who suffered from terrible anxiety exacerbated by excessive drinking, could let go of many of his paintings let alone destroy them.

He was in the position that he did not need to sell his work and he ended up with a collection of almost all his art on the second floor of his house. He even called his paintings his “children”! In Self-portrait Between the Clock and the Bed, which he painted in the years just before his death, Munch seems crowded out by his “children” on the wall behind him. I think they should have been made to leave home!

Anyway, I digress. Artists and writers should be allowed to destroy early work, failures, something that was really only a first draft (Harper Lee), a work in progress or a cry for help (Edvard Munch’s Angry Dog, surely?). It’s not always easy to do. That first novel should stay in the locked drawer and those early paintings and sketches go into the bin. So those paintings of mine in lying in that folder may yet end up on a bonfire!

39 thoughts on “The Art of Destruction”