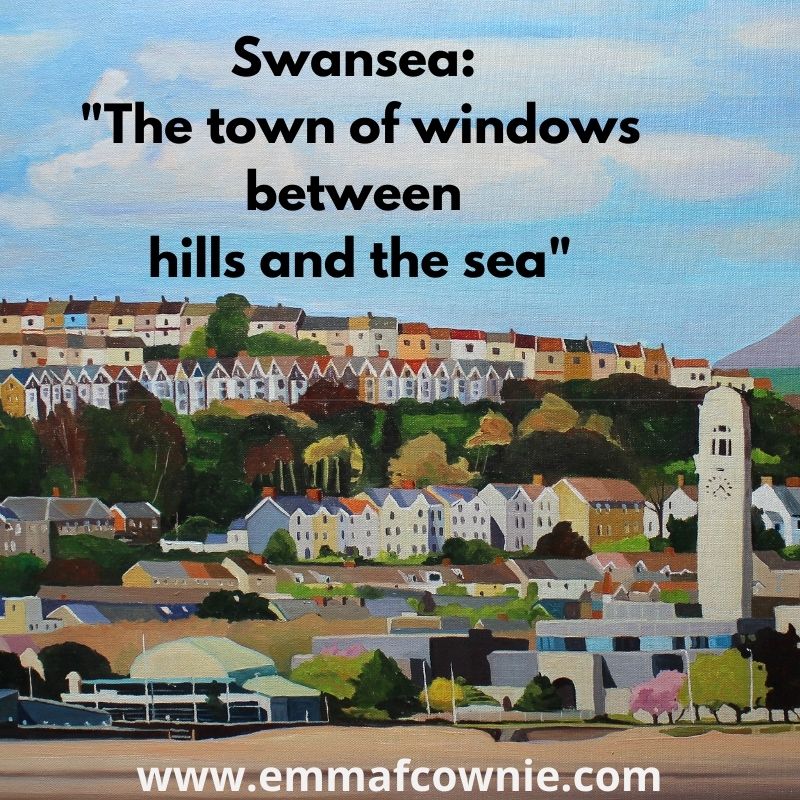 Dylan Thomas, the poet, grew up in Swansea and he descbed it as “An ugly, lovely town … crawling, sprawling … by the side of a long and splendid curving shore”.

About 5 years ago I went through a phase of painting a number of intricate paintings of Swansea. I loved the layers of Victorian and Edwardian houses with their high pitched roofs.  I went to great effort to walk out onto the quay and the beach to take photos with a zoom lens. The quay is no longer accessible, as part of the walkway has since collapsed.

I recently reworked a couple of these paintings that I still had.

I was recently commissioned to paint another painting from this series. The commissioned work would be similar, but the composition and the execution of the work would be slightly different. I had mixed feelings about the project because I knew how fiddly these paintings are. These paintings take a great deal of concentration!   I use a small brush for all the work on the buildings and they take several days of very focused effort to complete. Still, I hadn’t painted one for many years so I decided to paint one again. Perhaps it’s like a transatlantic flight, something that you can endure once a year but no more often than that. So here it is.

Still, for all my wingeing I can’t help but say that I was really pleased with the final painting. My head hurts from all that focusing on the small houses with their white gables and red chimneys. However, I did like thinking about the different places in the painting as I painted them. The perspective squeezes the buildings together in a way and makes them look closer to each other in a way they are not in real life, by that I mean, on the ground.

On the far right of the painting, on the beach, is what used to be the 360 Café and is now called The Secret. Next to that is the green building know as the Patti Pavilion, the trees behind it belong to the beautiful Victoria Park. They look so close to each other but in reality, the Patti Pavilion is on the other side of the busy Oystermouth Road.

The square building that stretches across the rest of the painting is the Guildhall, which contains the beautiful panels painted by Frank Brangwyn. Rising up behind these buildings is are the parts of Swansea known as Sandfields, Brynmill, and Townhill.

Once upon a time, they were villages or rolling farmland, but now they are all merged into the sprawling City of Swansea.  As Dylan Thomas aptly described it “The town of windows between hills and the sea.” On rainy days the clouds descend on Townhill and it can no longer see or be seen!

I am now working on a medium-sized much “looser” Donegal landscape painting, before making a start on two more commissions.

You can now buy a print of this painting here. Click on “reproductions” tab to see your options.

To follow in Dylan Thomas’s footsteps you can visit his favourite places around Swansea:-

18 thoughts on “Swansea: “The town of windows between hills and the sea””