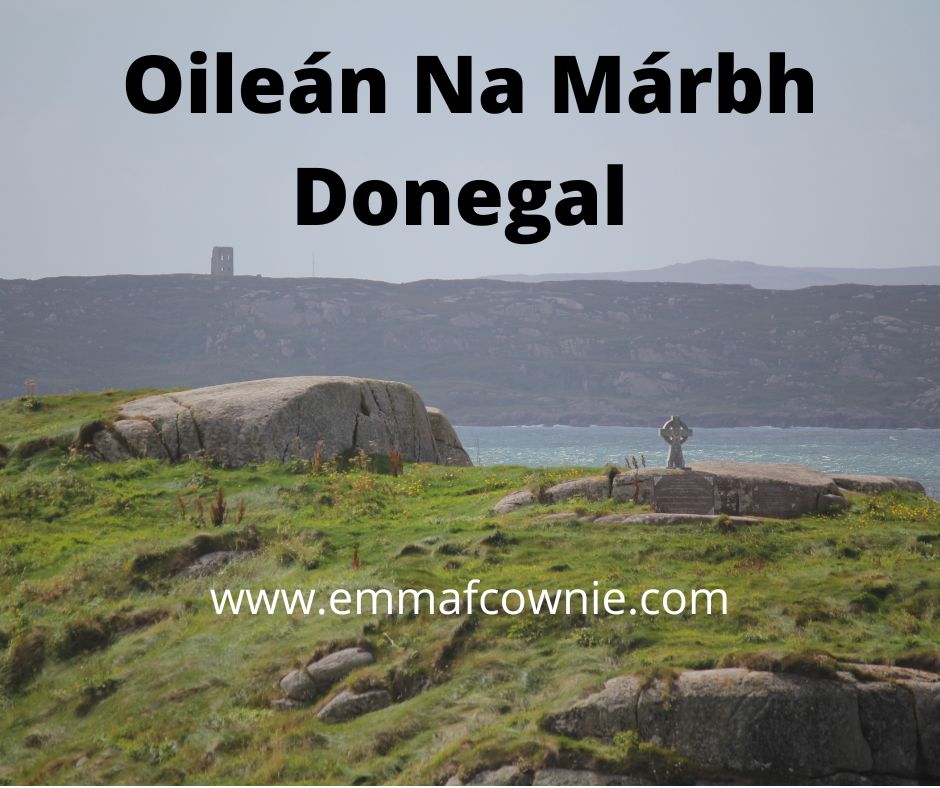 Some places cannot be found on google maps. Sometimes you have to get out an old fashioned paper map and look for yourself. I have a small collection of Ordnance Survey “Discovery Series” maps of North-West Ireland. I spend a lot of time looking at them and familarizing myself with an unfamilar landscape. Up until last year, I spent more than half of my life in Wales,  and I have so much to learn about Irish Geography and History.  My favourite map is number 1. Where I am right now.

I have noticed that there are a lot of “Tramore” beaches in Donegal, – its probaly not that surprising that it means “Big Beach” in Irish. There’s a Tramore beach opposite Dunmore Strand at the north end of the peninsula they build Donegal Airport on. Just to the north of the long beach that lies to the west of the runway, there’s a tiny island that can be reached at low tide. It’s called Oileán na Marbh, Isle of the Dead. I was intrigued. So we went to visit yesterday, on a blustery day.

It is a poignant island on the edge of the land; it is in a windswept and wild place. In accessible at high tide. Both beautiful and very sad. For it was on this island that over 500 stillborn and unbaptised babies were burried between the time of the Great Famine in the 1840s, and 1912. For centuries, until 2007, it was taught by the Catholic Church (and also by the Anglican Church) that unbaptised babies did not go to heaven when they died, but to a place called “Limbo”, and therefore could not be buried in consecrated church land. In other communities it was common to bury these unbaptised mites on the outside of churchyard walls, or in even farmer’s fields. In this part of Donegal, however, this island, served as the final resting place; in limbo between the watery world and the mainland. It was also where the local community buried the bodies of sailors that would sometimes get washed up on their shores.

Today, it is a popular spot for wild swimmers and campers. And yes, in case you are wondering, the sea really is that incredible shade of blue. In the distance you can see the islands of Gola (to the right) and Inisfree Lower, and behind that, Owey (to the left). A truly liminal space on the margins of the physical and spiritual world.