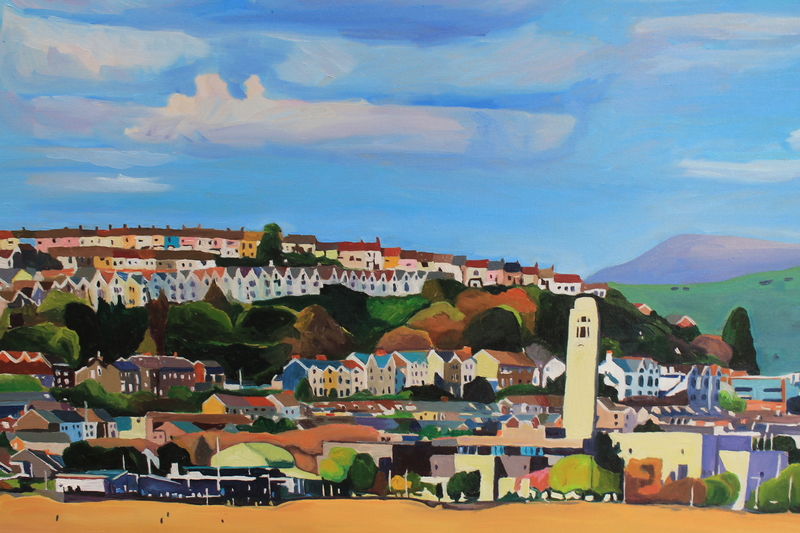 This is a new “naive” style oil painting “Swansea from Mumbles” 80 x 60cm £435 –
This is a rarely seen view of Swansea town centre and surrounds as seen through a telescopic lens from the beach at Mumbles – I loved this viewed when I first saw it, especially as one can see The Black Mountain (in the Brecon Beacons National Park) in the distant background.

This painting shows me why I love Swansea and South Wales. With all the huddled up houses hanging onto hills and valleys and sliding down to the sand of Swansea Bay. It is like the Valleys of South Wales are transplanted to the seaside. As a result this view almost has a slight incongruity to it.

It is as if, in a child like manner, two of my favourite aspects of Wales have been sandwiched together, the glorious coastline and the beautifully sculpted valleys in one view. Best of both worlds. For me this makes Swansea the heart of and gateway to South West and West Wales. A transition physically and geologically from the Valleys to the breathtaking coastline that lies around the corner of Mumbles and all the way up West Wales to the jutting rugged glory of the North Wales coastline. I love this part of the world. It is so beautiful and inspiring. 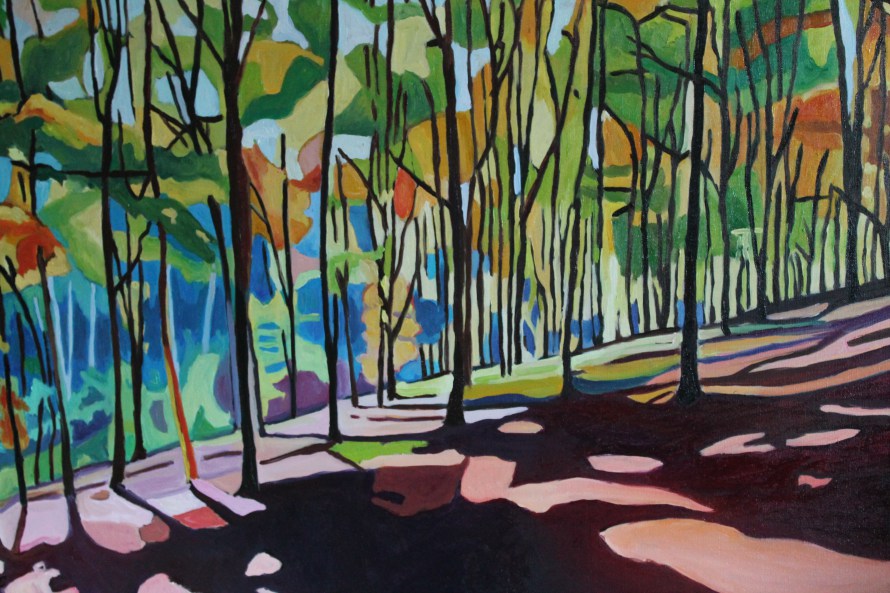 This is another refractionist painting – I was drawn to this painting because I love the colours that come alive not only in misty backgrounds but in backgrounds in the sun, viewed from the more darkened interiors of the wood as in this painting. I love the cool blue of the distance trees and the purple mingling with the ground and the purples there sliding across the ground, following the sun’s light into the dark of the wood. I love the spectrum of colours in the light and how the light is refracted by the tips of the trees, the last burnished leaves and the spindly branches. It produces a kaleidoscopic effect of colour.

“This is another ‘refractionist’ painting and is almost an inverse of ‘Up Cwmdonkin’. Instead of the refracted light creating a stain glass effect falling on the outside fringes of a wood, here it illuminates within the hidden chamber of a forest, which gives it a heightened, magical or enchanted feel. It feels like a secret wood of childhood fantasy and imagination. I like how the brilliant rainbow colours contrast with the jet black and how the inner sanctum of light is framed naturally by the surrounding trees, inviting one into the shower of light and colour.

But is this scene too good to be true? Is there a Brothers Grimm malevolence here, in this painting? Do the black trees signal a menace, a foreboding or do these encircling trees call one into a place of wonder and a child-like joy, where the light and colour, silence and peace rain down and let the soul rejoice? Or is it a broody chimera? Depends on your own imagination, I suppose!”

I have been asked a lot recently about  the techniques I employ in  my art and will discuss these in more detail in other blogs but below are now summarised accounts on how I treat light and colour at present in my work.

Use of light – In my paintings the effect of light is often ‘heightened’ and similar to the sophisticated, precise ‘Pixar’ like animated light. I seek to paint the ‘experience’ of light on colour and form. To achieve this requires the heightening of the effect of light otherwise light can often be dampened or subdued by the absorbing colours. I am much more interested in how light invigorates, resonates, generates or dare I say it animates colour and form, rather than simply dressing it, licking or caressing it. This effect is underscored by my use of drawing lines around colours and form, as with the fauvists, and others have suggested this too gives off an animated feel or quality. I also appreciate this observation as I want colour to be the product of being generated, animated by light as if light was the genesis of colour. Thus light creates the colour in a sense rather than colour simply being illuminated by it.

Use of colour –  I use a technique I have named  ’refractionist’ as it is a ‘stain glass window’ effect of breaking down the light into different colours in the similar way light is ‘broken’ into separate colours in a spectrum. A spectral effect would also be apt. It is about breaking down the effect of light, usually sunlight, on colour into ‘component’ pieces of colour. First one has to find a suitable photographed image and then this image has to be deconstructed into combined segments of colour and light. The style is also difficult as it is almost as if I am painting a pre-perceptual stage of vision itself. By this I mean, that it is similar to the pre-construction phase that is said to occur when we actually construct perception, as perception is constructed and not an automatic process. So in looking at this painting our brain can both enjoy the painting and also ‘construct’ our own image.