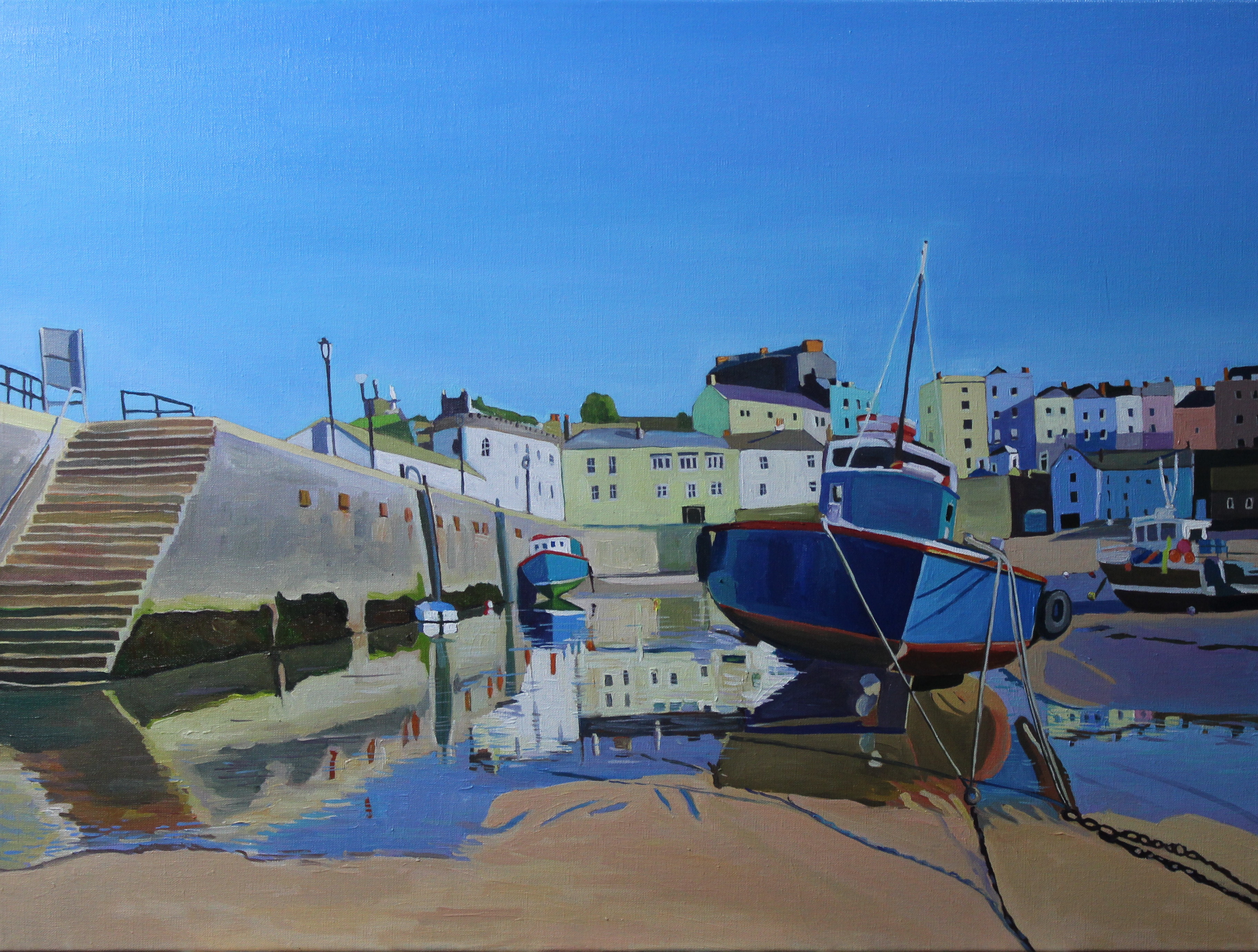 Before I visited Tenby, on the Pembroke coast, I had this vague idea that it was something like Barry Island, on the Glamorgan coast near Cardiff. If you have never heard of Barry Island, it was a Victorian holiday destination for day trippers from Cardiff and the South Wales Valleys. It had a “Pleasure Park” with rides and lots of shops selling rock and candy floss and it also had a Butlins holiday camp but the rides and the holiday camp are long gone now. It has a nice beach but its not as popular as it used to be.

Well, Tenby is nothing like that. It’s tasteful, historic, and enduringly popular.  I love Tenby’s real name. That is it’s Welsh name which is “Dinbych-y-pysgod” meaning fortlet of the fish. It still describes the old town well as as it’s solid town walls still survive as well as its harbour. Its a delightful place to visit with pretty Georgian houses and two large beaches.

Tenby has a special place in my heart because in the midst of my PTSD breakdown and recovery I painted a picture of Tenby harbour.

I was very emotionally fragile at the time and I really I enjoyed painting the pastel colours of the harbour buildings. I get a lot of pleasure from colour. Other people got pleasure from it too because it was one of the very first paintings I sold as a semi-professional artist. The collector who bought it later told me that she was going to redecorate her lounge to match the painting! I was so touched by this. I had so little confidence at the time that it meant a great deal to me. I also sold many prints this painting. As you can see I did many paintings of Tenby Harbour but I eventually moved on to other subject matters and different challenges. I particularly focused on people portraits closer to home in Swansea and paintings of Gower peninsula, closer to home.

So last month, I decided that Tenby was overdue a visit. I had been watching the weather forecast for weeks. Eventually the forecast was for a day of wall-to-wall sunshine.  The only problem was that it was very cold with a bitter wind. Never mind. I wrapped up well with thermals and two pairs of socks and got up early to catch the 7.50 train from Swansea to Tenby, arriving at 9.30.

I had set off early because I like to catch the morning light with its long shadows. I also wanted to see the harbour at high tide with the boats in the harbour. The only problem was that as soon as arrived at the harbour I could see the the sun was in the “wrong place” and most of the boats had been pulled ashore and covered up! The previous times I had visited Tenby was in the summer, later on in the day.

So, I had to wait. So did. I waited in the way I usually do, by moving. I walked and walked. In the end I walked around Tenby for 6  hours, taking photos of the shadows and the people. Despite it being mid winter it was the school mid term break in England (not in wales) and Tenby was full of families, wrapped up, despite the biting wind, and enjoying the sunshine.

I had chips for lunch watched by three beady-eyed seagulls and a chocolate ice-cream. I had to think about that as it was so cold but in the end I gave in had one – it was delicious.  I had intended to catch the 1.40 pm train back to Swansea but i could see that the light was changing and I knew that it was low tide at 4pm so I tried and waited some more. I walked up the habour walked and climbed half way down the steps to take photos of the four or so boats that were in the harbour. It was strange waiting for the tide and light because they eventually changed faster than I thought they would. All of a sudden the tide had retreated far enough for me to walk out into the harbour and take photos of the reflections. Bingo. This was what I was after.

And then, almost miraculously the tide revealed the sandbanks on the far side of the harbour, by the end of the harbour wall and I could gingerly climb down some seaweed-covered steps and see the harbour in it’s full glory. I don’t think I took off my fingerless gloves once in Tenby, and I did appreciate the heating on the little train back home. I just made the 4.40 pm train back to Swansea and get home in daylight.

My day in Tenby was all about patience and waiting for things beyond my control.  Looking at this, my most recent painting of Tenby harbour I can see how much my work has changed, and hopefully how much I have recovered from those incredibly difficult times back in 2012-13. The painting is much larger and calmer and more confident than any of those I painted before. Large paintings, almost by definition require confidence. The winter tones are less vivid than the summer ones, despite the bright winter sunshine. I will be back for the summer light.

18 thoughts on “Waiting for the Tide”