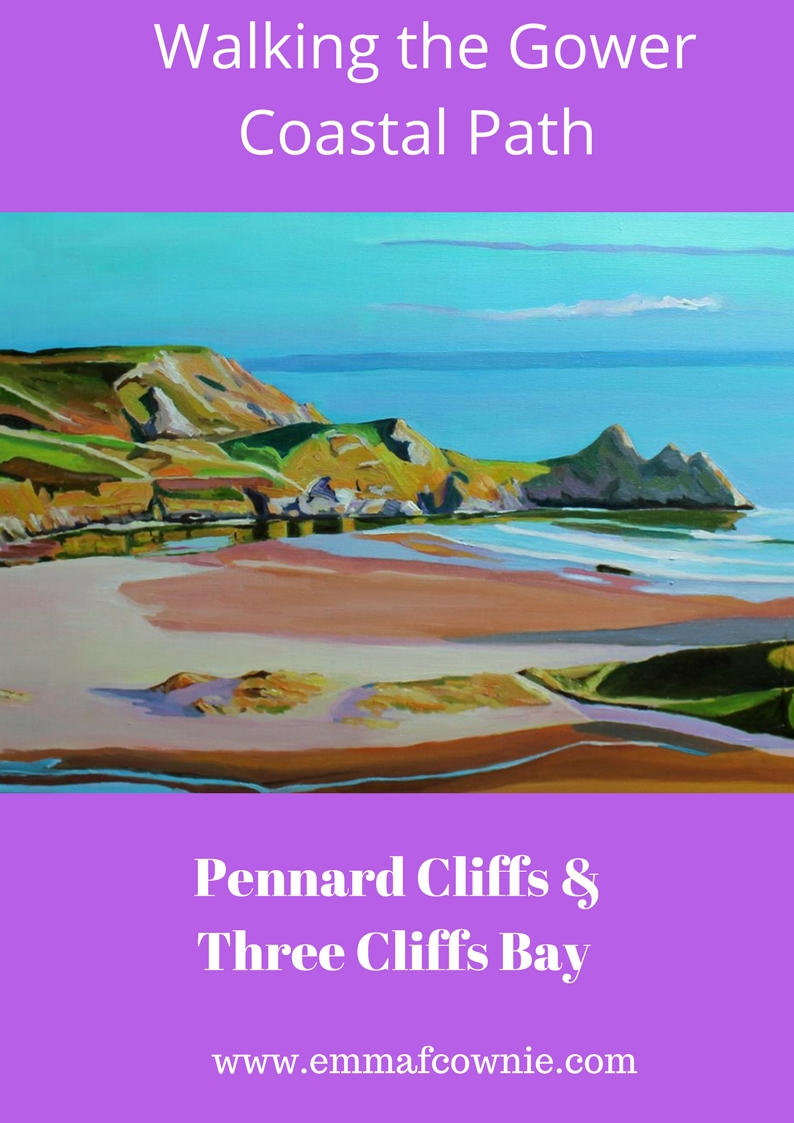 Three Cliffs Bay never fails to disappoint. It does not matter how many times I see it. The sight of it always causes an involuntary intake of breath; when I see it from the road, or from the slopes of Cefn Bryn (the long hill that stretches across the Gower Peninsula) or from Pennard Cliffs.

It is particularly spectacular at high tide in the morning light. It is probably the one beach I have visited most often and certainly painted most often, on the Gower coast. It is yet another beach that requires a bit of a walk to get there. There many different routes you can use. I am going to talk about the route I took on this journey along Pennard Cliffs. The village of Pennard lies a short distance to the north of High Pennard, rather confusingly, its the well-heeled village of Southgate that actually skirts the limestone cliffs of Three Cliffs Bay. The bus from Swansea stops at West Cliff, next to a coffee shop, restaurant and shop-cum-post-office. There is also a sizable National Trust Car Park. For years I have parked my car in the car park and walked west to Pobbles Bay and the spectacular views of Three Cliffs, never realising that I was missing a gem, just a bit to the left of the car park.

It was only because I was walking along the coastal path, from Hunts Bay, that I came across it. The walk itself was relatively easy as the land was flat although covered in gorse bushes. I had thought this part of my walk would be relatively boring as I could not easily see over the cliff edge but I was accompanied by the wonderful rising song of skylarks. The gorse seemed to be home to many birds and flowers; blackbirds, larks, posies of primroses and the golden stars of the celandine (I think). I loved looking at all the wildlife. It was the presence of a bench that alerted me to the fact that there might be some worth looking at nearby. I hadn’t seen a wooden bench since Brandy Cove (there’s one above the bay). Looking at my map, I realised that I was at High Tor. I approached the cliff edge, with great caution is it very high and I do not like heights as my legs go wobbly. What a view! WOW. It was a wonderful panorama of Oxwich Head, Oxwich Bay, Tor Bay, Three Cliffs Bay, craggy limestone cliffs topped off by Cefn Bryn. I made many exclamations. I sat down to eat some sandwiches and drink in the fabulous view. How had I not seen this before?

I had missed this view because I had always been in a hurry to get to Three Cliffs Bay. What I usually do is hurry along the coastal path along the cliff tops. You pass many beautiful houses set back from the cliff edge on the right, envying their position/view.

There is a gravel road for much of the distance but that ends and then you are faced with a muddy footpath or an even muddier bridle path (path for horses and their riders). The path crosses grassy headland and many gorse bushes, with a golf course to the right.

Then you get your reward. Three Cliffs Bay. It is a wide split in the limestone cliffs, sliced open over thousands of years by the meandering stream, known as Pennard Pill. It takes its name from the three sea cliffs that jut out into the bay. I have painted this view many times over the years and my treatment of the scene has also changed.

The beach to the left of the three limestone peaks is called Pobbles Bay. At high tide, it is separated from the main beach but at low tide, you can reach it by foot along the sand.

This beach is popular with dog walkers, some of whom brave the waters here. I say “brave” because it can be very dangerous to swim at high tide, due to the strong rip currents.There are large warning signs on the other side of Three Cliffs Bay. Sadly, people have died swimming at Three Cliffs Bay; three in the past 4 years. Apparently, it is relatively safe at low and incoming tides.  Fortunately, there are full-time lifeguards at the main Three Cliffs beach during the Easter & Summer holidays and weekends in May and June. I am not sure I have ever gone in the sea here. I prefer Brandy Cove or Port Eynon.

The “Burrows” or sand dunes make for tiring walking but its worth the long climb to the ridge behind the three cliffs.

Depending on the condition the tide may be a long way out and you have a view of a vast stretch of pristine beach, and the snaking Pennard Pill stream feeding into the sea.

A High tide you have the excitement of the incoming sea waves.

The path sweeps around the cliffs tops back inland along an undulating path towards Pennard Castle.

Some time back in the Iron Age someone built a hill fort on the western cliffs above Pennard Pill. All there is left of that is a large circle of raised ground and a good view across the bay. When the Normans came here in the 11th, however, the Braose family decided that the east side (that’s the side closest to Southgate and the golf course) was a much better bet. So they invested in a modern stone castle and a new church here, at the end of the 13th century. Unfortunately, they had made an expensive mistake because the surrounding sand dunes rapidly smothered the site, and by 1400 it had been abandoned. Those Iron Age people clearly understood local topography better than the French invaders.

There is a story that this was the result of a fairies’ curse, which summoned a massive sandstorm to destroy the castle and church. The curse was apparently provoked by the shocking failure to allow the local fairies to dance at the lord’s wedding feast. Now, I do like a good fairy story but I cannot track down the source of this story so I suspect that it was shaggy dog story made up to explain why this stone castle was abandoned within a few generations of it being built. How much more convenient to blame the fairy folk, (after all, Fairy Hill is just down the road so the place must be crawling with the little people once upon a time) than poor building judgement!

This is where you can follow either the path along the edge of (another Gower) golf course and through the woods down to Parkmill or plunge down a long sandy path to the valley floor. There you can follow the stream to the sea and then cross it on a series of concrete stepping stones.

The path then climbs up another steep path into the wooded headland on which the aforementioned Iron Age fort lies.

There are great views across the bay here too.

The path continues on to Great Tor and Oxwich Bay but I will rest here a while longer and take in the view!