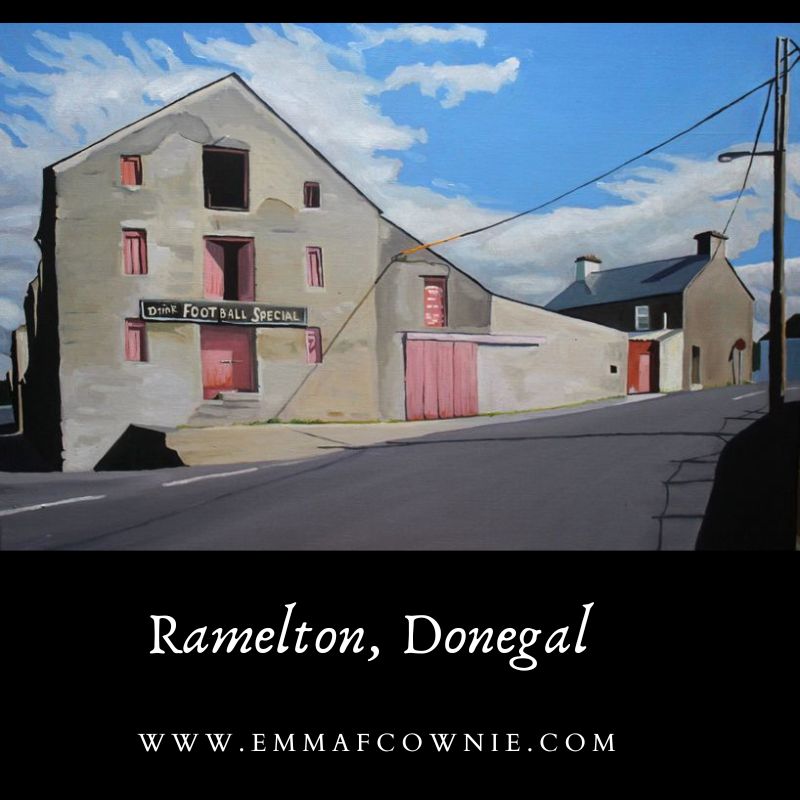 We visited Ramelton several times in this summer. It is a fascinating and historic town tucked away in the north-eastern corner of Donegal.  Ramelton, (Irish: Ráth Mealtain)  is also known as Rathmelton, this caused me great confusion when map reading.  Yes, we have a sat nav but I am an old-fashioned girl and I like the immediacy of the map book. I thought Ramelton and Rathmelton were two different places. It is also not too far from another village called Rathmullan. I got very confused. We also didn’t know how to say the name properly to ask directions; we put the emphasis on the first syllable “RAMelton” but it’s said “RamELton”, if you look at the Irish Ráth Mealtain (bearing in mind you don’t say “th”s in Irish) it makes more sense.

Ramelton is a pretty and interesting place to visit. We entered from the north end, over the narrow stone bridge that crosses the flat, slow-flowing River Lennon. There are many fine Georgian-era houses to look at.  The Mall runs along the south side of the river from the Bridge to Gamble’s Square. We enjoyed a very pleasant walk along the Mall towards the old buildings that form the Quays.

Further to the east lie the the Quays and the old warehouses, once commercial buildings, some of which are quite neglected, once formed the historic commercial centre of the town.

The town was founded in the early 1600s as a plantation settlement, on the site of an O’Donnell Castle by William Stewart of Ayrshire.  Stewart was professional soldier (in otherwords, a mercenary) who had fought for kings of Sweden and Denmark before coming to Ireland for James I (VI of Scotland). He built and gave his name to fortications at Fort Stewart and Newtownstewart. In 1623 he was made a baronet and granted the castle of Ramelton, becoming the biggest landowner in the town. He also gained valuable fishing rights on Lough Swilly.

The word plantation has a special meaning in Ireland. This may cause confusion for some North American readers. In the South States of the USA the term is used to mean a large farm. In Ulster, the northern most province of Ireland, however, the plantation was the mass conviscation of land from the  native Catholic Irish by the crown mainly under King James, from c.1609 onwards, and continued under Oliver Cromwell. The conviscated land was “settled” or colonised by Scots Protestants, like William Stewart’s followers.  In this sense Ramelton, was a town planned and “planted” by Scots and English settlers.

Ramelton was built where the River Lennon flows into Lough Swilly. We approached the town from the north, over the narrow stone bridge.  Unlike many other Irish towns, who seem to turn their backs to their rivers, Ramelton is focused on the River Lennon. In fact, the town is dominated by the wide flat river, with a good part of the  old town being built along its shore.

The location of the river helped the town develop into an important port and a prosperous centre for industry, trade and local government. In the 18th and 19th centuries Ramelton became the biggest linen bleaching town in County Donegal. Linen was a booming industry in Ulster. By the 1720s flax growing and linen weaving replaced food crops as the staples of Ulster agriculture. In the 18th century the domestic linen industry had expanded so rapidly that annual exports of linen cloth increased 40-fold! The peak period of flax cultivation was the decade of the 1860s (when there was a “cotton famine” in England) during which more than 200,000 acres were grown across Ireland. In the second half of the C19th Ulster produced at least ninety per cent of the national crop. Boats from all over the world docked in Ramelton to trade their wares in return for the Irish linen.

The flax for the linen was grown locally and then treated at the tanyard. Some of the linen was fed into voracious shirt-making industry based in nearby Derry City. The booming trade in linen for the export market helped provide much of the money needed to knock down old plantation houses and replace them with impressive new town houses. These spread westward and eventually grew into a riverside promenade lined by trees, known as The Mall.

Unfortunately, for Ramelton, there was a decline in the linen industry in the 1840s due to competition from Belfast. Although Belfast became firmly established as the linen capital of the world, the bulk of the raw material, however,  was no longer produced in Ulster but imported from Belgium and Russian the majority of its production was destined for export too.

In the 1850s the town decline began in earnest as as the port began to silt up although a steam boat would leave from Ramelton to Derry and on to the emigrant ships that left from Derry. Later a new railway line was built in Letterkenny in the early years of the 20th century. This all  contributed to the decline in industry in Ramelton. Its role as a centre for local government also ended with the abolition of the Grand Jury system in 1898.

The town is home to McDaid’s, a soft drinks manufacturer, whose drinks are sold throughout Donegal and further afield.  Its most famous drink is the Football Special which was originally produced to celebrate the successes of Swilly Rovers Football Club.

We ambled passed the end of the Quays and then looped around and  then past some very derelict buildings in sore need need of rescue, to walk back up Castle Street past the old centre of the town. The space which once formed the very centre of the town, is completely given over to a large tee-juntion and cars. Ramelton was also once a “Market Town” with a market cross, which signified the right to hold a market granted by the monarch, or local barony. In Ireland, market crosses were often located in a space, mid-way between church and castle. this was once the case at Ramelton but the market cross itself is long gone.

Postcards, drawings and numerous photographs from the 19th century show how prosperous and picturesque the setting of the town was. The town retained its importance as a rural business and market centre into the twentieth century.

At the beginning of the twentieth century, Ramelton had seven churches which is pretty impressive for such a small town. It was known as ‘The Holy City’ due to the religious diversity found in the town. These days there are just three churches. Crime writer Paul Charles, used this diversity as a backdrop for one of his Inspector Starrett detective novels “Dust of Death”.  which is based in Ramelton. I read this book, hoping to find out more about the town but apart from the odd mention of the Conway’s Bar and Bridge Bar, there was little background information.

We passed a very modest old end terrace cottage on Bridge Street in Ramelton, Donegal. We didn’t realise it at the time buy this the house where Patsy Gallacher (1891–1953) (also spelt Gallagher), Celtic legend, known as “the Mighty Atom” lived as a child. Patsy’s family were desperately poor, he had been born in the workhouse, and later they moved to Scotland.

On the north side of the river, Bridge End was developed around the large mill sites and bleaching green which is County Donegal’s largest surviving industrial heritage site associated with the linen trade. Although we passed Bridge End on the way into the town, we didn’t cross back over the river to visit this area. If I had known about the mills and bleaching green, I would have made the effort to see it. Next time we certainly will.

Most of the information about the History of Ramelton was taken from “Ramelton Action Plan for Donegal County Council” here  .

More about Ramelton here and Rathmelton here  (yes, it’s the same place but there are two entries)

Chapter on Flax in Ireland here

A History Of Irish Linen In 1 Minute

12 thoughts on “Ramelton, Donegal (The town with two names)”