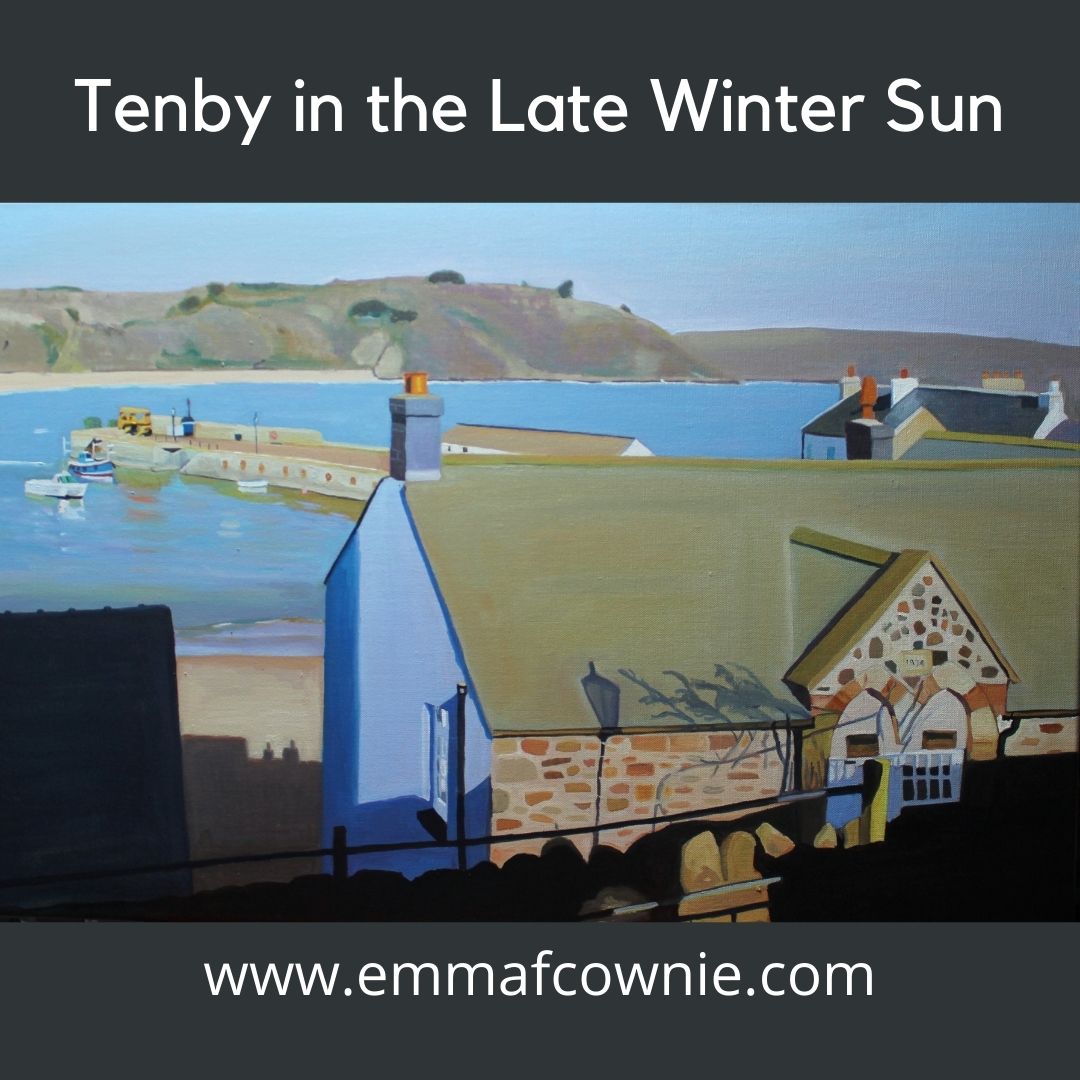 We are in the midst of lockdown in Wales, the schools are shut and the good news is that the covid numbers are falling. They need to fall a lot further because when the schools and the university students come back they will shoot up again.  I had in a mind a longer blog post, but I find that after I have got up, done my yoga/ankle exercises and painted in the morning light, that I am too tired for much else.  That post will have to wait a little longer.

So I have decided to show you my most recent work. I have been painting Tenby, which I can only visit in my imagination.Tenby is a harbour town and resort in southwest Wales. It’s known for its 13th-century town walls and its stretches of sandy shoreline, including Castle Beach.

I have been working on a triptych (which is three paintings) but I have only finished two of them, so its a diptych (two)! I will add the third one when I have completed it. I was trying to find unusual angles to paint. As much as I love painting Tenby and its colouful houses and boats, I need a fresh angle to present my brain with a new set of challenges to solve. This first painting, the challenge lay in how to paint the headland off in the distance and balnce it with the very dark shaows in the foreground. In the end I simplified the details and make sure that the tone was cool with warm grey and mauve.  I was particularly pleased with the shadows on the beach and the blue house.

My second painting is a view of the pier or quay from Castle Hill. This is a headland on which the ruins of Tenby Castle overlook the harbour. I liked the fact that this was the “underside” of the view we usually see of the harbour.  The pier is a working pier as can be seen from the lobster pots stacked at the far end. It’s also where the Caldey Island boat picks up supplies for the islanders and the abbey every day (so long as the wind is not from the South West or over 20mph). Apparently royal mail has continued to visit throughout the pandemic, so that the monastery shop has been able to continue to operate.  The boat that takes visitors to the island leaves from Castle Beach round the corner. The island is usually open from Easter to September for visitors, I don’t know whether that happended this year. A visit to Caldey in the boat was a pretty outdoor affair in ordinary times, so maybe they will start again in the summer, who knows.

I will add my third painting when I have completed it.

Update:Here’s the third and final painting of the three.

That’s me done with Tenby for a while!

About my visits to Tenby here

About I paint Tenby Harbour here 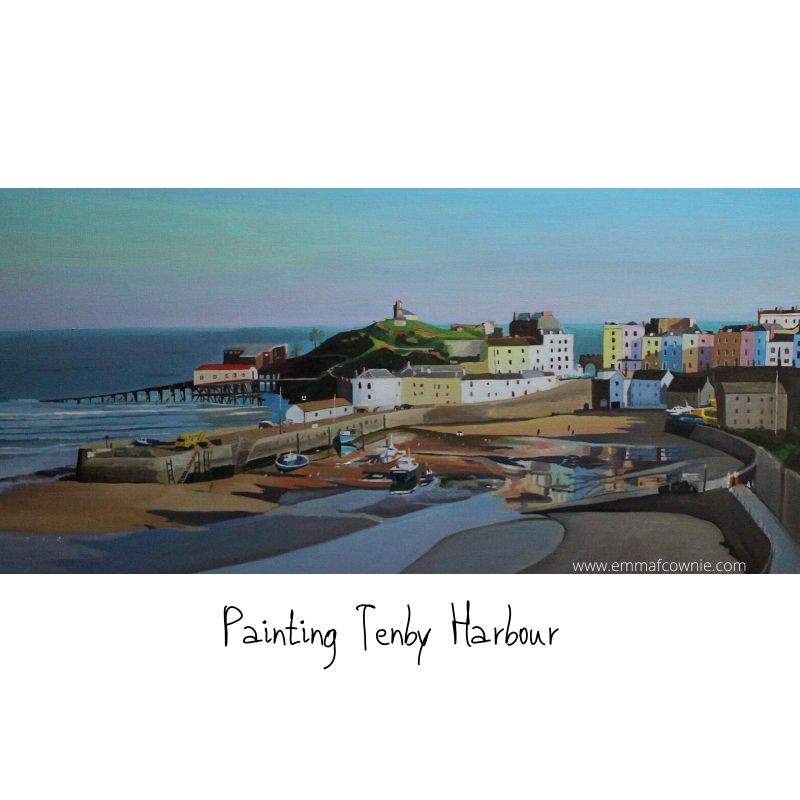 Close Up When I looked at the finished painting, I found pleasure in the curves of the harbour wall on the right side of the painting. As it was in shadow, I had not really paid it much attention before. You may recognise the lobster pots on the quayside to the right of the painting that were such a big feature in the first Tenby painting in this series. On the left, there is the tiny turquoise boat alongside the quay. This is the Mistress II, which was in “Hazy Tenby”.  That makes me smile. In a weird way, it reminds me of the many novels of Anthony Trollope in which he created a world in which a  person may be the central character in one book and a minor figure, who only gets a passing reference, in another. Once I have painted an object or person they become quite fixed in my memory, largely because I had studied them so closely. The lobster pots had their moment in “Early Morning Tenby” and tiny turquoise boat in “Hazy Tenby”, and now are supporting characters in “Tenby Panorama”.
51.672738-4.703579
Category: Tenby
Tags: Pembrokeshire, Paintings of boats, Landscape painter, Painter of Wales, Paintings of Tenby, Welsh Landscape Paintings, paintings for sale, Tenby paintings, Wales, painting of tenby, Welsh art, contemporary Welsh landscape painters, Tenby, modern landscape artist, Modern landscape art of Wales, Tenby Harbour, Boats
Subscribe to Blog via Email
Search Site
Search Blog
Recent Posts: Emma Cownie