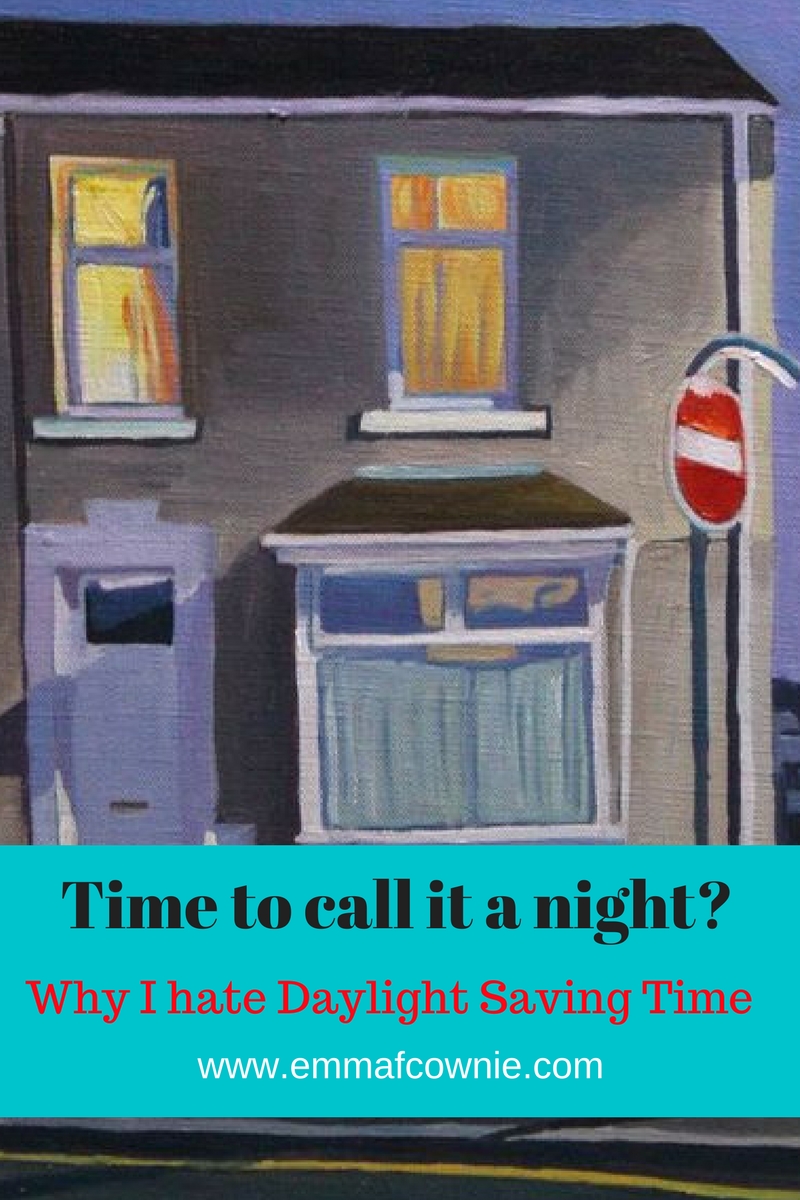 I woke up a bit earlier than I usually do this morning. It was just before dawn. The night was no longer inky black but had a bluish tinge to it. The light has been changing ever since. Now it is mauve. It will lighten until the light is pinkish, then finally white. Throughout the course of the winter I have been used to waking in the dark and waiting for the sun to rise. No so much recently. The days are lengthening noticeably. Instead  of night arriving unexpected at 4 o’clock it now holds off about tea time. This gradual lengthening of the day has a natural rhythm and logic.

The sudden arrival of British Summer Time (BST) or Daylight Saving Time (DST) when the clocks are turned forward an hour in late March does not. It feels like we are catapulted into the summer with more light than we know what to do with. I find it odd that I am sad at the arrival of BST because all that extra daylight means I can paint for longer. I should be happy. I am happy but the abrupt lengthening of the day feels  wrong. The “loss” of an hour is also tiring. It’s much worse in the autumn. Instead of easing into winter we are hurled into the darkness. Others feel this way too.

The EU is debating this right now. There have been calls for the European Commission to launch a “full evaluation” of the current system and come up with new plans, if necessary. In Europe, currently, EU law sets a common date in spring and autumn on which clocks must be put forward and back by one hour in all 28 member states. Supporters of the DST say it saves energy and reduces traffic accidents but critics argue it can cause long-term health problems and studies have generally failed to show significant energy savings associated with the shift.

They hate it in Finland. More than 70,000 Fins (out of 5.5 million) signed a petition asking the state to give up the practice. French MEP Karima Delli argued that moving clocks forward to summer time left people tired and led to increased accidents”Studies that show an increase in road accidents or sleep trouble during the time change must be taken seriously”, the French MEP said, adding that estimated energy savings were “not conclusive”. Belgian lawmaker Hilde Vautmans, however, said that changing daylight saving could mean either losing an hour of daylight every day for seven months in summer or sending children to school in the dark for five months over winter.

I was surprised that the USA also uses DST. I assumed that with so many time zones, nine, that they would not have wanted the added complication of DST.  It was introduced during the Second World War and most mainland states areas still have DST except Arizona (although the Navajo have DST on tribal lands). Many studies have been done in the US that show the negative effects of the biannual shift to DST. Losing that hour’s sleep in spring affects health; strokes and heart attacks are more likely, there are more traffic accidents and it affects relationships, tiredness causes more arguments.

Interestingly, one big country has tried life without DST. In 2011 Russia   (who have on less than 11 time zones in their massive country) first tried clocks on year-round summer time but that proved unpopular then in 2014 switched to permanent winter time or “standard time”. Russian MPs said permanent summer time had created stress and health problems, especially in northern Russia where mornings would remain darker for longer during the harsh winter months. However, I have yet to discover whether the return to permanent “winter time” is popular with the Russian people.

So if I want to avoid this biannual lurch forward and back in the day, I can move to Russia, Arizona or one of the other 70 countries that don’t bother with it including Japan, India, and China.