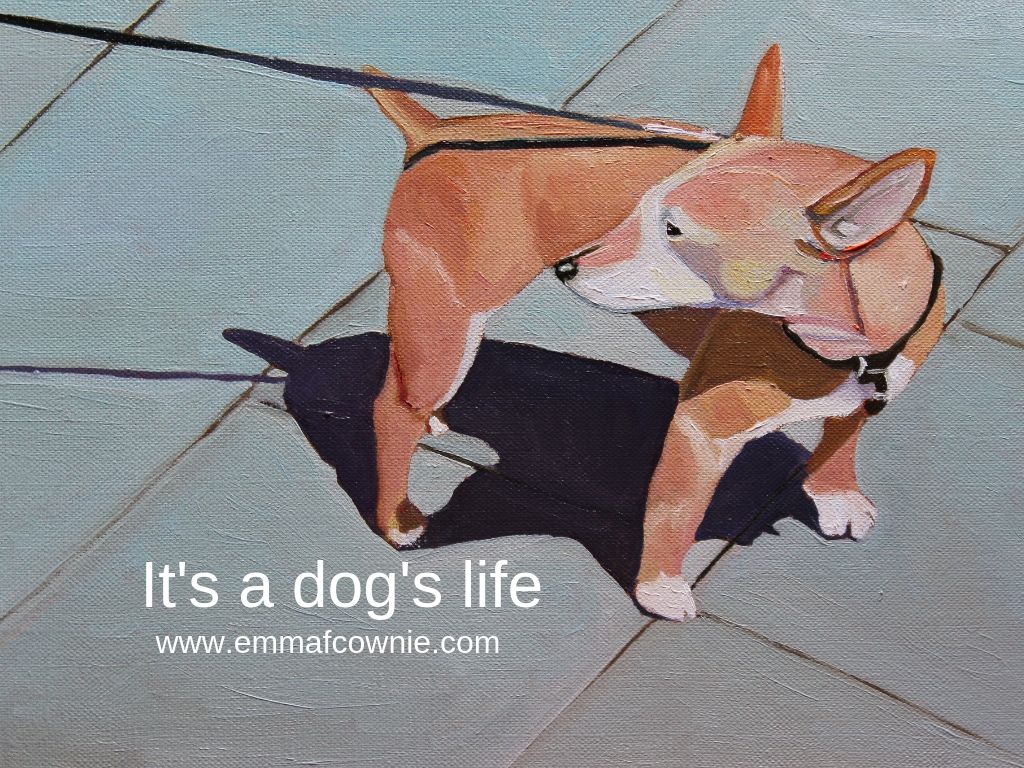 Just a footnote to my last post really about painting scenes at markets.

One of the small dogs spotted at Stroud a fortnight (2 weeks) ago. This tiny girl was waiting for her people to stop talking so she could carry on leading the way forward.

Apologies for the short post but I am having trouble typing for any length of time due to pain in my hands. A vigorous Yoga session a couple of months ago either sprained my wrists or set off something like arthritis, I am not sure. Anyway, I have had some sort of intermittent pain in my hands (the right one especially) for weeks now, but it’s particularly bad when I type or text! 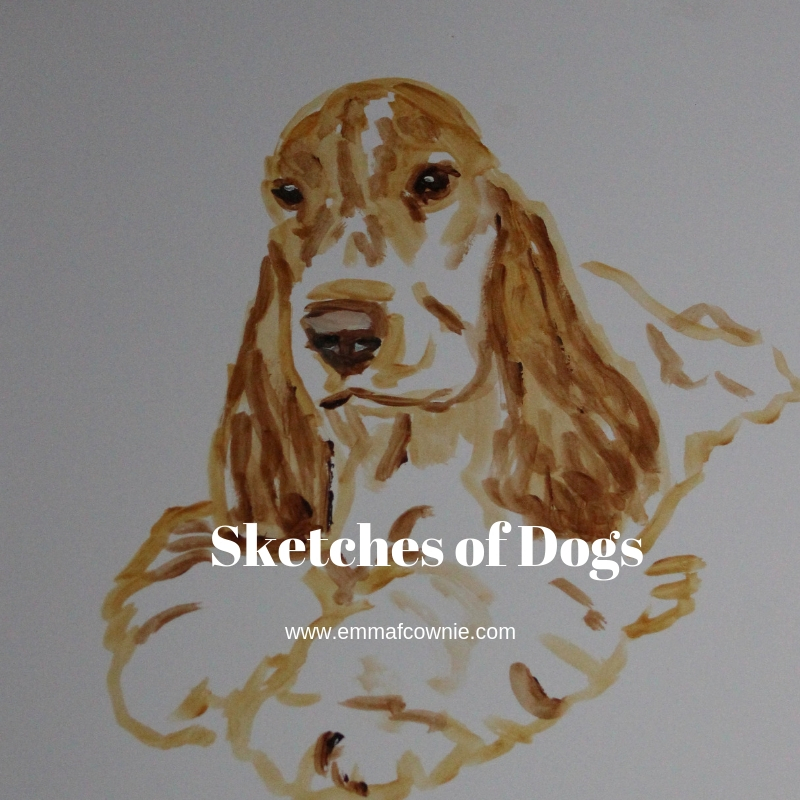 As a Christmas present, I promised I would paint my sister’s cocker spaniel, Dolly. I have a few photos of her but I thought my sister might prefer a painting based on an image she’d chosen.

My sister, however, gets distracted by all sorts of stuff, like the builders arriving to take down her lean-to shed and then having to deal with the junk that has accumulated in the said shed. In her defense, she’s inherited the contents. None of it is hers. There’s a fair bit of it.

Anyway, I am waiting for her to send me her chosen image.

“Dolly won’t sit still when I try and take a photo!”, my sister complains.

So I may be waiting a while!

So in the meantime, I have been practicing painting other people’s hounds. I like to do quick tonal acrylic sketches as a break from oil painting. It challenges to think about tonal value rather than colour. Sometimes, it get it right, sometimes I don’t.

I also did a sketch of Dolly from a photo my mother had sent me. It may be the one my sister ends up getting! 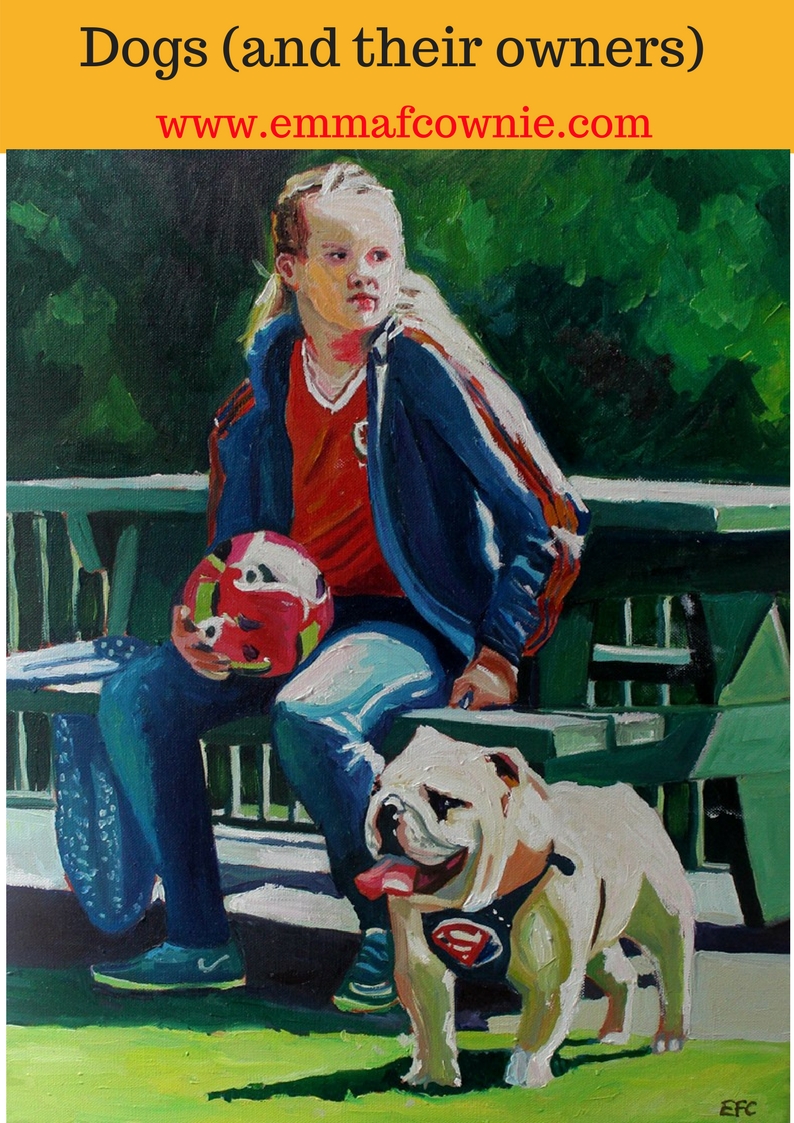 The people of Britain love their dogs. It is no secret that I love animals. I come from a family of animal lovers. My younger brother has three cockerpoo type dogs, my sister has a Cocker Spaniel called Dolly one and myself and my husband have two gorgeous mutts.

Animals can do no wrong in my family. I suspect that my mother would prefer to see photos of friends’ dogs rather than photos of their grandchildren!

So its no surprise that I often choose dogs (and their owners) as subjects for my art. I also love painting dogs as commission portraits.

I am not always terribly good at making eye contact with people when I am talking with them but when I am out walking, I will often catch the eye of a dog and a glance will pass between us. Perhaps, I am imagining this.

Dogs are cool. They live in the moment and know how to fully enjoy themselves. They love being out and about and enjoy seeing that. There is no joy like the joy of dog running free in the park or in the woods.

I like to try and see the world from their point of view. This usually means a low view point. Little Jack Russells are a favourite of mine. They have a big personality.

I particularly like to capture the body language between the dogs and and their humans. I am intrigued by the bond that links them. Even if they are just a dog and a human, they are a pack. The human is not always, “top dog”!

Do you have a favourite dog painting? 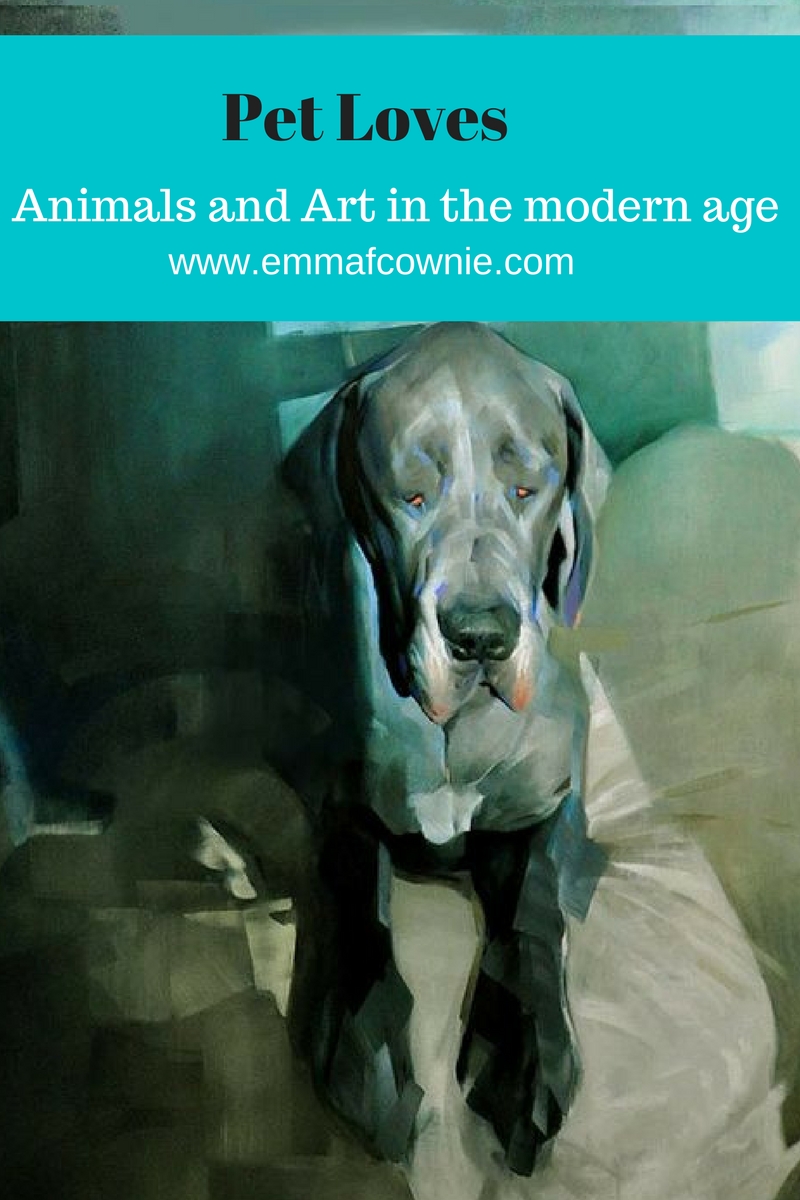