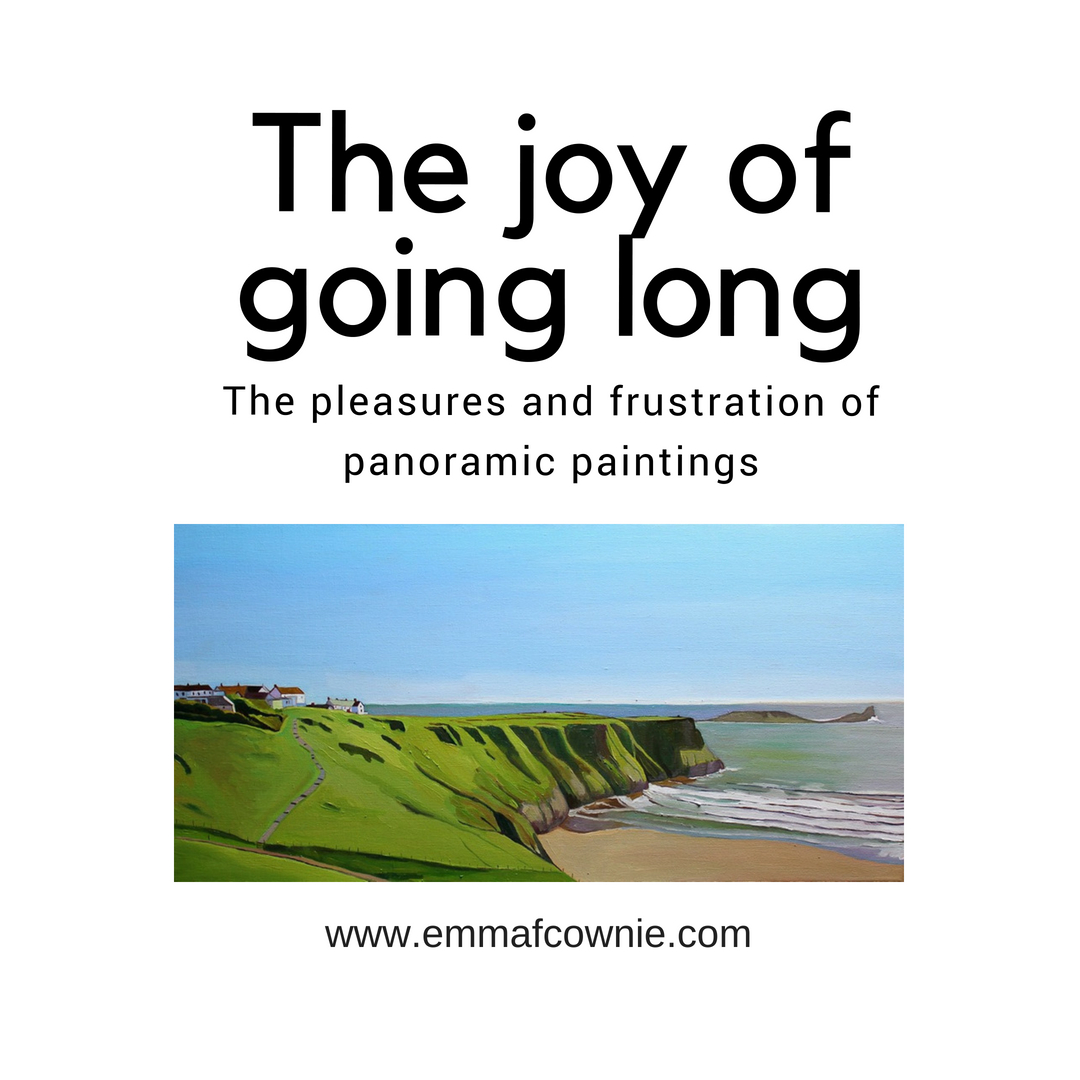 Who hasn’t attempted to create a photographic panorama? Back in the 1990s when cameras contained stuff called film, I remember often standing looking at some amazing view, and then slowly pivoting from left to right (and then right to left in case I’d missed something) taking a series of overlapping photographs.  The hope was that I would recreate a some stunning vista; such as the Grand Canyon, the London skyline, or even the lovely Alhambra. After a long wait, the photos would come back from the developers and I’d dutifully stick them together. The results were usually underwhelming.  Rather wonky. If, you tried really hard you could sum up the awe of the view that had inspired you, sort of. I don’t think the sticky tape added to the overall impact, either. I give you in evidence the example below which I found lurking in one of our crowded cupboards:-

Oh dear. Obviously I wasn’t the only one who was disappointed by their efforts to capture their holiday vistas in this way as companies like Kodac developed special disposable panoramic cameras so you did not have to tape your photos together. I will never know if they were any good because I never had one.

So, forgive me if I have pretty much spurned panoramic compositions until now. In fact, I have had a long phase where I chose portrait orientation for my landscape compositions whether rural or urban. I really liked the sense of piles of houses on houses, or field upon fields. It works well in hilly Swansea and mountainous Wales.

It’s not like I never tried narrow canvases. I did use a couple of small narrow canvases to paint Mumbles, the village at the end of Swansea Bay. The paintings turned out well but I didn’t really enjoy the experience. I didn’t really ask myself why  not until now. I think  it was partly because I was in a portrait orientation “groove” and partly it was because the canvases were too small, they felt mean and didn’t really convey the essence of Mumbles.

It was a client who got me using panoramic canvases again. He wanted a landscape painting of May Hill in Gloucestershire. We originally discussed using a 80x60cm canvas but then he decided he wanted a narrower canvas; 80×40 cm. This was inspired. This immediately improved the composition because instead of the landscape getting lost against too much sky, it actually balanced the composition. It gave the land in the painting more immediacy and intimacy.

Now, you might say that this is not particularly “panoramic” but it got me thinking. Narrower canvases would suit coastal paintings because too much sky often has the effect of “shrinking” the land/coast in a composition. I’ll give you a photographic example:-

So using a long narrow canvas works really well with compositions for certain scenes, such as the one of Worms Head I have shown above.

All good so far, but what about the frustrations? There are the logistical issues surrounding using longer canvases. It may sound daft, but they are long. I find it hard to store them in my small attic studio. They poke out. When it comes to painting, I found that painting of the far left or right of the canvas quite a challenge. You see, I don’t usually bother with using the clamp at the top of my easel when I am painting as I often like to rotate my paintings and paint a canvas “upside down” or even “sideways up/down”. Oh, no. I have to clamp my painting in place or else it flips away from me when I press on it to paint any part either side of the central part. Rotating the canvas becomes a hassle too. My arms are not quite long enough to adjust the clamp without standing up.

This may all sound very lazy but once I start painting I get into a groove or “flow” and can barely be bothered to move from my central position other than put my brush on my palette and then onto the canvas. This is why I usually end up drinking lukewarm tea even though it’s in a thermos-style travel mug. It’s very rare that I get up to change the station on my radio. This is how I end up listen to sports programs (even football matches) although I am definitely not a sports fan.

The satisfaction of a well-balanced composition and having less sky to paint is worth it.

Then comes the issue of how to show it on my website and social media. There is no problem uploading the image to artfinder.com – it comes up as a complete image on my page.

However, when I uploaded it to my website the thumbnail cropped the image (see below left).

So, I have to go on canva.com and create a new version of the image. I paste the image on a white background so the image will viewed whole. Thus:-

Finally, Instagram. I have the same issue with Instagram as I do with my own website in that it only shows part of the image so I decide to chop the picture into two halves and upload them separately. Only I do it the wrong way around at first and end up with a back to front image. I make a note (I draw a little diagram in fact) the right side has to uploaded first and the left second.

It looks better on my smart phone. But you see the problem, as new images are uploaded it is pushed along the feed and gets split up between the lines of images. I also don’t know if people looking say the left side of the painting will understand that it’s part of a pair. They’ll just think it a painting of a beach and won’t realise that there’s a long mountainous headland to go with it. *sigh*

Never mind, I think that the best way to show off the panoramic paintings is on this blog!

Here’s my most recent and ambitious long landscape painting. If you click on the title you can see a bigger version.