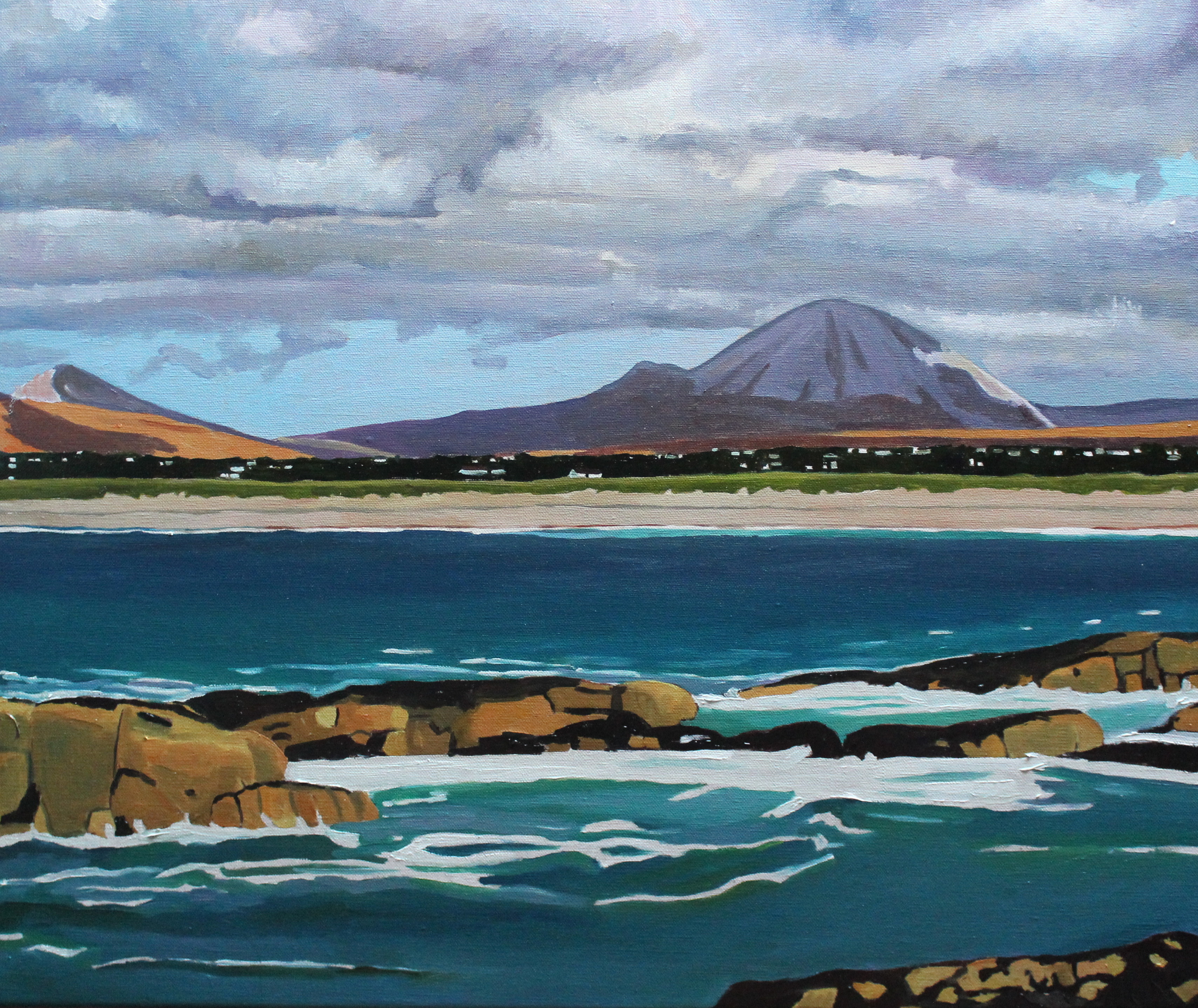 The night before last, I woke up in the dead of night, not sure if I was in Ireland or Wales.  It’s now five days since we returned from our week in Donegal, in the Republic of Ireland.

It’s taken that long to recover my energy levels. I hadn’t fully recovered from the virus that keeps coming back, and it was adrenaline that powered me round the place. I don’t get out much, to be honest, and everything was exciting to me; the airport in Cardiff  (on 4 hours sleep), the flight over Wales, looking down at our house, even the long wait in Dublin Airport for the connecting flight to Donegal was interesting. I hadn’t been to Dublin for years (and by years, I actually mean a couple of decades) and it had changed beyond recognition. I enjoyed watching how things are organised and how they connect (when I am not in charge of them, that is).

The final flight into Donegal airport was stunning. Most of Ireland is a patchwork of small green fields until just before you reach the approach to Carrickfinn Airport. Then the fields melt away to be replaced by an expanse of mountains and rusty red boglands.

Donegal is at the north-western corner of the Republic of Ireland. Facing out towards everything the Atlantic has to throw at it. It is very big, very beautiful and very empty. More people live in the city of Swansea (241,300), than in the whole of Donegal (158,755). Swansea is 380 km² and Donegal is 4,861 km². No wonder Swansea feels very crowded.

The stunning landscape is immediately apparent, but what took a little longer to dawn on me was just how really friendly and well-mannered people are. People wave and say hello when you pass them in the street, when crossing a road cars pause and stop to let you cross, when driving, its a battle of “who’s the politest” at junctions. When people stop for a chat, they chat for 20 minutes or even more.

I love driving around Donegal because the roads were pretty empty. I am not a fast driver, and wiggly roads without crash barriers are certainly not on my list of favourite things. Add a drop down a steep hill, and you have me driving at a snails’ pace. So what a joy it is to crawl along these hairy roads with no one behind my car. In fact, at Horn Head, I was getting nervous about sheer drops and bends so I pulled over and left my car to walk the last few  bends to the viewing point. No cars passed us, either the way up or on the way down. It was a joy.

I think I was happiest walking along the wind-swept beaches looking at the sea. The wind was always blowing. We quickly developed “Donegal-hair”, from the wind. My husband’s hair started to look that guy from the 1980s band Flock of Seagulls. On some beaches, the sand was almost white. I loved the Atlantic Ocean. It was a strong dark blue, but where the waves lifted, green showed through. The sea was so clear that the shallows, were green too.

One of my favourite beaches was Ballymanus, which is just round the corner from Carrickfinn Aiport. From the rocks you can see Mount Errigal, the highest peak in Donegal. It’s a curious dome-shaped mountain and looks like it should have been a volcano, but I don’t think that it was. In this painting I tried to capture the deep blue of the Atlantic and the ever-changing cloudscape. The colours of Donegal are very different to South Wales. There are more purples and greys and the light is cooler, less golden. Painting this picture has helped “embed” Donegal for me. It will be in my dreams for a while longer, I think.