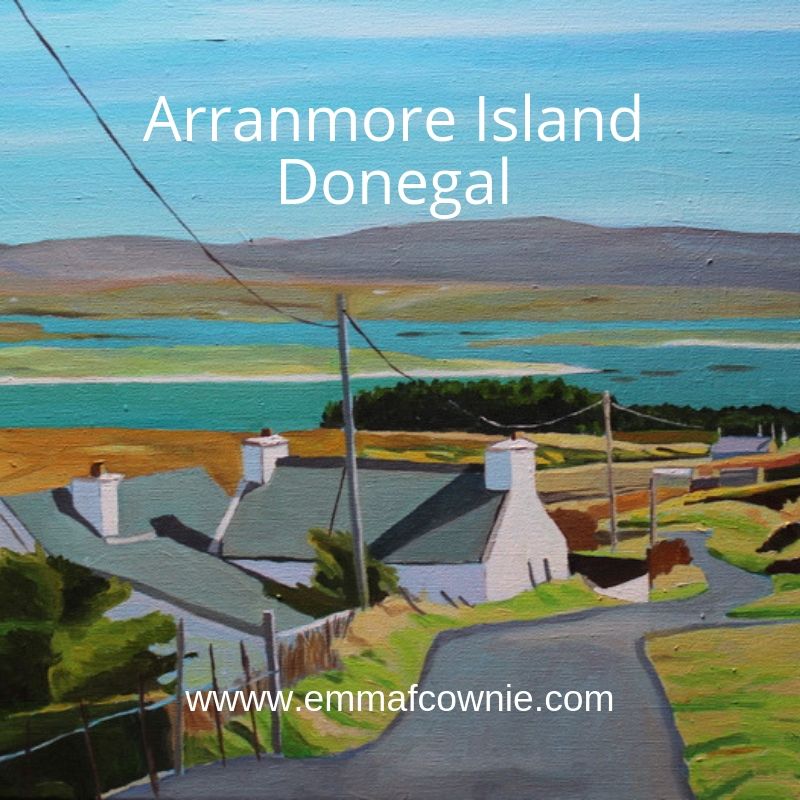 I have been back in Wales for three days now and the big difference from Donegal is the temperature and light. It is much warmer in Wales. Last week I was wearing a jumper – here I am in a T-shirt. In Wales, last night it was very dark by 10 pm. In Donegal, however, the light seemed unending. I struggled to sleep, despite being very tired, because although the sunset was after 10pm, it didn’t seem to get properly dark until after well after 11pm. Then it started to get light pretty soon after 4am!

I would sometimes wake in the early hours and look at the dark as a novelty. That’s something I’ve never done in Wales. Yet, I got used to this abundance of light. I made me feel active. With no television to slump in front of, I would find myself doing things after tea, such as the evening I found myself sanding a table at 9pm. I got used to life without news on the radio, although I did listen to some podcasts I had downloaded before I left Wales.

The day we visited Arranmore Island was a sunny Saturday. No jumper, just a shirt. There are two ferry companies that operate from Burtonport Harbour, the Red, and the Blue. They run all year round. In the summer months, they put on extra sailings. We plan to catch the 12.30 ferry, which is the Red Ferry. That’s the favourite colour of Seamas, my husband’s, beloved football team, Liverpool, so he’s happy. The ferry is very busy. It’s delayed by 10 minutes as the last car fills the boat to capacity. There are lots of teenagers and families on board. We stand by the rails as all the seats are taken.

The journey to Arranmore is always a treat. The ferry is speedy.  It takes not much more than 15 minutes to complete the three-mile journey. I love looking at the islands (and their houses) that lie alongside the route.

Rutland Island is one of the largest of these and lies to the west. There are some very beautiful modern houses on Rutland, alongside ruins which date from the 18th century. These were part of the planned settlement built by William Burton Conyngham. He also owned Arranmore Island.  In my painting “From Ferry Coll” (below) you can see the remains of the fish landing and processing complex on the left side of the painting. There was also once a post office, houses, and a school-house here.

On the eastern side, lies the islands of Edernish, Inishchoo, and Eighter.  Here there are old cottages tucked in amongst the rocks. There is sparkling sunshine, but once we leave the shelter of the islands, the sea becomes quite choppy.

Arranmore is well worth visiting. It is the second-largest Irish island (the largest is Achill, in County Mayo, if you want to know). It is seven square miles in size and it is dominated by an imposing hill called Cnoc an Iolair (“Hill of the Eagle”, 750 feet) which can be seen from most of the coast of Gweedore ad the Rosses. It has both sandy beaches along the south coast (three of them) and imposing sea cliffs (120 meters) along the west and north side of the island. Many of the islanders are native Irish speakers.

Many islanders used to support themselves through fishing, wild salmon in particular, but in 2006 the EU banned salmon fishing. This has caused a great deal of hardship and anger. It has also meant that many of the young people have been forced to move away in search of work, so the population of the island is dwindling and aging. You can watch a beautiful short film, “A Foot of Turf” about island life here.

Fortunately, the island has recently undergone huge technological advancement and has become the recipient of Ireland’s very first offshore digital hub. In celebration they wrote an open letter to American and Australia, hoping to entice new businesses to the island. Sadly, the story went viral and got distorted in the process. British tabloids, in particular, decided to reframe the story as the island being desperate for immigrants, “begging US citizens to move there” and decided to be offended that they “forgot” to invite British people, writing headlines like: “Anyone but the English”. This caused a great deal of distress on the island as this wasn’t what was intended at all. The letter was meant to appeal to American businesses to help boost the economy by giving islanders jobs – and visit the island.

So we are visiting the island. First, we made our way eastwards, towards the lifeboat station. We then backtracked and walk up the road past The Glen Hotel, which was the island’s first hotel in 1928. It was once the home of John Stoupe Charley, a Protestant from Antrim, who bought the island in 1855.

It was a long hilly road with a beautiful view across to the mainland. There were many old cottages and outbuildings here. The road was generally quiet but we were periodically passed by several cars. I like to take note of where cars are from, in Ireland registration plates in include letters to denote the county of registration. There were many with “DL” Donegal plates, but also plenty with “D” Dublin and Northern Ireland plates. Although I’d seen plenty of German and Dutch vehicles driving along the Wild Atlantic Way (past our house) there were none on this stretch of Arranmore road.

It’s considered good manners in Donegal (and elsewhere, of course) for the driver and pedestrian to acknowledge each other when the car has to slow to pass and the pedestrian has to clamber into the grassy verge. In Donegal, the driver will lift the index finger of his right hand. The pedestrian will similarly lift his or her finger but not necessarily raising the hand to do so. Smiles will be exchanged too. Nothing to exuberant, but friendly. It’s rare that this doesn’t happen, sadly it does on occasion and then it is followed by a short discussion between Seamas and myself about the drivers of particular makes of cars and/or people from NI/Dublin/hirecars.

We get so far and decide to retrace our tracks and walk in a big loop along the west side of the island, which provides us with sweeping views across to Burtonport and Dungloe.  If you look carefully in the photo below you will be able to see the old courthouse to the right. This was built at Fal an Ghabhann (Fallagowan) around 1855.

Eventually, the road wound downhill. We could hear the sound of singing on the wind. A choir singing? We eventually came to a large white Community Hall, the doors were open and inside were lots of young people singing in Irish. These were some of the hundreds of teenagers who come to the island as part of a summer scheme to learn and improve on their Irish language skills.

As if to reinforce this, a tall teenage boy passes us and greets us in Irish. Seamas manages a greeting but then tells me that the lad had used a different form of words to the one he’d learned over 30 years ago. It seems that the Irish language is very similar to the Welsh, in that it has many regional variations in terms of accent, pronunciation, and words used.

We finally made it back to the harbour and had two delicious cheese paninis in the sandwich shop.

The journey back to Burtonport harbour on the Red ferry was very enjoyable, with the passengers still in a buoyant holiday mood, waving at the passengers on the Blue ferry as we passed. A holiday maker’s car alarm kept going off. His embarrassment levels pretty much matched that of his children’s amusement.

I kept a lookout for dolphins or seals but saw none. Only sea birds. An American told me that he’s seen Minke Whales in Clew Bay recently. We had seen dolphin on the way back from Tory island. He had a theory that there was a bumper crop of fish 8 miles out at sea, which was where the wildlife were. Usually, the waters around Burtonport would have plenty of seals and dolphins. That’s something to look forward to seeing another time.

For more on Arranmore and other Donegal islands in general doub;e click on the link