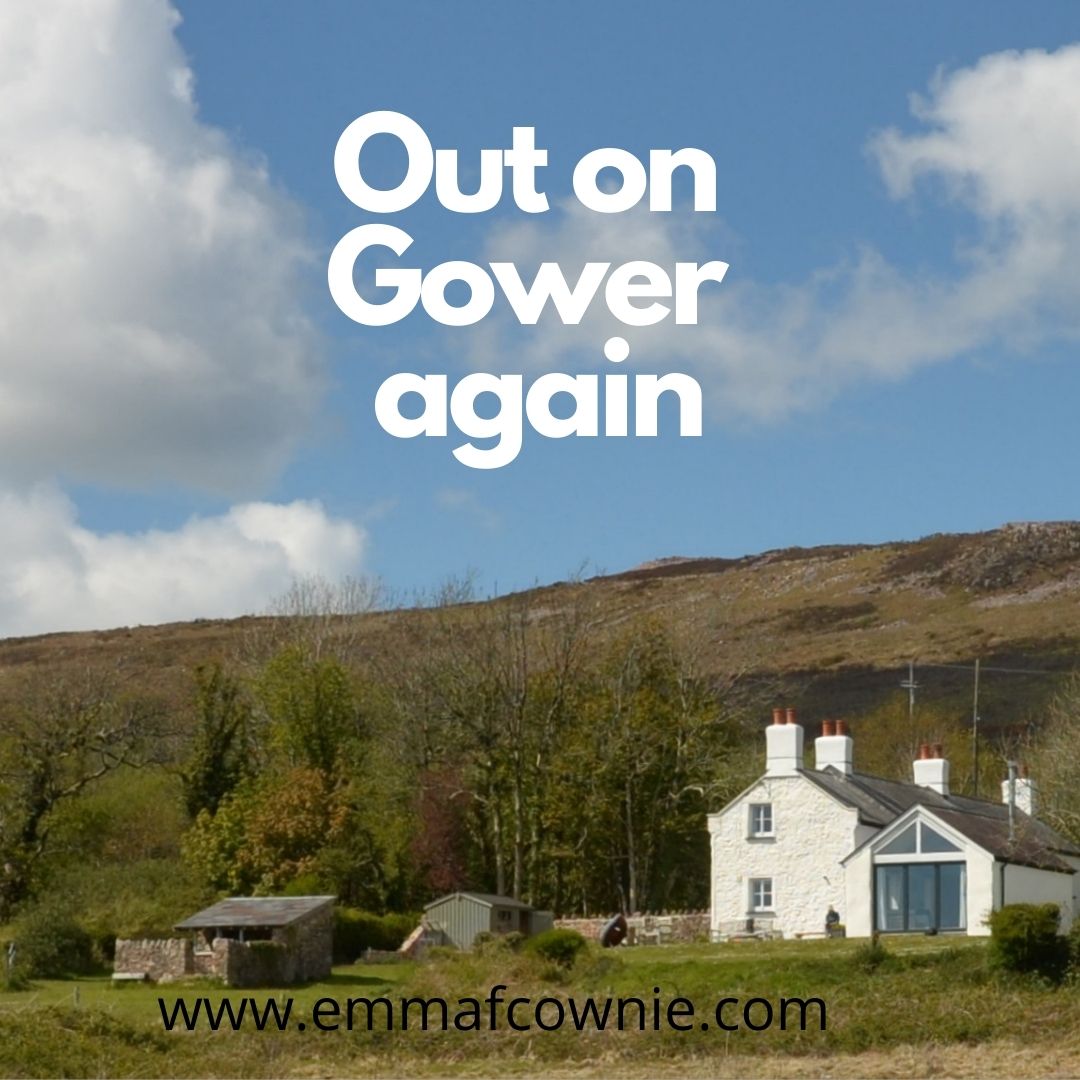 On Thursday afternoon I went on my first proper “Walk” with a capital W since I broke my leg and ankle last spring (read about my horrible adventure here).  It’s not that I haven’t visited parts of the coast since March 2020. I took numerous short strolls along flat grassy parts of Gower (Mumbles, Oxwich and Pennard) last autumn before we were launched into the never ending autumn/winter lockdowns. Thursday was the first time I really challenged myself  and ventured along tracks that I would not have thought twice about walking along before. We left the dogs at  home to give our full concentration to walking (and not tripping up).

Life recovering from a broken leg and ankle is all about surfaces and angles. A lot of my walks involve looking at the ground. I make myself stop when I want to look at the scenery. Rough ground can be challenging for my ankle. Going down hill is a lot harder than going up. I often think of my ankle as being like my sewing machine foot when I try and make it  sew thick fabrics! Unfortunately, my sewing machine foot has been known to fall off. I am not sure if that’s a reminder to take care or its just not a great analogy.

My ankle doesn’t just have to contend with up and down movement but side to side movement too. I have done a lot of practicing standing on my left leg and on my toes. My muscles are 90% there but not quite what they once were. I have been told that I have to keep doing the exercises until the left leg/ankle is as good as the right one.

Cefn Bryn at our backs and the “cottages” of Penmaen.

Anyway, Thursday was election day. Something I had completely forgotten. I usually get out and vote first in the morning but I had been waiting in for a delivery of paint and it had slipped my mind. That is until, we arrived as Penmaen and saw the “Polling Station” sign in the car park. “Oh, no!” I wailed. “The suffragettes will be spinning in their graves. I have to vote!” “Perhaps, you could vote here?” my husband, Séamas, suggested hopefully. “No it doesn’t work like that, you have to vote in your own area with a piece of paper and a pencil. It’s not that hi-tech, yet”. “Oh” he said.

We usually launch ourselves down an uneven track towards the coast but Séamas was worried that the uneven gravel  would be too much for me. I agreed.

So I thought about it, and came up with an alternative route.  We turn off the the right and along a wide grassy path across some fields. This was a nice gentle stroll. I paused and admired the view. Behind us was Cefn Bryn and the cottages that line the main road. They are hardly visible from the road, partially hidden by stone walls and trees. From here you could see that these houses all have very large windows from which to see the magnificent views. I wondered how many of them are holiday homes and how many are lived in all year around.

The waters of Oxwich Bay sparkled off in the distance. The tide was in.

Once we walked across the field I faced my first challenge as the path dropped away down hill. Gower really isn’t accessible to the disabled, is it? I thought to myself. That’s why you only see the really elderly at Rhossili where they have  a massive car park and wide tarmac paths.

Our solution was for Séamas to walk right up in front of me so I could rest my hand on his shoulder for extra balance if I needed it. That worked surpingly well.  I found that so long as I went really slowly, and I mean REALLY slowly, shuffling really, I was fine. We finally reached the coastal path and turned left.

Here the path enveloped in Nicholston Woods. Stretches of the path had bluebells scattered amongst the trees.

The next section seemed to plunge off into the distance and I almost lost my nerve. As I said, down hill is a lot harder than up hill for me. “We could shuffle down on our bums, if its too difficult?” I suggested. “No, it will be fine if we go slowly” said Séamas.  So we did our slow shuffle again, with Séamas in front: “I can fall onto you I said”. Thankfully I didn’t need to. There are no photos of this part except the last bit where I got more confident again as it was uphill.

At the top there is a beautiful old wooden gate where you can pause and take in the view of Great Tor. Adders (Britain’s only poisonous snake)  have been seen along this part of the path already this year. I saw one once many years ago near here. It wasn’t interested in us, it just moved away quickly. We didn’t see any today.

The next part of the track was easy but lengthy and I could feel myself tiring a little. I was cautious about over doing it and not being able to get back to the car. PTSD makes me conjure up the worst scenarios in mind at a moments’ notice. I briefly, I imagine the amubulance and emergency services having to rescue me all over again and me having to explain why I thought a coastal walk was a good idea. Time to rest and stop thinking daft thoughts. Séamas is with me. I am not alone. I have not broken my leg again. We find a bench and look at the view and listened to the birds singing.

Now I know I should be sensible and just turn back and go home but I really want to see Three Cliffs. It’s been so long. I have learnt that if I want to go far with this leg/ankle the trick is to go slow and steady. Speeding off does it no good at all and it start to hurt. So we carried on. A little more slowly.

Finally. This is the view I came for! I sat down and rest and looked across the bay. We watched the cloud shadows as they moved across the land. It was wonderful.

Finally, we decided to return back to the car. I decided to face the uneven track. As its uphill, it might be OK and it was.

I had to stop and rest several times, but I made it! I was disappointed to discover that I had walked less than 2 miles. I felt like a much bigger adventure than that! It was an important step to restoring my confidence again.

When we get home I staggered off to the local polling station to vote. All covid measures were in place. All the doors were open, there were big circles on the ground to tell people where to stand in socially distanced queue. Fat chance! As usual, there was me and the election people and no one else. The majority (60%) of people in my area don’t care about the suffragettes and don’t bother voting. The masked-returning officier was behind a screen, she did not touch my polling card.  I went into the polling booth to cast my vote but found the usual pencil on a string was missing.  This threw me. The returning officer had a collection of pencils on her table. I dug around in my bag for a pen. I noticed that one of the candidates lives in Penmaen.  I wonder if we passed their house today. So at least one of those houses is lived in all year around. I cast my votes and folded up the three sheets of paper and pushed them into the large black metal box.  The suffragettes can rest easy.

I waited to see if my leg and ankle would hurt afterwards. They weren’t too bad although both legs ached a bit from unaccustomed walking and that kept we awake in the early hours until I took a painkiller. I was too tired to paint. I am still feeling very tired three days later, but I think I will be back to normal tomorrow.

15 thoughts on “Out on Gower again”