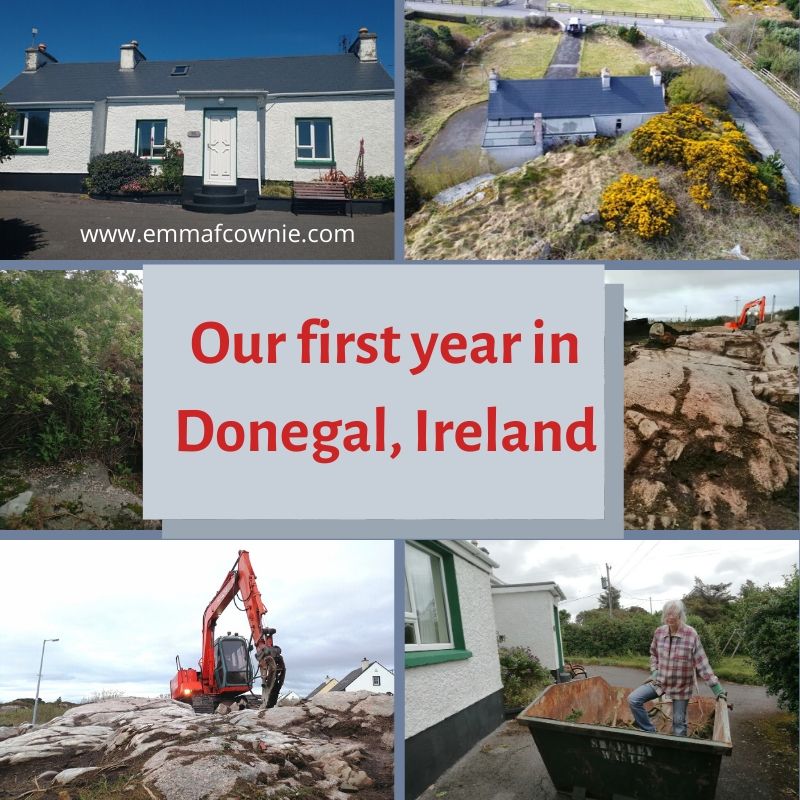 The landscapes of Donegal, Ireland have provided me with so much inspiration for my art I thought I’d share some background about our house just outside Burtonport. My husband, Seamas, has spent far more time and effort than me on Meadow Cottage. Thus, this blog post is a bit of a photo-essay as I have been absent for about half of these events. I have stayed behind at home in Wales, feeding our pets and keeping the Art business ticking over.

1. I thought I’d start with the Estate Agent’s photos. In Ireland, estate agents are called auctioneers, in the US I think they are known as realtors. Kenneth Campbell’s aerial photos are great, and doesn’t the yellow gorse look pretty? I changed my mind about gorse, later. What attracted me to the house (other than its location near Donegal airport, as well as walking distance from Burtonport, the ferry to Arranmore Island, a garage shop and  Dungloe a short drive away) was the fact that unlike many Donegal homes, it had two rooms upstairs.  Why do I care about an upstairs? Well, firstly I have only ever lived in a house with stairs and secondly and more importantly the light is better to paint by. Especially if it comes from a north-facing skylight. That will provide steady cool light. There was no north-facing sky-light only south-facing, but that could be easily changed

In our first spring visit, we concentrated on essentials for the cottages. Thankfully the previous owners were very generous in including a lot of furniture with the cottage so we just had to think about buying things like pots and pans and bedding. We started to explore the area.  There was a large area behind the rocks which was overgrown with gorse and brambles. We made some inquiries about getting someone in to do the garden, but they didn’t quite come to anything.

2. Summer visit. Everything had grown. A lot. The grass was now waist-high! The brambly bit of the garden at the back now looking like something out of a sleeping-beauty nightmare.

We looked around at the gardens around us and saw a lot of neat lawns and hedges. Oh dear, we were the neighbourhood scruffs. We had a lot of work to do here. We had brought an electric grass-strimmer with us. It wasn’t much good.  There was just too much grass. Even after Seamas had cut it was still a foot deep! Steep learning curve! We bought a petrol strimmer and Seamas studied it carefully. He would be back!

In the mean-time, we hacked away at the biggest interlopers in the garden. There were a couple of fir trees that had spread their seedling all over the grass and were also sprouting up through parts of the drive. They were also blocking the view of drivers pulling out of the side road onto the road to Dungloe. They had to go. I hacked down one with a hand saw and Seamas and I cut down the larger one together (you can see it behind him in the photo below).

We painted things like fences, walls window sills and the gate.

The cutting things down then extended (rather belated in our stay) to cutting back the gorse. There had been gorse fires in the spring that had been extensive and destroyed one family’s holiday cottage. It had been an important source of income for them.  So I wanted to get rid of the gorse near the cottage. It had grown so much that it came up to the back windows of the cottage. We hired a skip and started to fill it. It was hard work. I am not used to it. Still, we got stuck in.

It’s springy stuff. I jumped up and down on it a lot.

We filled it up and when the skip was collected by Paddy Sharkey, he managed to jam a fair bit more in the skip and jump on it.

It was back-breaking stuff. What you needed, Paddy said was a “man with a digger”. We got the number of the man-with-a-digger, and a lot more besides, Tom Ham, and he called round to look at our rocks and gorse. Yes, he could do something with it, in about 6 weeks time. So we left for Wales, with plans.

3. Seamas came back in the to autumn to report back on some improvements he’d arranged to be done whilst we were away. Pauric Neely had put clear glass put in the front door to let light into the hallway.

Seamas painted the back of the house and got the hang of the petrol strimmer.

Best of all, Tom had removed the gorse by the back of the house. It was gone!

That was great. The brambles were still lurking behind the rock. That was the next stage of the project. It was somewhat fortuitous then, that Seamas’s flight was canceled. He actually went to the airport and waited for his flight. He watched the two-engine plane starting the approach to its landing but very strong cross-winds prevented it from landing. So it returned to Dublin!

Part 2: – Seamas decided to stay another week for the next stage in the work. This was clearing the land behind the rocks and preparing the foundations to put in a couple of wooden clad cabins to act as an art studio and an art gallery. This was a lot of work.

Finally, the brambles are gone.

There’s a lot of land here!

Seamas has achieved a massive amount over the last year. He’s so happy when he’s in Donegal. He loves our cottage. He is never happier than when he’s working on it. There’s a lot more to do. He has more plans that he’s hatched with Tom, that I am looking forward to happening. I think that when I am back in the spring that I will be planting a lot of grass seed! I am looking forward to my second year and hoping to spend much more time here.

I would like to thank Kenneth Campbell, Pauric Neely, Paddy Sharkey, Paddy Campbell,  Lucy of the Parlour Shop, who drove up from Killybegs on a Sunday evening (with her mum) to deliver a table and last but definitely not least, Tom Ham, for all their excellent work.

Update: June 2020 we had a portacabin art studio (designed by Séamas and Stephen Primrose) and built by H.E. Haslett Co. Ltd of County Tyrone delivered. It looks great. If you are wondering, the giant window which is positioned to for the northern light,  is round the other side.

As you can see the garden has GROWN! I hope the insects and wildlife are all enjoying the overgrown garden. My broken leg and the pandemic prevented a another visit (and a lot of gardening) in 2020.

I am really looking forward to using this studio later this year (all going well with vaccinations, fingers crossed)!

Big window on the far side

In a meditative manner, to the music of Eric Satie’s gorgeous “Trois Gymnopedies”, I attempt to describe how working close to nature but in the city is a major influence on my painting, blending with my technique to create my artwork. In fact, place and painting are inseparable. I am greatly influenced by the light and beauty in Wales and around the Swansea area in particular. Most of my paintings inspired by the bountiful beauty that surrounds me, the sounds as well as the images. You might even notice the odd inspiration that made it to be a painting too (as well as the odd painting of my inspirational Swansea). Welcome to my Attic Art Studio and the place that inspires much of my artwork.
https://vimeo.com/104913701