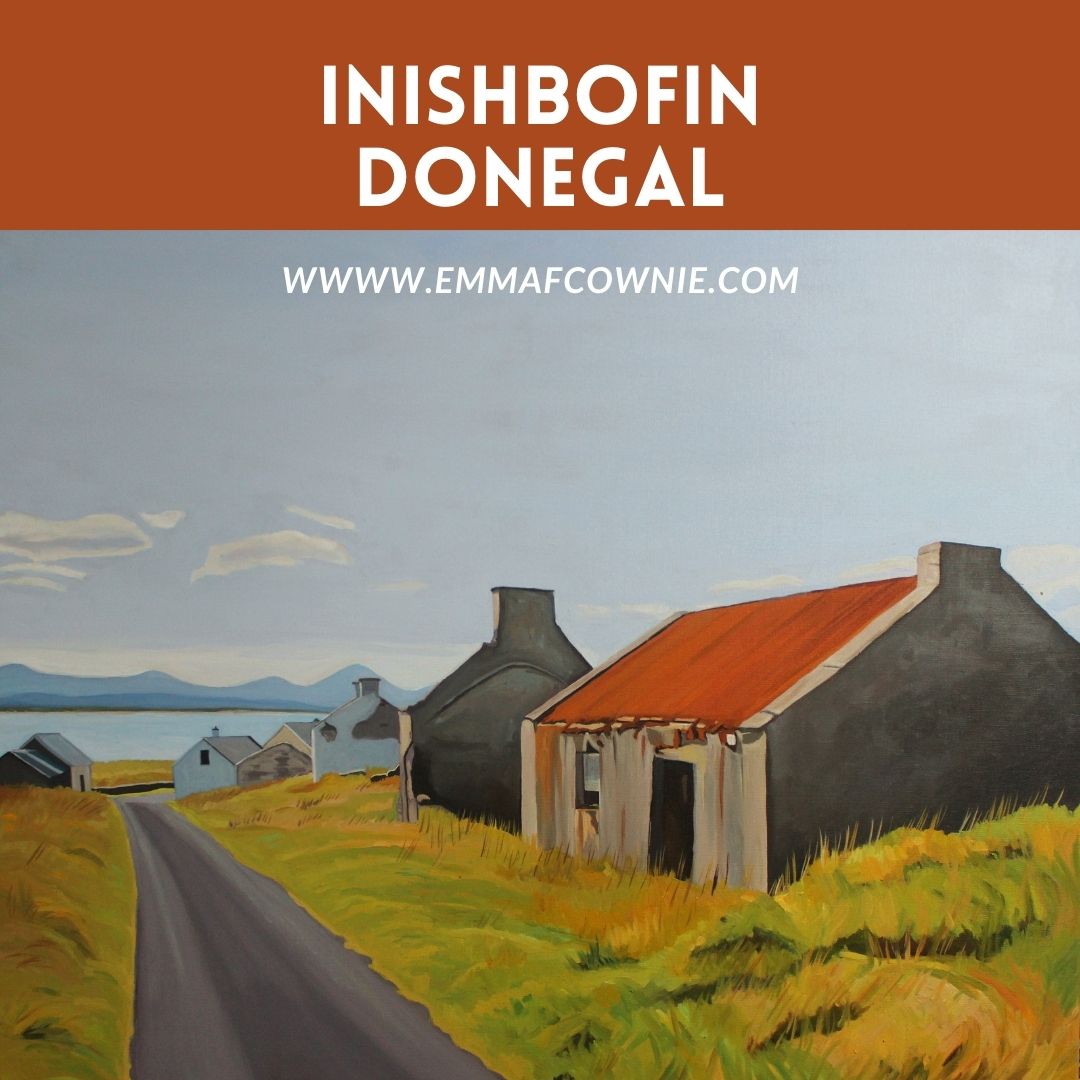 Our visit to the island of Inishbofin last month was one of those rare “perfect” days in life.  The weather was warm and sunny with enough of a sea breeze to blow away any viruses. We have been looking and admiring from afar the tiny, remote island of Inishbofin, off the coast of Donegal, for quite a while now.

It is 3km/2miles  from the pier at Machaire Uí Rabhartaigh / Magheraroarty  but that didn’t stop me painting the shoreline of the island a couple of years ago. I also wrote about the island (here) long before I ever got the chance to visit it.

It is very easy to confuse the Donegal island with the more southerly Inishbofin near Galway on the internet as google likes to show you maps and ferry pages for the Galway island, even if you type in “Ferry times inishbofin, Donegal”. I think this must because a regular ferry service in Donegal was only started this summer by Harry Coll and his brother, Owenie. Harry has recently retired from his life as a fisherman in Killybegs, Donegal, and decided to buy a boat called Saoirse na Mara II ( which translates, I think, as “Freedom of the Sea II”) in order to run a daily ferry service to the island. As far as I can tell, they have not received any government funding to help them in their venture.

You will notice that the flyer for the ferry is in Irish and English. This is an Irish speaking area of Ireland, the Gaelteacht. This was the first place I heard Irish spoken this year, in fact.  Inishbofin is an Irish-speaking community and it was a real pleasure to hear people speaking Irish/Gaeilge,  although I could only pick out the odd word as I only have a very basic understanding of the language. We were told by the islanders that “Inishbofin” is  actually pronouced “Inish-bofin-yeay”. You can here that pronunciation in this Irish-language video here.

The name Inis Bó Finne means “island of the white cow” in English. The white cow, Glas Gaibhnenn, was owned by a blacksmith on the mainland but was stolen by Balor, the mythical one-eyed King of neighbouring Tory Island and hidden on Insishbofin. This wasn’t any old cow, it was a magical cow. It had huge teats that never ran dry which produced an unending supply of milk. Obviously, such production required a great deal of fuel and in no time the cow ate all the grass on the island and had to move on elsewhere. The island is tiny, a mere 2km long and 1km wide or about half a square mile/300 acres so I could well believe that the Bó Finne ate all the grass pretty quickly. Yet, although it looks tiny from the mainland yet it doesn’t feel that tiny when you are on the island.

The first inhabitants are believed to have been of Scandinavian origin, who arrived at the time of the Viking raids on Ireland’s coast in the C9th and C10th. Their descendants are thought to have been exterminated by Cromwellian soldiers in the mid-C17th. I wondered whether they had all been killed as I noticed that all the islanders had blue eyes, possibly suggestive of Scandinavian genes. Subsequently the island was settled by mainlanders from Donegal escaping oppression, poverty and famine. We met one islander who jokingly said his family had “recently” moved to the island,  in the 1840s.

It is said that the islands potatoes, like those of neighbouring Tory Island were unaffected by the potato blight which destroyed the main food source of Ireland’s peasantry in the mid-C19th. The blight, and other factors (such as criminal mismanagement of resources by the British Government) led to An Gorta Mór  or “The Great Hunger“; starvation and famine fever which led to over a million deaths and mass emigration.

As recently as the 1960s, a population of roughly 120 islanders enjoyed a tranquil, if tough, existence, fishing and farming. Nowadays, only a few islanders spend all year on the island, farming on a part-time basis. Many of the houses on the island  have been renovated, mostly for use as holiday homes. From March to October many of the former inhabitants return to fish for lobster, crab and Atlantic salmon, or to gather shellfish and pick edible seaweeds such as cairrigin (carrageen) and creathnach (dulse) from the rocks. Other families move back for the school holiday in the summer months. The new ferry service has made visiting the island even easier for families and day trippers.

The morning we visited the island there were lots of people waiting at the Magheraroarty Pier for the ferry and the Coll brothers made several trips to bring them all over to the island. The trip only took ten minutes and the sea was smooth.  Stepping off the ferry we were transported to a tranquil and calm world. All the time I was on the island  I saw one car and heard only birdsong and the wind. It was bliss.

Inishbofiners working on a roof

Drying in the sun

The island has two halves connected by a narrow, sandy col. There are two villages on the island, one near the harbour of An Clachan (Cloghan), and the other a short distance away at An Garradh Ban, also known as East Town.

Map of Inishbofin from http://www.boffinferrydonegal.com

The southern half of the island is fertile and was cultivated in the past in the traditional “clachan and rundale” manner, involving communal usage of scarce arable soil and cattle pasture. The ancient field boundaries are still in place, though the fields have now reverted to grassland, providing essential habitat for geese and especially corncrakes – flourishing here, unlike in the rest of the country.

The islanders are very friendly and several people stopped to chat to us to tell us about the island. They have a reputation for speaking to visitors (preferably in Irish Gaelic, but in English too) and like telling stories about the island and its history. One of the islanders, Daniel,  mentioned the mystery of the missing millionaire. In 1933 Arthur Kingsley Porter, a professor of Fine Arts at Harvard University, bought Glenveagh Castle in the heart of the Derryveagh Mountains and made it his home. He also built a house on Inishbofin which he used for weekend breaks with his wife. On the morning of 8th July 1933 Kingsley Porter disappeared after going for a walk the morning after a massive storm, and was never seen again.

Conspiracy theories abound. Had he accidentally fallen from a cliff or had he taken his own life? Had Arthur been murdered? Or had he faked his own death and re-emerged with a new identity on mainland Europe? All of these are a possibility, as Arthur was gay at a time when it was illegal and regarded as deeply shameful (50 states criminalized same-sex sexual activity until 1962). To make things worse, Harvard, Arthur’s employer was running an anti-gay campaign. The college held a secret court to expose and expel gay students and faculty. Two students, accused of being gay, had already died by suicide. Arthur was fearful his homosexuality would be revealed and there would be a scandal. So here we have a possible motive for suicide.

At the inquest – the first to be held in Ireland without a body – his widow, Lucy, told of her frantic six-hour search with local fishermen. “I think my husband must have slipped off the cliffs, fallen into the sea and been carried away,” she said. Some of the islanders thought that his wife might have done away with him. Yet at the same time there were rumours of a boat that had been seen near the island at the time of his disappearance. If anyone had the money to start a new life in a new country it was Arthur, and Arthur knew Paris with its gay nightlife well as he had studied there as a student in 1923. I suspect however, that if he had started a new life in Paris, he would have eventually been recognised by one of the many American emigrées who also lived there.

Anchorage on Inishboffin is too exposed to leave boats afloat and so they are pulled up onto the foreshore.

Inishbofin has witnessed a number of maritime tragedies. In 1929 an island fishing boat was cut in half by a steamer in thick fog off Bloody Foreland, and all but one man drowned. Another boat was swamped in 1931 in the “keelie”, the sound between Inishboffin and InishDooey. During the Second World War, in December 1940, a Dutch ship by the name of Stolwiik broke down after leaving a covoy in a westerly gale. The Arranmore lifeboat made truly heroic rescue of the crew. Read more about it here.

The island has a stunning coastline and a view that include Mount Errigal, the Seven Sisters and seascapes stretching from Cnoc Fola to Tory Island.

I will end with some a film and some paintings of Inishbofin by the very talented artist Cathal McGinley. His paintings were on exhibition in the parish hall on the island – my photos aren’t great but I hope you get a sense of the intense colours and energy of the paintings. Cathal chatted to us outside his beautiful cottage for over an hour and kindly gave us a cup of tea and a bag of carrigeen.

It was quite a shock getting off the ferry at  the busy pier at Magheroarty after the incredible peace of the island. We will be back.

Getting there – The Ferry

Find out more about Inishbofin

More about the mysterious “death” of Arthur Kingsley Porter

Mystery of Glenveagh’s lost millionaire comes to the fore

About the boats and maritime incidents