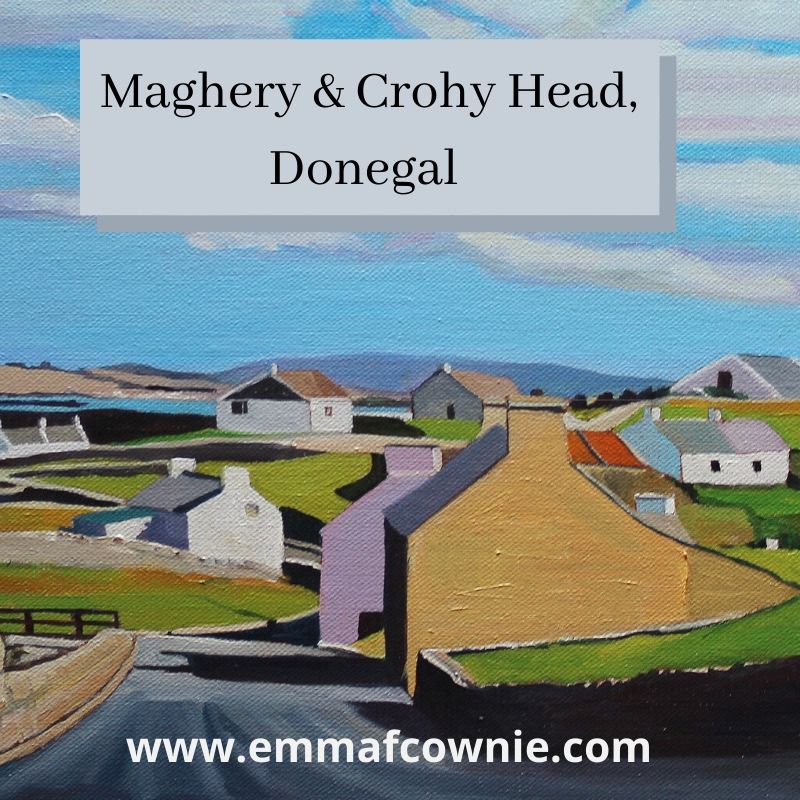 We are all told to stay local in Wales, until July anyway. I am still recovering from the operation to pin my broken leg so all of my journeys are very short, and very slow, anyway. I have been taking more adventurous journeys of the mind to Donegal, and to the little village of Maghery in particular.

It lies just a stone’s throw (4 miles or about a 10-minute drive) down the road from Dungloe (I regard Dungloe as the center of my universe when I am in Donegal because it has supermarkets like Lidls, Aldis, Supervalu, and The Cope).  The Irish name for Maghery Glebe is An Machaire. We know that people lived here over 5000 years ago because they built stone circles, left tombs, a Crannóg, and a stone fort.

We have only ever been to Maghery twice. On both occasions, it was to visit Crohy sea arch. We failed to find the arch, but we did see some very fine sea stacks called Na Bristí on our second visit. We also found found two beautiful beaches, a Napoleonic signal tower, and Second World War look out post and my favouite, and an Éire Sign.

I would like to visit again, but instead, I can only visit online and “in paint”. The drive through the village has inspired my latest series of three paintings. (The first two paintings have gone to collectors in France and the USA). I was drawn to paint the pink and mauve old houses in particular, mixed in with the white stone cottages.

Its only now that I realise the mauve house in my 3rd painting is a very similar colour to the early morning sand on the pristine beach nearby.

People have been looking out at the Atlantic Ocean and the surrounding land from the hills near Maghery for hundreds of years. They haven’t always been admiring the view, either. During the Napoleonic Wars, a signal tower was built on the headland in the years 1804-6.

This was one of a series of 12 towers built along the Donegal coastline, to watch out for invasion from French forces. We dont have these in Wales, although Wales invaded by a French force in 1797. That’s beacuse it was not built to protect the Irish population from the French, but because the British did not trust the Irish not to welcome the French with open arms. A few years earlier Irishman, Wolfe Tone, had attempted but failed to land a French force near Lough Swilly. The plan had been to throw the British out of Ireland. His landing failed but there was a successful landing of French forces further down the coast in Mayo. A brief declaration of an Irish Republic followed, but the Irish Rebellion ultimately failed, after a series of battles in Wexford culminating, in defeat at Vinegar Hill.

The signal tower is thus a symbol of deep mistrust by the British. This particular tower is well preserved and surrounded by walled farmer’s fields. The men who were garrioned here communicated with neighbouring signal towers by raising and lowering a large rectangular flag, a smaller blue pendant and four black balls in various combinations along a system centred on a tall wooden mast. This must have been very difficult if not impossible in poor weather conditions.

About 200 meters down the road is the Second World War Eire sign. I am not sure why but I was more excited to see this than the tower. Perhaps, because it was tucked away, designed only to be seen from the air. Perhaps also beacuse it is cut into the grass like a prehistoric chalk horse.

The letters spell the word Éire, which means “Ireland” in the Irish language. Over 80 of these numbered Éire signs were dotted around the coast of the Republic during the Second World War. I originally thought this was to warn German bombers that they were flying over a neutral country. This was important as neighbouring Northern Ireland, being part of the United Kingdom, was not neutral. I was wrong, the main purpose of these numbered signs was as a navigational aids for the Allied planes.

Although the Republic were offically neutral they were indirectly involved in the war. In the Spring of 1939, expecting another European War, the British Government had asked the Irish Government to set up a Coastguard Service. The Irish Government agreed to build a series of small concrete huts, known as Look Out Posts (or LOPs) along the coast. There is this one at Crohy and there was another on Arranmore Island near by. The letters Eire (without the accent on the “E”) were written in stone nearby to give aircraft an idea of where they were. The stones were painted white. The numbers (74 in the case of Crohy) were added in 1942 after the Americans entered the war in December of 1941. (Thank you to Séan Bonner for this information).

These huts were pre-built in parts and assembled on site by the army (as the Coastguard Service was under the control of the army). The Irish Government agreed to build the huts and set up the service but on condition that they only would supply radios to the huts in the event of a war. Coast watchers worked around the clock in pairs, reporting every activity observed at sea or in the air by telephone.

Allied aircraft were allowed to fly over the Republic through the “Donegal Corridor” to airbases in County Fermanagh. These airbases were crucial to provide “cover” for the shipping convoys that came across the Atlantic bringing industrial raw materials and food to Britian. Without fear of air attack, German U-boats would operate as ‘wolf packs’, picking off the ships one by one. All flights were meant to take place at “a good height”. If any aircraft crashed, as at least six did, if they could claim they were on a non-combative mission, they would be repatriated. While it was easy for Allied pilots to make that claim, it was not realistic for Luftwaffe pilots to do so, they tended to be interned. Ireland also helped Britain in secret by setting up an armed air/sea rescue trawler called the Robert Hastie at Killybegs, Donegal, to help any shipping casualties and to supply planes that had run out of fuel.

I didn’t realise it at the time but this is just an updated version of the Napoleonic tower. The ruins above the Eire sign is that of a coast watch station. Coast watchers worked around the clock in pairs, reporting every activity observed at sea or in the air by telephone.

Further along the road is Crohy Head. I think techically is Crohy Head, South. Although there is space to park and a sign announcing its presence, you can sense that the local authority are not all wildly keen to promote this attraction in case people fall down the steep field/cliff face trying to get a good look at it.

I am sitting here with my pinned leg resting on a chair, and it’s twitching unhappily at the sight of these photos now. My leg does not like to think about rough terrains right now. I can just about manage a slow walk around my local park these days (it’s going to be a long slow build up to full recovery). We must have been mad! I thought so at the time too. Still, my husband Séamas who climbed down to the beach to take some photos whilst I sat on the hill holding onto some yapping dogs. To my shame, there was an artist with his easel painting en plein air at the top of the field. I wonder if he could hearing me hushing the dogs and telling Seamas to hurry up.

Sadly, the light was, in my opinion, in the “wrong direction” and early morning would be a better time of day to catch the sea stacks. The sea arch, was just out of sight around the corner. I think that I will save up and buy a drone to take photographs from higher up without imperilling any of my (or my husbands’) limbs! Or a boat. Things to dream about from my chair.

Here is a marvelous drone photo of Crohy Head.

As with all of Ireland, you scratch the surface and discover an ocean of history. These are some of the sites I used for research:-

http://maghery.ie/maghery_history.html – this is an excellent site