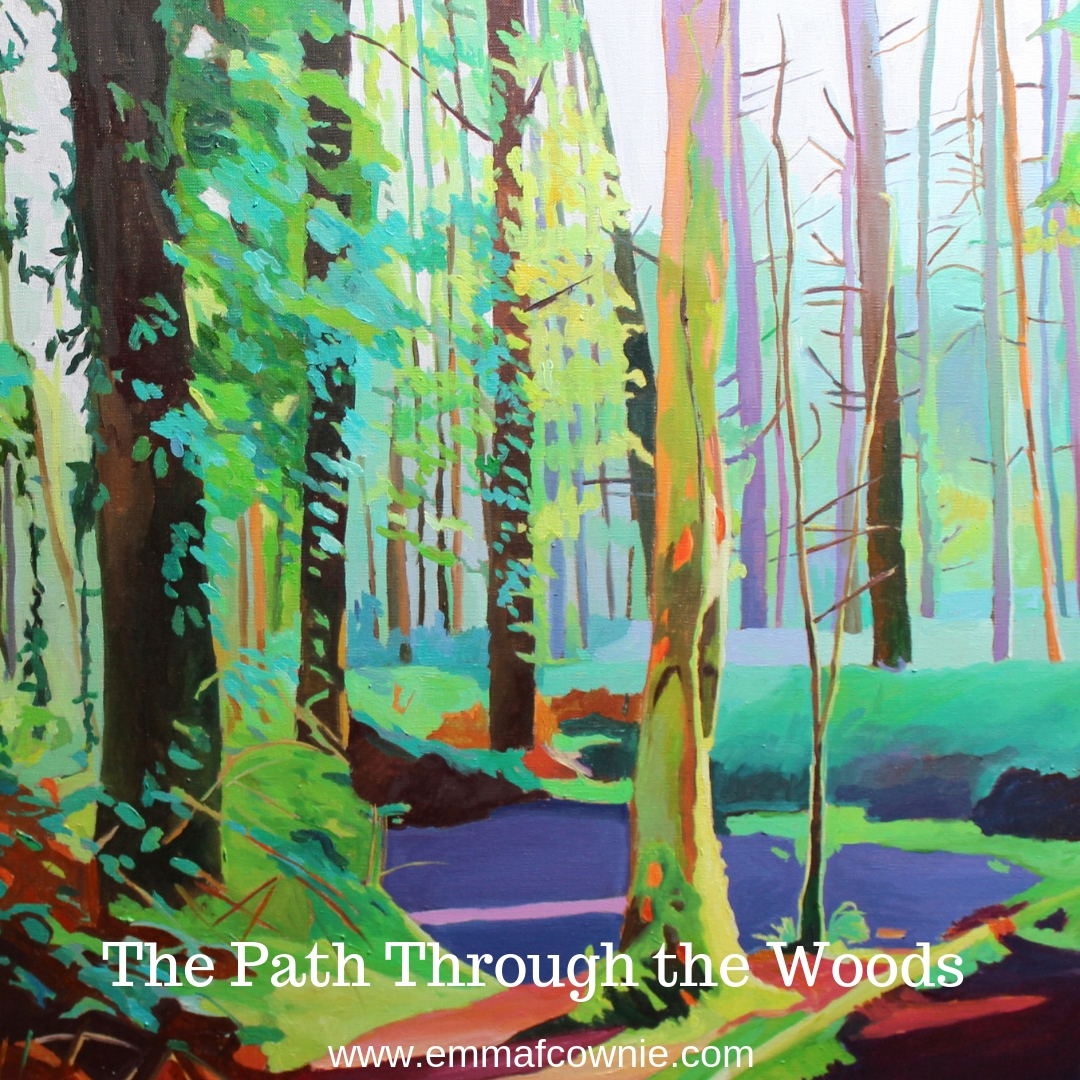 This is my most recent woodland painting of the pinewoods near Parkmill and Illston, on the Gower Peninsula.

I am taking a pause for now as we preparing to go away to Donegal, Ireland, soon. We feel in great need of a holiday.

We have not been away for a couple of years and I haven’t flown for over a decade! I am a very rusty traveller! I am really looking forward to visiting this remote corner of the Republic of Ireland. 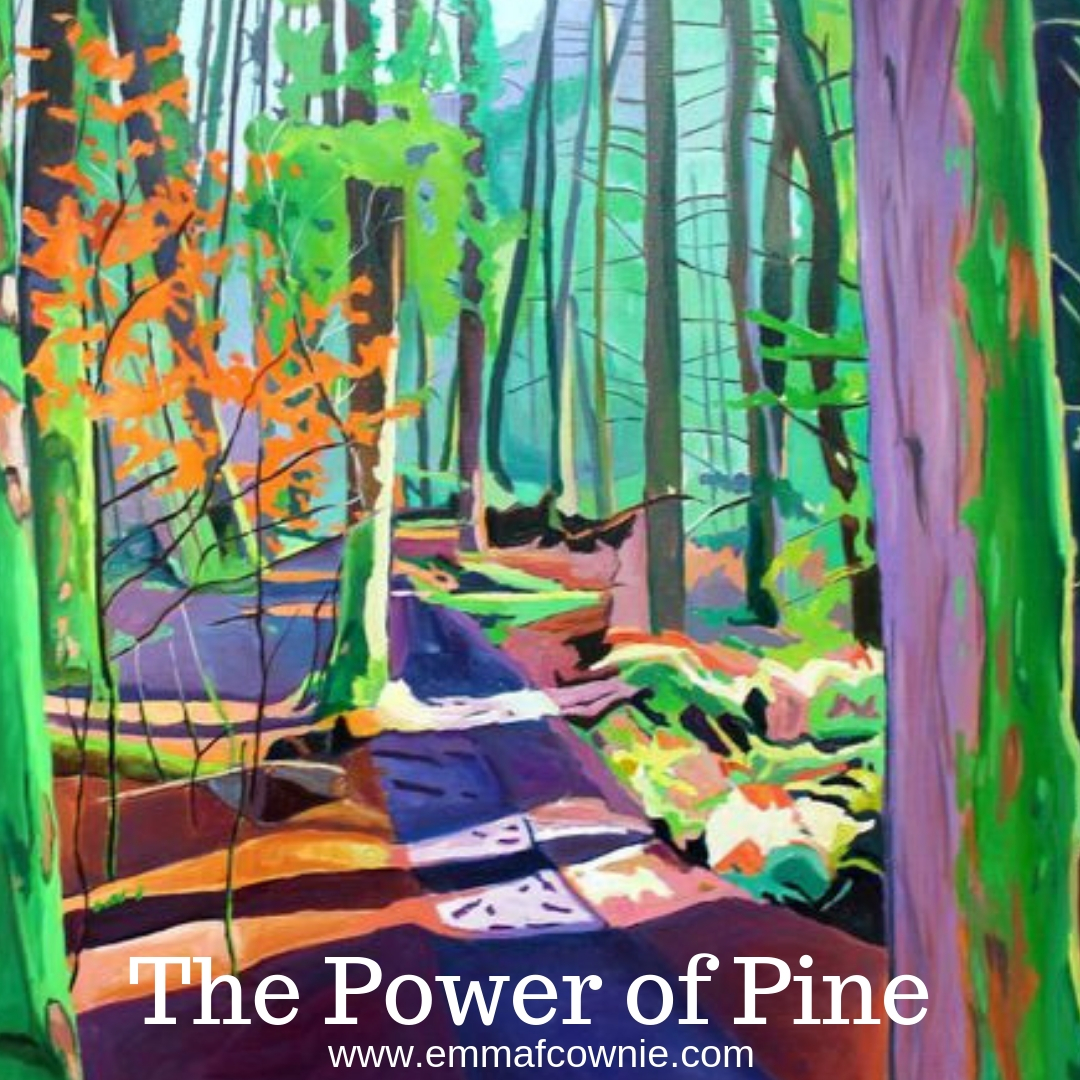 My grandfather, Fred Cownie, used to work for the forestry commission, buying up Welsh farmland and planting swaths of conifer forests. Sadly, I never knew my grandfather as he died before I was born, long before my parents were married, in fact. Apparently, he was a sociable man who was popular with the farmers and forestry workers alike and I like to think he enjoyed his work talking and with people and tramping across the Welsh landscape. Sounds like a great job working with trees and people, not stuck in an office.

I love trees. My favourite trees are the elegant beech trees, with their copper autumn leaves. I also love the scotch pines that pepper the Gower peninsula. There’s a woodland at Whiteford point and also near Parkmill, which I have returned to time and again to paint.

Scotch pines are the only truly native pines to the UK. They spread across the British Isles after the last ice age but in Wales, the trees became extinct about 300–400 years ago, due to over-exploitation and grazing. I don’t know when they were re-introduced on Gower but this section of woodlands was almost certainly planted by a local landowner, possibly the owners of nearby Kilvrough Manor.  Amazingly,  mature trees grow to 35m and can live for up to 700 years!

We walked the dogs here last week and took photos. I like this section of woodland as the pine needles on the ground deaden footsteps and although birdsong can be heard, it seems quieter than the surrounding beech wood. Much of the wood falls into the shadow of a the valley side and direct light does not hit the trees until late morning in the winter.

When the light hits the trees it illuminates their scaly orange-brown bark. This bark develops plates and fissures with age. The twigs are green-brown and pretty much hairless until you reach the highest parts of the tree, 20 to 30 metres high. I love to stand looking up at the tops of the trees, swaying with the wind. On the ground the tree trunks appear stock still. I like to think its a good analogy for life, you have to bend with the wind.

The great thing about Scotch Pines is that they are so quiet and light, unlike conifers forests which can be pretty dark.

The sun went in so whilst I was waiting for it to reappear I filmed this 360 degree shot, I tried to pan very slowly but I don’t think I was slowly enough! There is a stream nearby that has dried up from lack of rain over the summer. It sounds daft but when I am out walking I often ponder their stoic nature. They can’t move, they have to accept where they are in the wood. Some people believe that they communicate with each other through their roots. I’m not sure what my grandfather, Fred, would have made of that!

You can but limited edition mounted prints of Gower woodland here 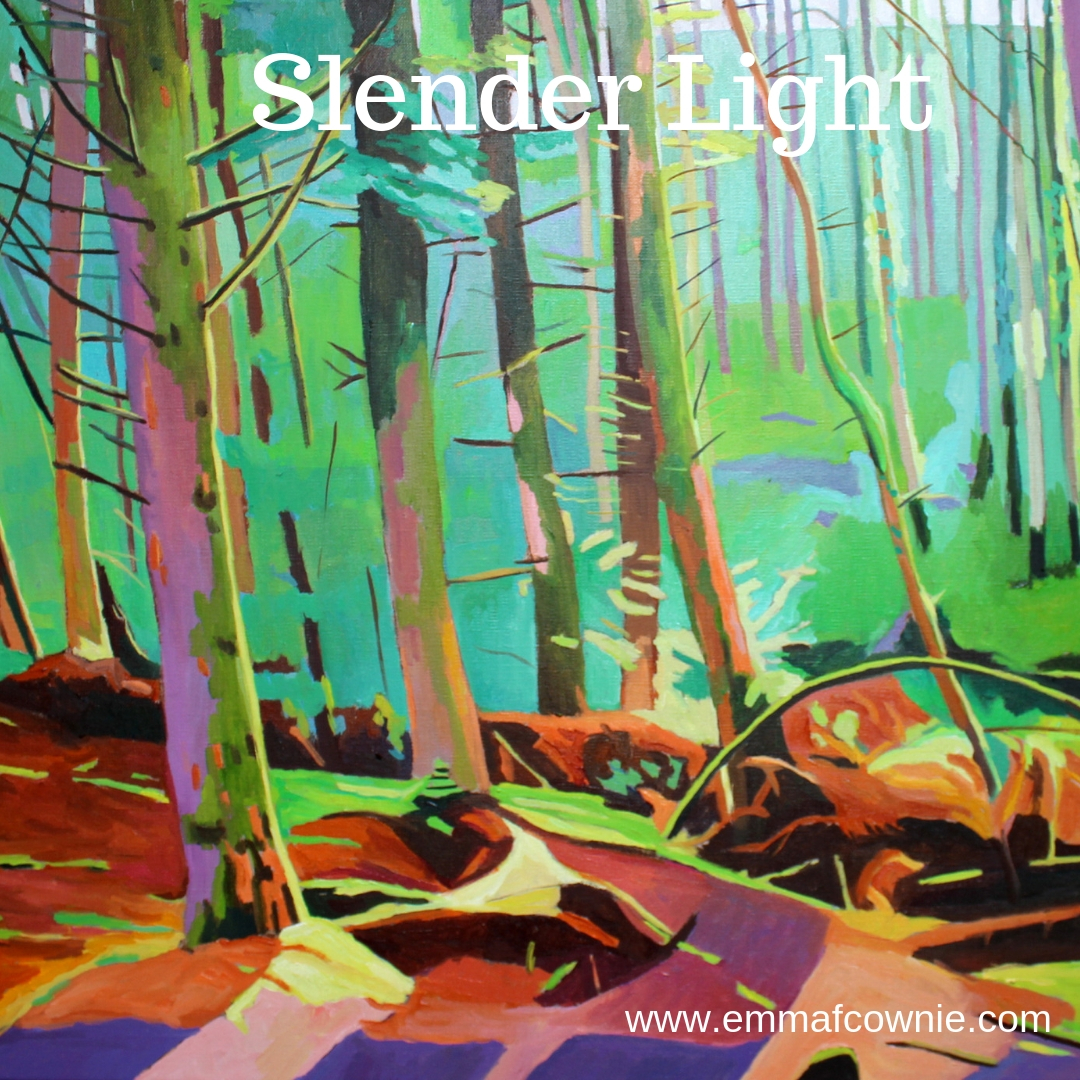 This is the first woodland painting I have done for quite a while. This is a section of pine woods called Canisland Woods, near Ilston and Parkmill, Gower.  The slender light refers to the beam of morning sunshine light breaking over the lip of the valley. The pine needles on the ground are soft and deaden any sound. It is a very peaceful section of woodlands.

As an artist, I am always looking how to simplify shapes/colours so that there is an semi-abstract element to them but never losing touch with realism. This is particularly true of my woodland paintings. Although I am working from photographs, I am not copying them but rather deconstructing (in my mind) and then slow reconstructing them (on the canvas). They are like a giant jigsaw puzzle.

It’s painful and I find the mid stage of these paintings a bit distressing until I have faith that it will come together and make a pleasing painting. Some paintings are easy and there is little struggle. Sometimes, the struggle will last a couple of days. I have to ignore the voice in my head that says, “it’s rubbish” and “you are wasting your time”. Thankfully, the negative voice is usually proved wrong.

With all of my paintings, I like to pursue a theme over several paintings so that I get into a “groove”. I feel that I am now in the groove with “Slender Light”. 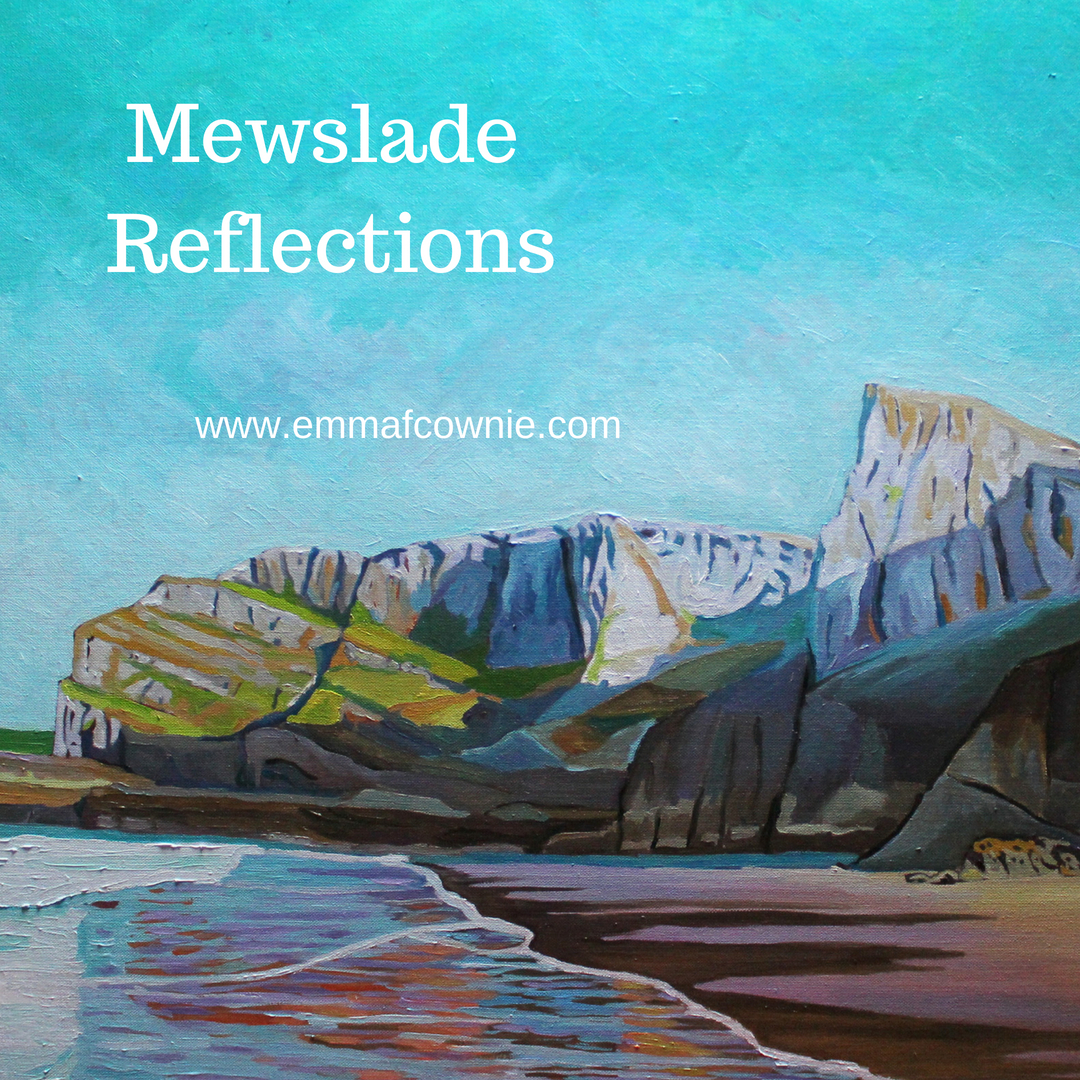