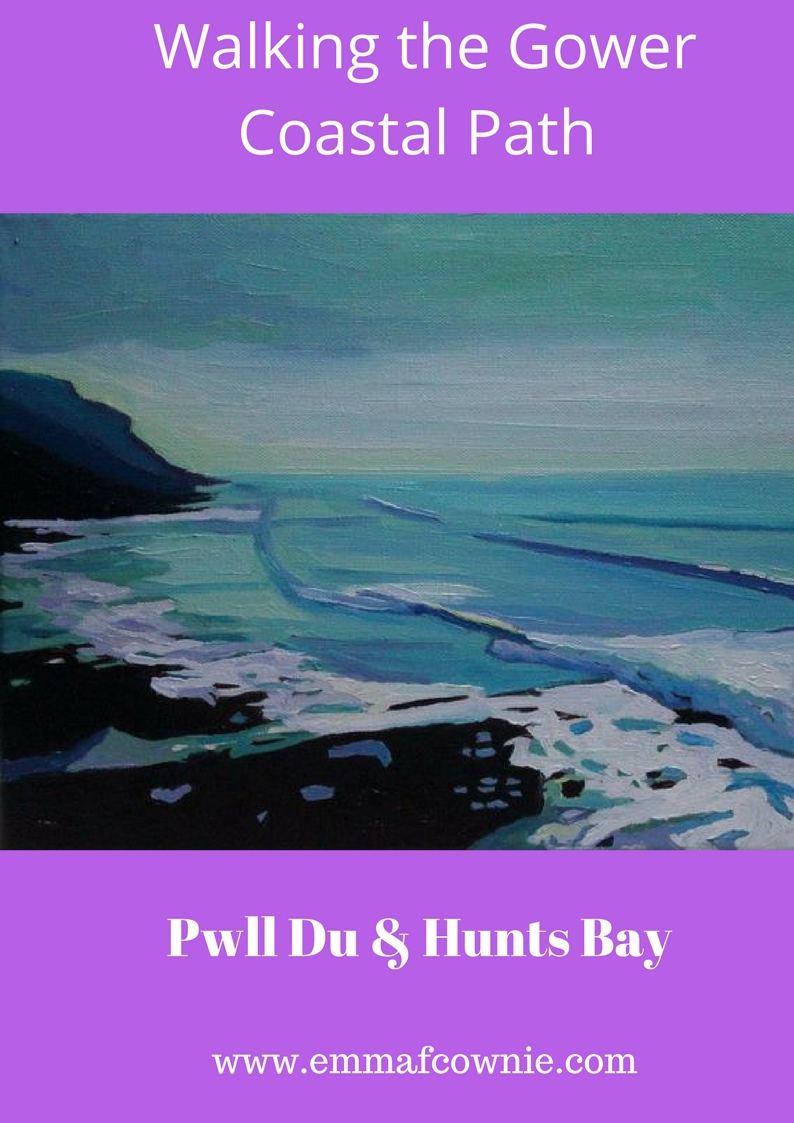 In my last blog I quoted Welsh Historian and writer Wynford Vaughn Thomas, who called the Gower Peninsula “a secret people hug to themselves”. Brandy Cove may well be the secret that the people of Bishopston “hug to themselves” because it’s a short walk down a lane from the village for them, but the secluded Pwll Du Bay is much bigger secret as it is only accessible to the public on foot, horseback or bike. Yet, its just along the coast from Brandy Cove.

There are two coastal paths you can take here, the one that hugs the coast gets quite difficult in places (so bad you have to use all fours to get up one bit I seem to remember) so I took the path that trails further inland and higher, hoping it would be less arduous.

I checked on my map to make sure that this was a legitimate path, this time. Yes, there are two paths.

I have to retrace my steps back up the path back towards Bishopston and then take the path through a field and up into some woods.

There is no sea in sight but I trust the map (and I have walkers going up this path so must led somewhere good).

Once I cross the field and enter woodland, the lands rises but fortunately there are a series of steps cut into the earth. These steps are a godsend as well used paths easily become quagmires, even in what seem to be relatively dry conditions (as is the case with the woodland path around Oxwich Head) .

The step are like a my very own Gower-workout. I have to pause three quarters of the way up, I pretend to myself its to check the view, but really it’s to catch my breath.  At the top there is a wooden stile with a helpful yellow arrow signposting the fact that this is a an official path although not the coastal path. As I come out of the woods and onto the top of headland and I am rewarded with a fantastic view of Brandy Cove and Caswell to the east of me and Pwll Du Cove to the west.

I think about stopping to eat a jam sandwich and a chocolate biscuit but it’s starting to cloud over a bit so I decide to press on to Pwll Du in the hope that it will still be sunny when I get there. Once I cross another stile the path becomes wide enough for 4×4 vehicles. This track is not open to the public.

Once upon a time this track was a lot busier as this was part of the only route between South Gower and Swansea. As I round the corner, Pwll Du Bay comes into sight.

Pwll Du, means “Black Pool” in English. I have puzzled over how to convey how the name it sounds (as I am not a Welsh speaker), you can either go to google translate and type in “Pwll Du” and then click on the little speaker icon or accept my shoddy anglo-approximation of “Poulff-Dee” which does not really do justice to the breathy Welsh pronunciation.  I’d welcome other people’s suggestions. I sit down by the river in the sun to eat my “elevenses” which consisted of two jam sandwiches and two chocolate biscuits. The healthy banana was left for later.

Anyway, Pwll Du is a bit of a puzzle. Here’s what looks like a little Brigadoon in the the middle of nowhere that is very difficult to get to.  In Pwll Du. There are three houses, and as you walk into the Bay, you pass another house on the right that has been abandoned.

Part of the answer is in the seclusion of the place. Like Brandy cove, this was a good place for smugglers to bring ashore wines, spirits and tobacco. This carried on in the 17th and 18th century until Prime Minister William the Younger slashed the sky high duties on tea, wine, spirits and tobacco and taxed things like bricks and tiles but also things that rich people liked such as gold and silver plate, men’s hats, ladies’ ribbons, perfumes, hair powder, horses and carriages, sporting licences and most famously, light, or rather windows. If you have ever wondered why the Georgians like to brick up window, it was a form a tax avoidance! The other part of the reason why a tiny community grew up here was lies in the the rocks; The limestone.

Pwll Du Bay was ideal, it was made of limestone and had easy access by sea. Limestone was quarried here on a massive scale and up top 30 ships could be moored in the bay at any one time. These thirsty visitors were enough to sustain at least two public houses, “The Ship” and “The Beaufort”. There are suggestions that there may have been as many a 5 pubs in the valley! The abandoned house I passed may have been either ‘The Bull’ or ‘The Star’ and a pub called the ‘New Inn’ apparently lay some way up the valley on the Swansea side of the river . The two pubs on the beach were later converted into tea rooms but are now both private houses. The Ship Cottage can be rented as a holiday cottage.

Pwwl Du’s seclusion also meant that during the Second World War some of the several German submarines that secretly sailed up the Bristol Channel used to surface, under the cover of night, to collect fresh water from Pwll Du. Apparently,  but no one actually saw them doing this so it may just be a good story.

Pwll Du Bay is a sand beach smothered in pebbles and is a popular destination for local secondary schools’ Geography field trips. There were two schools here when I visited.

The river that snakes its way down the wooded Bishopston valley seems to be get swallowed up by the pebbles. This is quite odd. I think that this might be what the geography students might be studying. There is a tiny footbridge that crosses the river before it vanishes under the pebbles. I love the wrought iron flourishes that make me wonder if they used to be someone’s garden gate in a former life.

Once I had crossed the little bridge I climbed up another steep path with those Gower-steps cut into the earth.

At the top of the path is a holiday cottage – there is a choice here either carry on the road for a slightly shorter walk or follow the coastal in a large loop around the top of Pwll Du Head, called High Pennard. This used to be an iron age fort and is one of the highest headlands on the Gower. Here the Gower-steps are surrounded by delightful posies of primroses.

The view is well worth stopping for. To the east is Pwll Du Bay (below left) and to the east looks towards Pennard Cliff and Cefn Bryn, which is the name of that russet sandstone ridge off in the distance (below right). Just below you, looking towards Pwll Du, is a cliff known as Graves End. Its called that because its near where a ship called ‘The Caesar’ was wrecked in 1760. Its a very sad story because many of those on board who drowned had not chosen to become sailors but had become “press-ganged” . In other words, they were kidnapped by the navy and forced the serve on the ship. We know that some men from Port Eynon were recruited in this way and “press-ganging” was an occupational hazzard for all young men who lived and worked near the coast. Tragically,  when “The Caesar” sank , many of the press-gang men were locked below deck and so died when the ship hit the rocks. They were buried in a mass grave at Graves End.

If you follow the road, you pass this cottage with old fishing nets and buoys in the garden.

On the otherside of High Pennard is Deep Slade, or Hunts Bay. This is a bay I hadn’t visited before this coastal venture. Day trippers are discouraged from driving up this way by “Private Road” signs. Apparently, it was once a sandy beach, but the sand has pretty much gone, leaving a very rocky cove. The loss of sand has been blamed on sand dredging in the Bristol Channel.

It was at this stage in my walk I decided I needed to answer the call of nature. There seemed to absolutely no one around. So leaving my rucksack by the road I clambered over a five-bar gate and got behind a suitable hedge. Of course, it was at this moment I hear the clip clopping of a horse and after a few moment a rider (female, thankfully) comes by. She can see my bag and she’s craning her neck to see what I am doing. Drat. I feel very silly. After a moment’s pause I wave to her and shout out to her that I am answering the call of nature (those were not my actual words but you get the idea). This seems to satisfy her and thankfully, she moves on. I wait awhile before I clamber back over the gate. Fortunately, she’s long gone by then!

It’s a ten minute walk to Pennard Cliffs and the bus but I’ll describe this part of the Gower Coast in my next post.