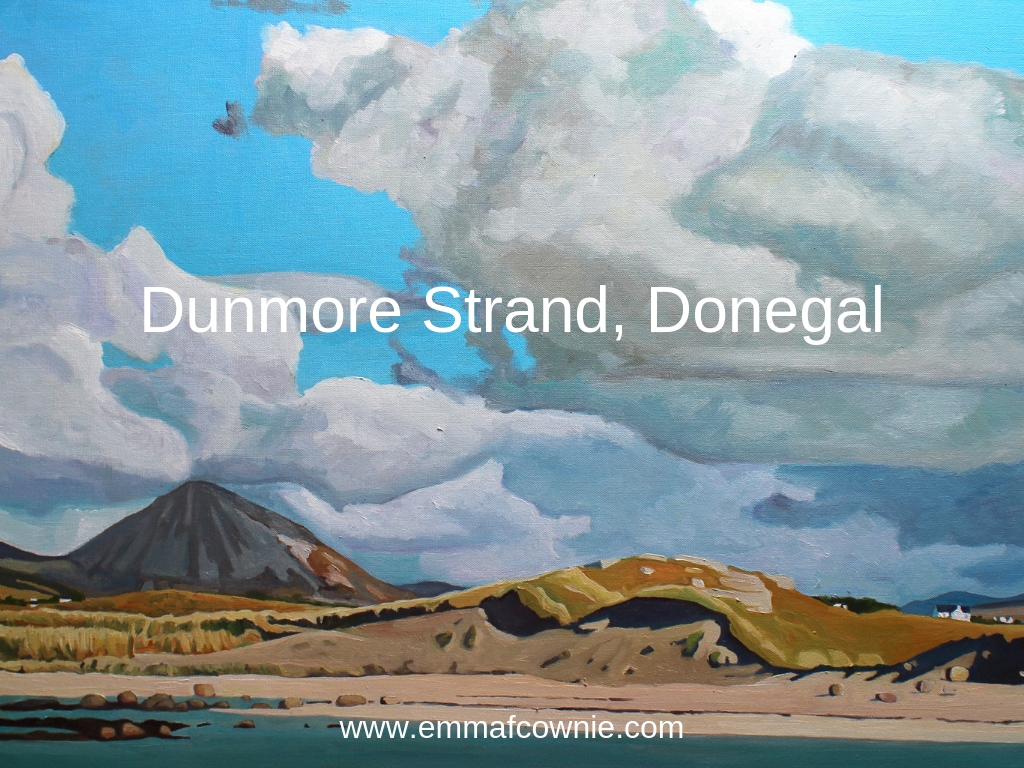 I have been ill this week so this is a short post.

In last week’s post, Seamas, my husband and I were standing on rocks looking out towards Gola island in Donegal. This week we are looking back inland to Dunmore Strand, and beyond to Mount Errigal.

As soon as I saw this scene I knew I wanted to paint it. I loved the dark shadow under the protruding lip of the undulating dunes.  It gave the impression that the grasses were merely a thick blanket laid across the top of the sand.

Scattered along the beach and in the water, were granite rocks. These were so large that they were more like massive boulders. They were a beautiful pinkish colour close up. The sand was also very slightly pinkish but closer to the shoreline it was almost white. Lines of seaweed marked the rising and falling tide.

The tiny white houses gave a sense of sense scale of the dunes. They reminded me a little of boats on the surface of a heaving sea; humans eeking out an existence on the edge of nature. The ocean itself was calm and benign. It was as clear as glass at the shoreline and further out was a beautiful turquoise. It is not always this smooth creature, in autumn, I have seen it roaring and thrashing the shoreline like a wild beast.

Mount Errigal dominates this part of West Donegal, known as Gweedore. The mountain looks close but it’s an optical illusion, it’s actually about 10 miles away to the east. The top of Mount Errigal was swathed in clouds. The mountain always seems to have clouds around its shoulders, or totally smothering it. I had to wait for about 3/4 of an hour for the mists to part for a clear view of the peak. The clouds near to me were dirtier rain-filled clouds that were building and threatening to release their burden on the land somewhere nearby.

Another wonderful thing about this beautiful beach is that on this chilly April afternoon is that there was not another soul there. The only people we saw were the postman in his van on the way down the long lane to the beach.

My next post will peer “through a glass darkly” at Seamas’s Donegal family history (it is very dark in places) and the History of Gweedore along with the controversial issue of modernizing landlords.