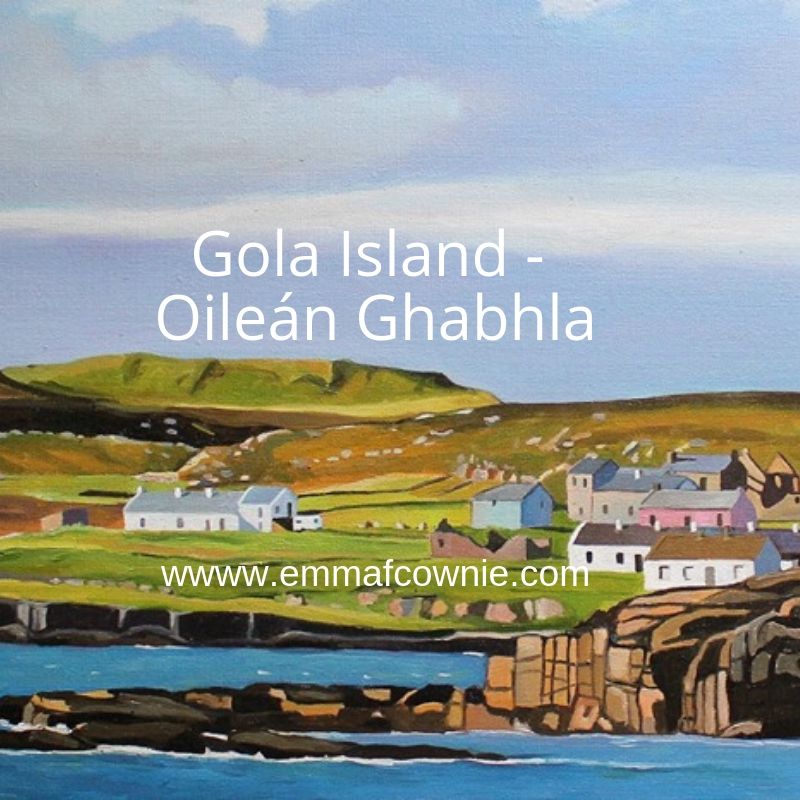 Gola is a Donegal island I painted and thought about long before I set foot on its shores. I have written about it before here. Last month I was fortunate to visit it. The wind had woken me in the night. The early dawn had me awake by 6.30.  I felt so tired and my limbs ached that I drank the last can of caffeinated energy drink that was sitting in our fridge (leftover from the epic drive up north).

We drove the 40-minute drive from Burtonport to the little harbour at from Magheragallon Pier, Bunbeg.  The final part of our drive was along single-track road across flat grasslands which were home to both a graveyard and a golf course. That sounds grim but there’s plenty of space for both here.

It was the most perfect of days. The sun was shining, the sea was sparkling and flat and the sky was a hazy light blue. The sand was very light, but not white. The sea was incredibly clear and on a clear day like this, you could easily see the seabed, giving the sea a beautiful turquoise colour.

The pier is well set up for waiting travelers with benches and a portaloo. We sat on a bench and waited for Sabba the boatman to give to signal to get on board. Seamas, my husband, tells me that Sabba the boatman has been sailing since aged 7. He has a facebook page here where he will post times of sailings and photos.

It’s only a 15 minutes crossing. As soon as we set foot on the island, I am struck by the sense of peace here. Most of the sounds you are of nature. Birds singing. Sheep bleating. The wind. That’s it.

This is because there are very few motor vehicles here, one or two cars and some tractors.

Gola is in the Donegal Gaeltacht, where many people speak Irish. They are brought up speaking Irish at home and in school. So the signs are in Irish. Some have English translations, but not all did.

In 1911 as many as 169 people lived here but in the 1960s people started leaving as jobs and a better standard of living on the mainland and abroad had a stronger appeal than full-time life on the island. Only a handful of people live here all year round now.

It’s so peaceful. The land is covered vast stretches of long yellow prairie-like grass spotted with rocks and a few sheep and their sturdy lambs. The houses are scattered across the island along tracks.

Some of the houses are modern, others have been renovated and are still lived in during the summer months at least, others are boarded up but many lie ruined, without roofs or reduced to crumbling walls.

It was interesting to see the houses on Gola close up after looking across the water at them from Dunmore strand (see painting below). The houses are spaced much further apart than I supposed them to be. I was not satisfied until I had walked all the way to the southern tip of the island, so I could turn and look back at the houses. In this way, I could make sense of what I saw in early spring.

The houses are close but not that close. All of their front doors face southwards, towards the mainland. Mount Errigal and Muckish are off in the distance. I didn’t realise that you could see Muckish this far south. I suppose I have had never been here on such a clear day before.

I tried to take a photo of two camera-shy woolly donkeys in a field. They took exception to my presence and brayed very loudly at me. I got the message and left them in peace. Even the sheep eye you up, they are not used to strangers. They seem to look at you as if they are saying “You are not our farmer, what are you doing here?”.

On they way back to the boat we pass the infomation centre – an Teach Beag – its a large shed with tables outside. We are hot and I fancy a cup of tea. I try out the one bit of Irish I know on the man behind the counter “Dia duit” (“Hello”) I say. He then says something back to me which I dont understand. That stumps me. Turns out that he just said “Hello” back to me (“Dia is Muire duit”). I need to get a few more phrases/word in Irish under my belt!

This is Paddy Joe, who is 73 years old and still volunteers for the local lifeboat (training and teaching younger volunteers). It is noticeable how fit and active people in Donegal are, especially the men. We talk in English. I love listening to his accent, Irish is his first language. It’s musical. Part Ulster accent, part something else, something almost Scandinavian.  Certainly, of the north. It sort of reminds me of the halting accents of Welsh-speaking farmers in North-Wales, as they seem to trip over their words as they think the right word in English.

We decide to catch the 2 o’clock boat back as we have eaten all our sandwiches and the next boat is at 6pm. There is plenty more island to explore on another visit. We haven’t seen the sea arch at Scoilt Ui Dhúgáin, the lake Loch Mhachaire n nGall.

The boat is setting off,  when Sabba spots two girls who came across with us at 11am. He returns to shore to pick them up. They get on the boat looking very relieved. They clearly didn’t fancy waiting until 6pm for the last boat back. The sky is starting to cloud over as we cross and by the time we reach Magheragallon Pier it is overcast.