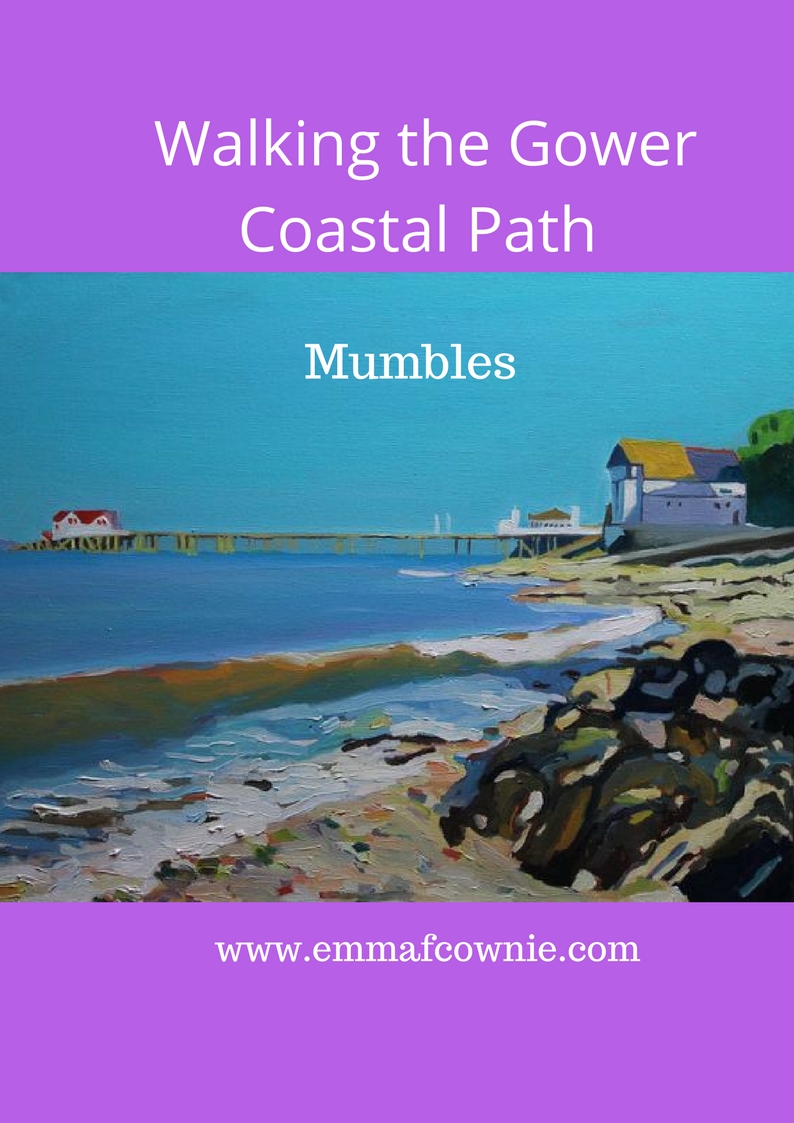 I love looking at maps. I have been gazing at the map of coastal path around Gower for days now. The Peninsula juts out westwards into the Bristol Chanel. Its about 17 miles in length and 8 miles width at its widest point. I am planning to walk around its coastline, approximately 38 miles in length, maybe a bit less.
I am, however, going to start with a map of Swansea Bay. People who have never been to Swansea make jokes about the place as if its somewhere to avoid. Quite the opposite. The hilly city sits alongside the sparkling sea and beautiful sandy five-mile beach.

I have decided to illustrate this series of post with my paintings and with (mostly) my own photographs. The paintings have been completed in recent years, some as a result of this trek, other are older. The photos are mostly from 2018 but a few are from my 2016 attempt to walk the Gower coast. I started my first attempt at Mumbles in 2016.

The pretty Victorian village of Mumbles sits at the far end of the western arm of Swansea Bay. This is where my journey around the Gower coast begins.

Mumbles was originally a fishing village. It did not catch fish but rather, oysters. It was, for a time, a thriving industry. Part of Mumbles is known as Oystermouth and many people often use the two names interchangeably to mean the same place.

Many people often associate South Wales with coal mining, and coal was certainly vital in locating the copper industry in nearby Swansea. It was the need for limestone, however, that changed Mumbles’ fortunes. Limestone was used as a fertilizer, in steel making, pharmaceuticals, and also as a construction aggregate (in other words, gravel).

Mumbles was made of limestone and that fact brought the modern world to the front door of this tiny fishing village in 1804 when the Oystermouth railway line was built in order to transport limestone from the quarries of Mumbles to Swansea Docks. This track was the world first passenger line, the Swansea and Mumbles Railway, carrying at first horse-drawn carriages, and later steam locomotives.

The trains also brought many day trippers for a time. The railway is now long gone, closed in 1960, but there remains a sturdy promenade that runs along the sea front where the trains used to run. Locals and visitors alike still love to walk its length and admire the spectacular view across the sweep of Swansea Bay.

The promenade runs up to Verdis, a popular ice-cream parlour and thence to the Mumbles Pier. The Victorian pier was built in the last years of the 19th century and was the last stop for the Railway. Here tourists could catch a paddle steamers for a tour along the River Severn and Bristol Channel. The Pier hosts a great cafe (with self-playing piano), an amusement arcade and tiny art gallery.

On the other side of Mumbles Head is Bracelet Bay.  Mumbles Head comprises two tidal islands. At low tide those with stout boots can walk out to the islands and look at the much-photographed lighthouse.

The octagonal lighthouse lighthouse was built in 1794 by Swansea architect William Jernegan, who also designed Singleton Abbey which later became part of Swansea University. This was the second attempt to built a lighthouse here. The first one started a few years earlier, designed by someone else, collapsed before it was even finished!

This is where the real Gower coast walk begins! In my next post I puzzle over myriad bus timetables and eventually feel brave enough to leave the car behind!
In the meantime here’s a cool video of a drone flying around Mumbles Head.

UK- See the book on Amazon.co.uk by clicking here.

USA – See the book on Amazon.com by clicking here