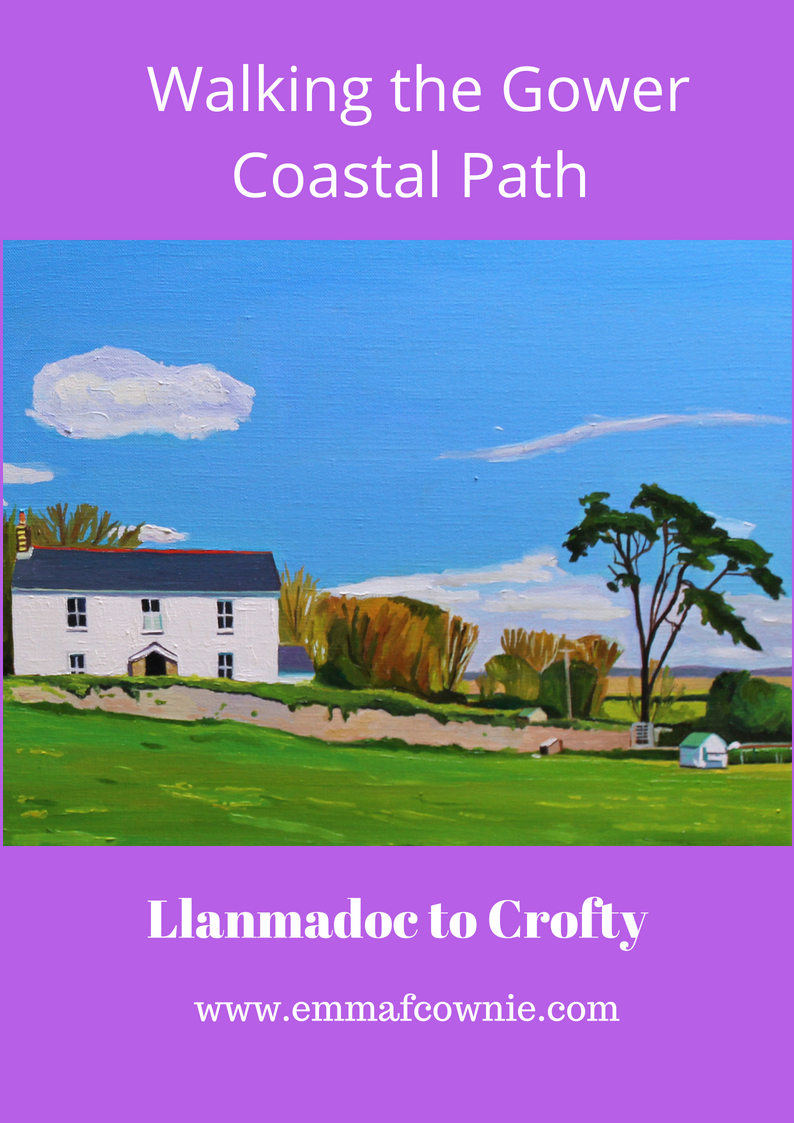 I was feeling very nervous about this walk as I would have to change buses in the middle of nowhere. I very nearly chickened and got in my car after a fellow blogger commented that I “should not bother with rural buses but drive. However, it was a long walk, just over six miles, and I did not want to break it up into two or three circular walks. I wanted to walk the length of the north Gower coast in one go, if I could.  So I got up and packed sandwiches, lots of biscuits, a banana in its strange yellow banana “gimp” case and two bottles of water. I had decided that thirst was the worst torment on my last two solo trips and I was going to be better prepared this time.

I had caught the same bus to Port Eynon (the number 119 to Rhossili, if you interested) and had changed at Scurlage but this time I had to change at a location called Llanridian Turn. I have studied the map and I think I know where it is. I don’t remember passing it from the previous bus journey and it doesn’t really seem to be “on the way” to Rhossili. So I check with the bus driver as I buy my ticket.

The bus arrives at Llanridian Turn and it pulls in behind another bus, a number 116, but its not the one I want. So I ask the driver about the 115 to Llanmadoc and he says that he’s driving it and walk towards a small bus that has just arrived and he swaps buses with the new driver. He’s a friendly chap, with a sparkly diamante earring in one of his ears. So we set off. I am the only passenger.

I end up standing at the front of the bus (holding on to the special rail) chatting to the driver for most of the journey. “You couldn’t ask for better weather” he says. He’s right. It’s a sparkling bright spring morning. It’s cold though. Only 7 degrees Centigrade (that’s 44 in Fahrenheit). He fishes out a timetable for me from his rucksack. It’s a timetable that covers all Gower buses. I have not seen this before, it certainly wasn’t to be found in the bus station anyway. “Where do you want to get off?” I have never had a bus driver ask where I want to stop before. This must be one the joys of rural bus services. I eventually get off by Llanmadoc Post Office. I wave at the bus driver as he drives away as if we are old friends.

I find a path, not an official coastal one, but it is sign posted for Whiteford Burrows, which seems the right direction, so I take it. It’s more of a farmers’ track than a path. I walk down a long muddy track, pass cattle, sheep and an old tractor and eventually reach the same point as we did on our detour from Cwm Ivy (to avoid the breached sea wall). I find it more by luck than any thing. It is very muddy.

This is Landimore Marsh. It’s a saltmarsh, an area of coastal grassland that is regularly flooded by seawater. Springs, small rivers called “pills”, flow out into the estuary, in meandering lines that make maze-patterns in the marsh. The main pills crisscrossing the area are Burry Pill and Great Pill.

For hundreds of years, the people who lived along its edge have used the marshlands for grazing their animals. They still do today.  The lambs that are raised on the salt marshes are reputed to have a distinctive and special flavour, but I cannot speak from experience as I am a vegetarian. Although the cows and ponies know to move off the marsh with the advancing tides, especially the spring tide that can move with great speed, the sheep for some reason don’t. The local farmers have to bring them in. Although sheep can swim, as all animals can, for a short period of time, if they get cut off by the tide they will drown.

The walk along the marsh path is very muddy indeed. I have visions of me sliding and twisting my ankle or falling flat on my face, but I manage to survive without incident. I take the low tide route, but I spent much of my times sliding around wondering if the high tide route would have been less muddy.

To my right is North Hill Tor, or Nortle Tor, on which are the remains of a partial fortifications, probably dating back to the Iron Age period (c. 800 BC – AD 43). According the the famous Swansea-born historian, Wynford Vaughan Thomas, Nortle Tor was quarried in previous centuries. During the Napoleonic Wars, one of its extensive caves provided useful hiding place for local young men when the press gang was spotted coming across the estuary from Llanelli.

There is a wonderful presence about the marsh. It stretches away as flat as a proverbial pancake. No sea, or River Loughor in sight. The marsh is indented by patterns of muddy pools, creeks and channels. It is very peaceful and I get drawn into the atmosphere of the marsh. The grass has a curious white-ish tinge to it which I assume is from the salt. I see a lot of sheep’s footprints but no sheep, although I can see a few ponies far away on the marsh. It turns out that the sheep are in the farmers’ fields with their lambs.

The path eventually passes a couple of houses and leaves the marsh. I see my first fellow walkers of the day.  I only see one other couple on the path today. I see, however, vast numbers of sheep and lambs, marsh ponies, robins, sparrows, a red kite and a large Great White Egret flying over the marsh.

The path reaches Bovehill, where it turns further inland and passes the remains of another fortification, Bovehill Castle, a fortified mansion with walls a metre thick. It was once the seat of the 14th century crusader knight, Sir Hugh Jonys and later Sir Rhys ap Thomas, a support of Henry Tudor (the father of Henry VIII of six wives fame).

The “coastal” path then turns off the road onto Bovehill Farm. I can’t see the sea and now I can’t really see the marsh, either.  I don’t see the marsh again for a long time, perhaps for about as much as an hour as the path trails inland. In fact, it turns out its about 2 and a half miles to Llanridian. The path instead, runs through the farmland, parallel to the marsh.

This get a bit confusing. I often enter a field and have little idea of where the path goes. So I set off at a 60 degree angle only to adjust my course when I eventually spot the stile in the opposite corner of the field.

There have not been enough walkers recently to make tracks for me to follow across the fields.

I see swallows (the first I have seen this year) over the fields by Landimore. Weobley Castle, another fortified manor house, is a dark presence looming on the cliff above me. From the time of the Norman conquest of Gower to the 15th century, Weobley belonged to the de la Bere family.

Just below Weobley Castle there is a road that leads out into the marsh.

Where does it go? It doesn’t seem to go anywhere, as such.

At the end of the track, there is a odd wooden structure out in the estuary. I can see it with my naked eye but my camera is struggling to get a good picture. I think its made of wood. I can’t tell. You can see it from miles around.

According to historian Wynford Vaughan Thomas, the American army used the marshes as a firing range during the Second World “War. It turns out that it was the US army that built the causeway out into the marshes. The strange building, is not wooden but made of concrete and brick. It was a look-out built by the Americans. I have to search online for close up photographs.

There is a very dark tale about the Burry Estuary during the Second World War that Wynford was probably not aware of, as it was kept secret until 1999. There had been rumours about the secret testing of chemical and biological weapons in the estuary during World War II for many years. This story is to do with the British government and experiments in biological warfare, not the American Army.  The wartime government had asked Porton Down, its chemical warfare research installation, to conduct trials of an anthrax bomb. Anthrax, is a lethal bacteria, which was seen as having “enormous potential” for biological warfare. I would like to point out that biological warfare was, and still is, banned under a 1925 Geneva protocol. This is why countries will make a big fuss about its use on civilians in Syria or even Salisbury, England.

In 1941 there had been a series of tests of anthrax bombs on the uninhabited Gruinard Island, off the west coast of Scotland. These tests had produced contradictory results, primarily due to the soft, boggy ground at Gruinard, so it was decided at short notice to carry out a single replacement test on the firm sand of the Burry Inlet.

On a Wednesday afternoon, in late October 1942, the scientists carried out an experiment over the north Gower salt marshes,  dropping an anthrax bomb from a Blenheim aircraft. Two lines of 30 sheep were placed downwind of the aiming mark, spread at 10 yard intervals. When the bomb fell it made a crater of about three feet in width and two feet deep. Three days after the trial, two of the sheep died of anthrax septicaemia, and three others were ill for a day or so before recovering entirely. Apparently, the scientists proclaimed the test result ‘very satisfactory’, especially as this was the first time such a bomb had been dropped from a plane flying at operational level.

According to the report, the site was ‘effectively decontaminated’ by the incoming tide a few hours after the test took place. The carcases of the dead sheep were ‘buried deeply at the seaward edge of the marshland area’. The remaining sheep were observed for seven days after the test, the survivors then being slaughtered and buried.

This all seems a bit of a casual clean up and in marked contrast to the situation at Gruinard island, which had served as the previous test site for anthrax. In that case the entire island was set ablaze and subsequently closed to public access for nearly 50 years. Even today people and animals alike avoid the island, despite efforts to decontaminate the island in the 1980s. All I can assume is that larger quantities of anthrax was used in Scotland.

Update: There’s no need to worry about the dangers of anthrax as it was confirmed in 1987 that “investigations …[after the] trial revealed no evidence of any residual contamination”.

When the path finally reaches Llanrhidian, it seems like quite a shock after all the open space of the marsh and the fields. I think about walking up to the main road where I could catch a bus home but instead I press on .

My next post will be my final stage of the coastal path, from Llanrhidian along the coastal road to the village of Crofty.