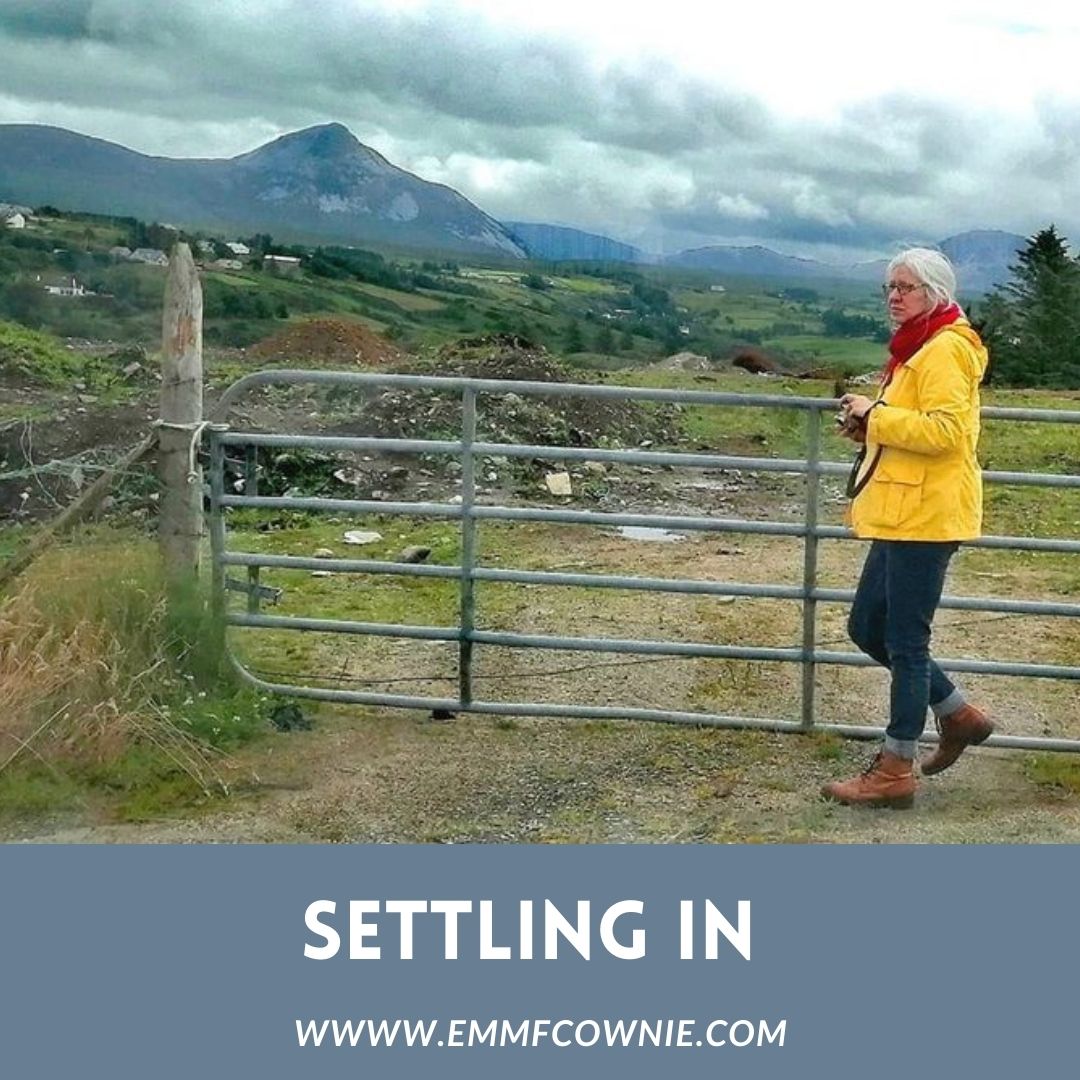 Someone told me that once we got to Ireland, “it will be like being on holiday everyday!” Hmmm,  I have had some pretty eventful holidays in the past. Funny how the disasters are more memorable that the sunny easy holidays. Let me see. Here are three that come to mind; we once got flooded in a campsite in Yorkshire, had a sleepless night holding on to the tent during a gale at a campsite in the South of France, and finally we drove a tempermental campervan around Ireland a decade ago. It only started some of the time. A helpful Polish guy got it started very early in the morning so we could catch the ferry in Wexford.

So far, this “holiday-everyday-life” is proving to be pretty good (that’s a English understatement, by the way). There were quite a few “bumps” to start with, however. A lot of things seem to go wrong at the same time.  At first we could not get into the studio, as the door lock was jammed, then one of our dogs, little Mitzy had a stroke (the vets was over an hour’s drive away), Bingo the cat got lost and finally the toilet flooded and we couldn’t use it for several days.

The studio makers sent someone all the way from County Tyrone to replace the lock so we could get in! The vets kept Mitzy in over the weekend and thank to a pile of drugs and lots of basket-rest, she has recovered well. Her balance isn’t great and her head is at a permanent tilt but she chase after the ball again and is still telling us what to do.

Ann Marie at Burtonport Animal Rescue put out a notice on their facebook page, asking people to look out for Bingo, and it was shared many times. She gave us useful advice and support too.

Thankfully, Bingo came home late at night, after the traffic had died down.  The flooding toilet issue is more complicated, has been solved for the time being but will need some more work in future.  Don’t ask me to explain it.

We had a heatwave with unprecedent temperatures of 30 degrees celsius soon after we arrived. This was very unexpected and I had thrown out a lot of my clothes during the move and I only had one summer dress. Fortunately, I did have bathers so we could go for a swim in the sweathering heat. That was fantastic. The water was crystal clear and surprisingly warm (or not as cold as I thought it would be).

As for painting. That was  bit more difficult. I was not able to paint for two months as I was either helping un/packing up the house,  paints were packed away  or I was just too exhausted to do anything. I knew it was going take a while to find my painting groove again as I needed to recover my energy levels and adjust to a new location.  I am very fussy about arranging my paints and the position of my easel and it took a while sort things out to my satisfaction. It took longer than I thought but I am getting there now.

What do I love about Donegal? The way it looks and sounds. Everytime we take a trip into the nearest town of Dungloe, to post a painting or to do our food shopping, I marvel at the views. At night, when I awake, I listen to the slience. I find it so relaxing. I had had enough of the noise of city life. Donegal is so beautiful too. There is so much abundant nature on our door step, quite literally under our feet. The length of the west coast of Ireland is called the Wild Atlantic Way,  and it really is wild in every sense.

A carpet of Flowers at Gweedore

The weather is very mercurial. I thought I was used to rainy weather, living in Swansea in Wales, but this is something else. I may awake to thunder and downpours, but by lunchtime the sun is shining and the sky is full of fluffy clouds. Sometimes it may rain, the sun will come out and then it rains again, all in the space of ten minutes. Today, we are in the midst of a gale, that no one has seen fit to name, with 50 mile-per-hour winds. Standing outside in the buffeting winds is surprisingly envigorating.  I think its the negative ions.

It may be grey all all day or the sun might come out in a bit. Passing a window, I might be struck by the beauty of the clouds.  Sometimes I point them out to Seamas, or take a photo. Often just drink them in. I hope I never stop marvelling at them.

We are now in a position to receive visitors to our private gallery, at the rear of Meadow Cottage, on a appointment only basis. We ask that social distancing is observed and that masks are worn inside the gallery.

Séamas and I look forward to seeing you