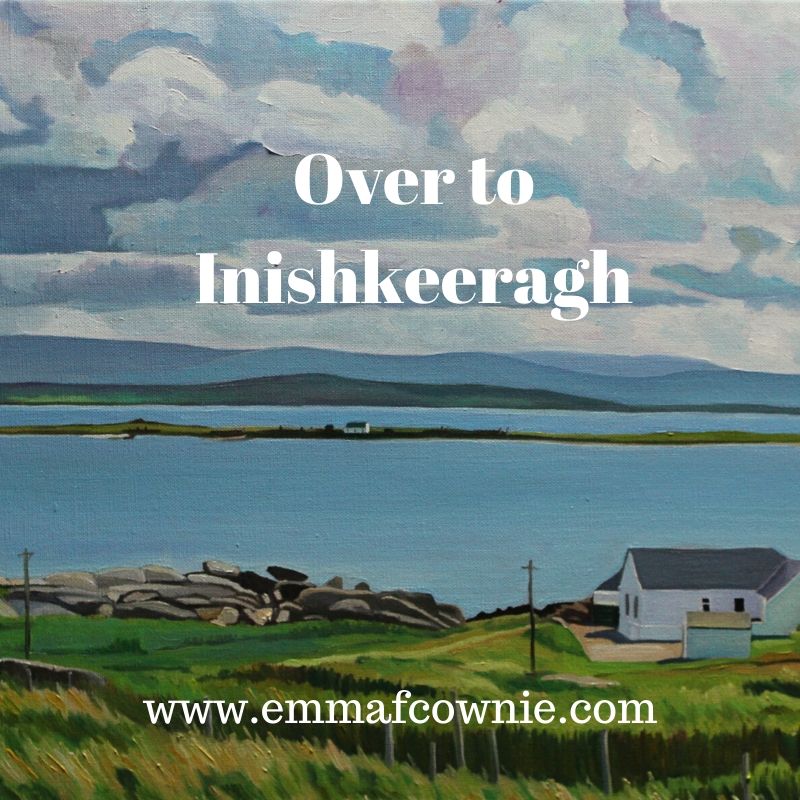 I love looking at maps and finding out the names of places. This is particularly true of the islands that litter the coast of West Donegal near the Rosses. I am always asking my husband, what island is that? He’s usually pretty good at knowing the names (I check on a paper map later). In the summer I spotted a house on a tiny slip of an island to the south of Arranmore.  Can you see it in this photograph below?

I thought it was just one lone house (was that another house at the other end of the island, maybe?). What glorious solitude! What must it be like to stay on that island all with the spray of the sea so close looking at big Arranmore? This is my painting of the island.  I was curious about the feint outlines of ruined houses I could see either side of the restored summer house. I wondered about them and their families.

This is Iniskeeragh. Ireland (like Wales) is rich in descriptive place names. They usually describe are named after features of the landscape, such as hills, rocks, valleys, lakes, islands, and harbours. In Irish, its name is “Inis Caorach” which means “Sheep or Ewe Island”. So either sheep were kept on the island (it seems pretty small for that) or its a shape reminded people of a ewe, which might be more likely?

After some research (online and in books) back home I discovered that the island had at least 12 families living there permanently, it also had a schoolhouse. I find this incredible for such a small, lowing lying island. It’s 650m x 300m (2132ft x 984ft) in size. I tried to work that out in football pitches. It’s the equivalent to 40 football pitches, so maybe its not as tiny as I think. It is very low. It’s no higher than 11 feet above sea level. Yet you can read their names in the 1901 census here. The family names of the farming families are familiar Donegal ones: Gallagher, Boyle, Sweeney, Rodgers, O’Donnell and a sole Bonner, Grace (35) who was listed in the census as a knitter, she was one of only 2 knitters on the island.

These Donegal islands may seem remote to modern eyes, but they played their part in the culture and history of modern Ireland.  Gola Island, Gweedore, may well have served as the model for Robert Louis Stevenson’s Treasure Island. Two men from Gola, Patrick McGinley and Charles Duggan, were aboard the Asgard, the yacht that brought arms into Howth in north county Dublin in 1914, in preparation for the Easter Rising of 1916.  Tiny Inishkeeargh also had its connection with the wider world. Writer and political activist Peadar O’Donnell (1893-1986) was a for a time teacher’s assistant at the school on the island and he set his second novel, The Islanders, here.  Peadar went on to become one of Ireland’s foremost radicals of the 20th-century.

Life was tough on the island. Roise Rua described her work on the island kelp-making as “tedious and exhausting”. The tenants had to pay rent of £50: £26 for the use of the land and £24 for the use of the seashore – making kelp, picking winkles or shellfish, dulse and the like.” Sadly, like many other Donegal island communities, such as Owey and Gola, the people of Inishkeeragh was forced to relocate to the mainland in the 1950s.

Sea levels played a big part as at least twice in the twentieth century an exceptionally high tide coinciding with a bad gale forced the islands to take refuge in the two houses that had lofts. They apparently spent hours “in terror, fearing the overloaded floors would collapse.” A storm in 1953 washed away the pier and the government of the day would not pay for it to be repaired. This meant that subsequent storms swept through the houses and within 5 years all the families were forced to leave the island.

There was a reunion of Inishkeeragh families and their descendants in 2015 on the island. Internationally renowned Country singer, Daniel O’Donnell, was part of the celebrations (his mother was born on nearby, Owey Island).

You can see the photos of the day on their facebook page here. You can visit the island with Arranmore Charters, be sure to book beforehand.

Roger Curry’s Donegal photos can be found at https://pbase.com/rogercurry/image/51657229

16 thoughts on “Over to Inishkeeragh, Ireland”